The Gospel of John "That You Might Believe" Chp 3 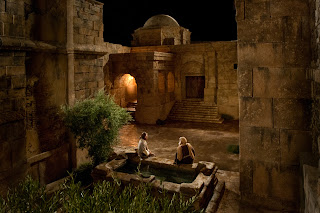 What kind of ruler was Nicodemus?
He was a member of the Sanhedrin, the council the governed the Jewish people.
The supreme judicial and administrative council of the Jews.  This council is supposed to have originated among the Jews when they were under the domination of the Syrian kings in the time of the Maccabees. This "council" is referred to simply as the "chief priests and elders of the people" Mt 26:3,47,57,59 27:1,3,12,20 etc. The Sanhedrin is said to have consisted of seventy-one members, the high priest being president. They were of three classes, 1. the chief priests, or heads of the twenty-four priestly courses 1Ch 24:1ff  2. the scribes, and  3. the elders. As the highest court of judicature, "in all causes and over all persons, ecclesiastical and civil, supreme," its decrees were binding, not only on the Jews in Palestine, but on all Jews wherever scattered abroad.

Was Nicodemus sincere in his words to Jesus?
Yes.  He seems to be very sincere?

Why do you think he came by night?
Jesus had caused great controversy in upsetting the money changers and doing miracles in Jerusalem. Nicodemus was being careful because of his position.

Jesus seems to abruptly change the subject from introductions to the spiritual. Why do you think he did this?
Jesus can see men’s heart, as John told us in the last chapter.  He knows the real reason Nicodemus is here and uses his opening words to begin speaking of heavenly things. Nicodemus says he recognizes Jesus as being from God but Jesus says he can’t even see spiritual things except he be born again.

What does Nicodemus think Jesus is speaking of?
A literal physical rebirth.

In verse 5 how does Jesus explain the new birth?
He compares it with the first birth, one of water and one of the Spirit.

In verse 8, how is the new, spiritual birth comparable to wind?
Neither can be completely understood but both can be experienced and felt. 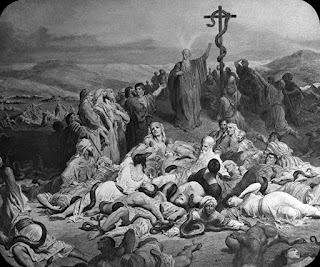 In verse 14 Jesus makes another comparison between the new birth and an OT incident.  List the similarities between the “serpent in the wilderness” and the “lifting up of the Son of man.”

According to verse 15, what is the means of the new birth.
Faith, belief, trust in the one lifted up for our sin.

Jesus words seem to stop at vs. 15 and John begins to comment and summarize what Jesus has told Nicodemus.

What was the reason God sent Jesus into the world?
The reason was love.

What was the purpose of Jesus mission?
That the world might be saved through him.

In vs. 18 what is the result of not believing?
Remaining in God’s condemnation, under God’s wrath.

The word condemnation means judgment of guilt. Why are unbelievers so judged? Vs. 19
Light (Jesus) came into the world but mankind loved darkness rather than light.

John answers with several reasons why this must happen.  What were the reasons vs. 27-31?
1. His position was a gift from heaven.  He was the forerunner not the Christ.
2. He acts as the “best man” to Christ the bridegroom.
3. Jesus must increase, John must decrease.  Jesus is from above and is greater than all.

In vs. 32, did John believe that all those flocking to Jesus really believed Him?
No, it was superficial and would not last.

In vs 36 what is the significance of the phrase “hath (has) everlasting life?”
It is in the present tense, meaning that those who believe Jesus have in their possession now and forever life.

John 3 gives us one of the clearest and most emphatic descriptions on who Jesus is, His purpose on earth and what it means to be born again, saved from our sin and redeemed by Christ’ work on the cross.
Salvation is possible because Jesus, like the serpent in the wilderness, would be offered up as the one we must look to for salvation.
That salvation is the work of the Holy Spirit touching our hearts as Jesus sacrifice for us is lifted up in scripture and in our testimony.
We must believe, put our faith in, Jesus is our only hope of salvation. We must trust that His death on the cross paid for our sin and that His resurrection proved His power over sin, hell and death.
Our believing also includes our repenting, turning from our sin and unbelief and towards God and salvation through Jesus.