John Chapter 4 Is This Not the Christ?


John Chapter 4 Is This Not the Christ?

Jesus and the Woman at the Well 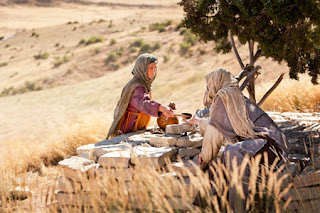 Centuries had passed since the nation of Israel had split into two separate warring nations, Israel, also called Samaria, in the north and Judah in the south. Around 721 BC the northern kingdom was invaded by Assyria and most of it's inhabitants deported. Those few that were left intermarried with other people imported by the Assyrian conquerors.  After Judah's own capture and release they would have nothing to do with their northern neighbors. They now had very different cultures, values and especially religions. Very seldom would a Jew allow themselves to travel through Samaria and never would he have any type of contact if at all possible. Into this centuries old cultural battle Jesus must quickly go to Galilee and must "need go through Samaria."

What is important about the phrase, “He must needs go through Samaria?”
It describes a compulsion to go through instead of around Samaria.  There was a need that dealt with fulfilling God’s will through this woman and the village of Sychar.

vs 6-7  What time of day was this to us?
If John counts from sunrise this is about noon.

What was strange about someone gathering water at this time of day?
It was usually done in the morning for the days cooking.

What might be an explanation as to this woman’s getting water now?
She did not want to associate with the other women because of her promiscuous lifestyle.

vs 10-11 What was living water to this woman?
It was water which flowed from a spring in the well, running water.

vs 13-14  What is kind of living water is Jesus talking about?
He is telling of a supernatural gift that would satisfy her spiritual thirst.

vs 16  Why did Jesus now tell her to get her husband?
The woman still did not understand what Jesus was saying. It was necessary to get her to look past the physical and see the spiritual.

vs 20  The woman understands now that Jesus is a prophet and she asks a question.  What is this question in reference to?
The first king of Samaria had erected golden calves for the people to worship. Temples now existed on those sites.

vs  21 What event was Jesus prophesying?
The revelation of the Messiah would redirect worship towards himself.  No temple would be needed.

vs  22  How does one worship in Spirit and in Truth?
Both the emotion, will and desire as well as the doctrine must be correct.  Emotion however sincere is not enough to satisfy God.  Doctrine without desire and sincerity is also wrong.

vs 25-26  Why did Jesus reveal himself as the Messiah here when he would not do so in Jerusalem?
In Jerusalem such a revelation would accelerate the events preceding his crucifixion, in Samaria that would not happen.  It was also needed that this woman could believe.

Did this woman believe?  Why do you think so?
Yes she did.  The proof was Her returning to her village and telling the others, “Come see a man who told me all things that ever I did.  Is this not the Christ?”

What lessons can we learn from the way Jesus brought this woman to salvation?

1)      He found a way to reach out to her despite the major differences in gender, culture and lifestyles.

2)      Was not condoning of her sin but was not harsh in dealing with it.

3)      Did not let the conversation divert to an argument about Samaritan versus Jews but brought it back to the real need for salvation through a belief in who He was.

4)      Did not deny or ignore the truth but did not use it as a club to win the argument while losing the woman.

5)      Throughout the conversation, He showed concern and compassion for the woman’s soul.

John 3 and 4 show Jesus talking to 2 people about salvation through himself, and the two people could not be more different. One a man, one a woman, one very religious, one very immoral, one a Jew, one a Samaritan, one with a knowledge of the OT, the other with almost none.

The differences are easy to see but what do both accounts have in common?


2)      Jesus deals with the person where they are and as they are. He does not use the same approach, or the same words.


3)      He uses the unexpected in both cases. “Ye must be born” again with Nicodemus and “Give me to drink” with the woman.


4)      He does not allow the conversation to veer from the need for belief in Him. Jesus remains the focus.

When the nobleman came to Jesus what was His response to the man’s request?
It was a rebuke.  Except ye see signs and wonders ye will not believe.

What did the man do after hearing Christ’s refusal?
He continued to ask.  His son’s life depended upon Jesus.

In view of this rebuke and chapter two where Jesus did not commit Himself to those who believed because of the miracles, what kind of faith does Jesus desires?
He desires faith in Himself, Trust in Him as a person and as Savior and Lord not just as a miracle-worker.
After the man’s heartfelt plea, Jesus sends him away saying the son was healed.  Why do you think Jesus may have done this?
He forced the man to believe in His word or to continue to beg for a visible miracle.  Would he take Jesus at His word or demand a sign? By leaving he exhibited faith in Jesus which was strengthened as he traveled back home and met his servant who told of his son’s recovery.

We can apply the truths to our own lives and the lives of those around coming from ignorance to saving faith and then moving from saving faith, believing in the power of Jesus, to willful obedience to one who is now our Lord and Savior.

The question for us to answer is which one am I? Lost but listening, saved and now telling others or trusting and obeying Jesus as Lord as well as Savior?