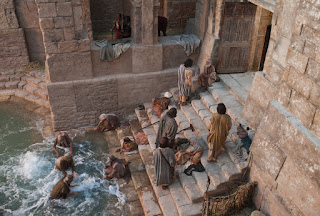 If the feast, mentioned in verse 1, is the Passover then this marks the second year of Jesus ministry.

Jesus and the Lame Man at the Pool of Bethesda

Vs. 4 Does the pool of Bethesda story sound like a way God would heal?
No. God never uses a contest.  John records the belief of the people but does not say it is true.

Vs. 10  Jesus heals the impotent man and tells him to take up his bed (pallet) and walk.  Why would Jesus do this on the Sabbath day?
First because there was a need.  Second to force the issue of His being Lord and Messiah before the ruling Jews.

Vs. 14  Later Jesus finds him in the temple and warns him against future sin, “lest a worse thing come upon thee.”  Why do you think Jesus gave such a warning?
The man’s condition may have been caused by his sin.

Vs. 15  The man goes and tells the Jews that it was Jesus who healed him.  Do you think this man was a believer, a disciple?
No.  His actions indicate he sought to bring Jesus under the condemnation of the ruling Jews.

What does the reaction of the Jews, determining to slay Jesus, tell you about what they really believed in?
They believed only in the laws which they had created.  The law and the position it gave them was more important than the truth of who Jesus really was.

In vs. 17 Jesus gives as his reason for healing, “My Father worked hitherto, and I work.”  Why would this phrase be equivalent to making Himself equal with God?
Jesus called God “My Father” not our Father or your Father. He was saying God was his Father personally not nationally or by heritage as Jewish people

Vs. 19-21 What was the purpose of the signs that Jesus did?
They proved He was doing what His Father was doing and placed all under judgment of the Son.

Vs. 21 What would be the greater works that they would marvel?
Resurrection of the dead.

Vs. 22-23 What is the point, the crux of the judgment?
That all should honor the Son just as they would the Father.

Vs. 24-26  Jesus says belief in His Words and the Father will result in what?
The possession of eternal life, no condemnation and the passing from death unto life.

Vs. 27-29 Why has authority been given to Jesus?
Because He is the son of man.  He became a man in order to save all men.

How will this authority be exhibited?
Jesus will call all the dead from the graves.

Vs. 31-47 Knowing the OT law, Jesus calls on witnesses of who He is. What or who are the witnesses of Jesus as Messiah and Lord?
John the Baptist, the miracles, God the Father and the Scriptures.

According to verse 40 what must the Jews do before they can be saved?
They must come to Jesus.

In vs. 41-44 Jesus describes what is wrong with the Jews.  What is the reason they will not come to Jesus?
They don’t have the love of God in them.  They cannot accept Jesus because he acts under authority of God.  He is not acting as they think a ruler and leader should act they refuse Him.

Today we still have witnesses of who Jesus is and what Jesus can do. Though sign miracles are not a part of this time, between Jesus’ comings, but we stand in the place of John the Baptist as forerunners telling others that Christ is coming and to repent. The scriptures speak even louder today than they did in Jesus time because they are now complete and tell His full story and the final witness is God the Holy Spirit convicting and convincing us that God’s Word is true and that we are sinners needing a Savior.

Can we be as foolish as the Pharisees who saw the evidence right before their eyes but refused to believe the truth and refused to come to Jesus for salvation?