The Gospel of John: That ye Might Believe Lesson 1 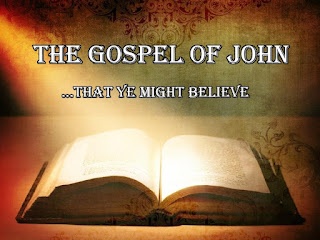 Who were John’s parents?  John 21:2; Matthew 27:56; Mark 15:10 and John 19:25
Zebedee and Salome
Who was John’s brother?
James
Who was his business partner?
Simon Peter
Was Jesus related to John?
Yes Mary (Jesus’ mother) and Salome were sisters.  Jesus and John were first cousins.
What other books did John write?
1st, 2nd and 3rd John and Revelation.

John’s Gospel was the last.  It was written toward the end of the century around 85AD.  The epistles were written around 90AD and the Revelation around 95AD.
Place
Written while John was ministering and living in Ephesus.
Purpose
Read John 20:30-31.  What was John’s purpose in writing?
To win unbelievers and confirm believers in their faith.

Survey of Jesus Deity in John

What is the origin of the word “Word?”
It comes from the Gk. word, “logos” and means a word, uttered by a living voice, embodies a conception or idea

Why did John call Jesus “Logos?”
Jesus was God’s living voice speaking and revealing God to us.

Who is the “man sent from God whose name was John?”
John the Baptist

What was John’ purpose?
To be a witness for the Messiah, for the Light

Who are “his own” that received him not?
The Jewish people, the Israelites

Vs. 12-13 is John the apostle’s witness of Jesus.  What does he tell us about his experience with Jesus?
John received Jesus and John become a son of God.

What does received Jesus mean?
He believed on him as the Logos and as the Savior.

How does verse 14 reveal who John is talking about when he says the “Word?”
Jesus became a man and lived with the disciples on earth.

What does “grace for grace” mean?
Grace after grace, blessing after blessing given to us from God through Jesus Christ.

John says no man hath seen God at any time, who did Abraham, Isaac, Jacob, Moses, etc.  see then in the OT?
They saw God the Son whose role it has always been to act as go-between from God to man.  Compare John 8:58 with Exodus 3:14

John the Baptist’s Work
Who were the men that the priests and Levites asked John about?
The Christ: the messiah, the anointed of God
Elias: NT spelling of Elijah.  He was to be the forerunner of the Messiah.  See Malachi 4:5
That Prophet: foretold by Moses he would come after Moses to lead the Israelites. See Deuteronomy 18:15.  Most believe this would be the Messiah some another forerunner.

Why did John deny being Elijah if he was the really forerunner?
The people looked for a resurrected Elijah. John came in the spirit of Elijah.

What did John’s answer about baptism reveal about his role in the first coming of Christ?
His role was one of preparing for a much greater person, Christ.

Why did John call Jesus the “Lamb of God that taketh away the sin of the world?”
A lamb was sacrificed on the Day of Atonement to seek God’s forgiveness for sin.  Jesus would be the true lamb that would completely take away sin.

What was the sign by which John would know Jesus was the Messiah?
The Spirit (dove) descending on Him.

How could John not know Jesus here and yet in Matthew 3 recognize Him and try to refuse to baptize Him?
John knew him from the womb and probably by his mother how his life would be entwined with Jesus’ but he could not really know him as Messiah until the sign from God was given.

John the Baptist gave some of his disciples to Jesus.  Who were the first disciples of Jesus?
Andrew and John the apostle.  Andrew then goes and gets Peter.  Then Jesus calls Phillip who appears to be a friend of Peter and Andrew.

Why was Nathanael so convinced when Jesus said, “I saw you under the fig tree.”
Nathanael was probably praying, possibly for the Messiah to come.  This meant that Jesus had heard his prayer and seen him praying only God could have done this.

Jesus was God’s Word, God’s own Son come to the earth in human flesh. He was and is very God of very God, omnipotent, omnipresent and omniscient.
Yet when He came to earth to redeem mankind and start His church and tell the world the good news, He chose simply, ordinary, unimportant people to carry out the task.
Just like us.
Posted by D. Kris Minefee at 6:29 AM No comments: