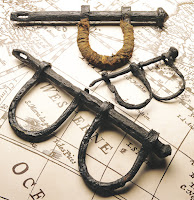 Text: Philemon 1 ¶ Paul, a prisoner of Jesus Christ, and Timothy our brother, unto Philemon our dearly beloved, and fellowlabourer, 2  And to our beloved Apphia, and Archippus our fellowsoldier, and to the church in thy house: 3  Grace to you, and peace, from God our Father and the Lord Jesus Christ. 4  I thank my God, making mention of thee always in my prayers, 5  Hearing of thy love and faith, which thou hast toward the Lord Jesus, and toward all saints; 6  That the communication of thy faith may become effectual by the acknowledging of every good thing which is in you in Christ Jesus. 7  For we have great joy and consolation in thy love, because the bowels of the saints are refreshed by thee, brother. 8 ¶ Wherefore, though I might be much bold in Christ to enjoin thee that which is convenient, 9  Yet for love’s sake I rather beseech thee, being such an one as Paul the aged, and now also a prisoner of Jesus Christ. 10  I beseech thee for my son Onesimus, whom I have begotten in my bonds: 11  Which in time past was to thee unprofitable, but now profitable to thee and to me: 12  Whom I have sent again: thou therefore receive him, that is, mine own bowels: 13  Whom I would have retained with me, that in thy stead he might have ministered unto me in the bonds of the gospel: 14  But without thy mind would I do nothing; that thy benefit should not be as it were of necessity, but willingly. 15  For perhaps he therefore departed for a season, that thou shouldest receive him for ever; 16  Not now as a servant, but above a servant, a brother beloved, specially to me, but how much more unto thee, both in the flesh, and in the Lord? 17  If thou count me therefore a partner, receive him as myself. 18  If he hath wronged thee, or oweth thee ought, put that on mine account; 19  I Paul have written it with mine own hand, I will repay it: albeit I do not say to thee how thou owest unto me even thine own self besides. 20  Yea, brother, let me have joy of thee in the Lord: refresh my bowels in the Lord. 21  Having confidence in thy obedience I wrote unto thee, knowing that thou wilt also do more than I say. 22  But withal prepare me also a lodging: for I trust that through your prayers I shall be given unto you. 23  There salute thee Epaphras, my fellowprisoner in Christ Jesus; 24  Marcus, Aristarchus, Demas, Lucas, my fellowlabourers. 25  The grace of our Lord Jesus Christ be with your spirit. Amen. <<Written from Rome to Philemon, by Onesimus a servant.>> (Philemon 1:1-25 AV)


The book of Philemon is a slice from the life of Paul.  It is not an ordinary epistle or church letter.  It is much more a personal letter that gives us a view of the life of Paul, the church at Colosse and a runaway slave named Onisemus but under the supervision of the Holy Spirit it becomes something much more than just a letter.

Act I: A Letter Arrives

A. The letter arrives in Philemon’s Home
1. It is delivered by Onisemus, a slave of Philemon’s who until this moment had been a runaway, an escapee from his master’s home.
2. A slave walks into Philemon’s presence announcing there is a visitor, Onisemus the runaway slave and thief.  Onisemus walks in.  He is frightened as he should be for if Philemon so chooses he can turn him over to the law and as a runaway slave he would be killed.   He bows at his Master’s feet and holds out to him a rolled parchment, Philemon sees the seal of his friend, the apostle Paul, in surprise he takes the letter and breaks the seal to read it.

B. While Philemon reads the letter, let us look at the characters in this story.

1. Philemon
a) He was a rich man possibly of noble blood or a ruler in the city of Colosse.  He is a slaver owner as many others were in the times of the Roman Empire.  Philemon had met Paul and had become a believer in Jesus Christ.  Now the church met in his home every Sunday.  Paul was a close personal friend for whom Philemon prayed every day.  Many believe that Archippus, was his son and Apphia his wife. Vs. 2

2. Onisemus
a)  A slave, probably captured from Germania, or the British Isles. Taken from his family who were either also slaves somewhere in the Roman empire or more probably killed by the very soldiers who took him and later sold him to the slave traders. He would have been chosen to be a household slave because he showed intelligence and could think. It was that intelligence that allowed Onisemus to escape.  After months perhaps years of planning, he runs away taking with him some of his master’s money or goods.

He runs to Rome a city that, even in 63 AD, had one and a half million people.  With so many, he could hide forever, a fugitive, a criminal with a price on his head and a death penalty as his judgment. Even the best plans of an intelligent man go wrong and Onesimus, afraid, probably broke and hungry begins to look for someone to help him.  He remembers a man who his master Philemon had dearly loved.  A man who had told him of another kind of freedom than the freedom he had ran to find.  A man who he knew was in a Roman prison by the order of the emperor Nero.

3. Paul
a) Paul is under arrest and constantly guarded by a Roman soldier.  He is past 60 now.  His body is marked by scars and riddled with the pain of a life fully given to God.  He is a soldier of the Lord and desperately wanting to go to the One he has served so long. Now he sits in the cell and writes letters, the Prison epistles of Ephesians, Colossians and Philemon, still serving the Lord though in chains.   Into his place of bondage one day walks Onisemus, his friend Philemon’s slave.

Act II: The Letter is Read

A.Philemon reads the letter from Paul delivered by Onisemus. Paul is asking Philemon to forgive his thieving runaway slave.  He says, “I know in the past he may have been useless to you but now he truly lives up to his name Onisemus (useful).

C. Does the Gospel you preach work the same way?
1. Does it use love, as it’s most powerful tool?
2. Does it have the authority to send runaways back to their master God and seek forgiveness?
3. Does it call for sacrifice?  Does it call for the willingness to give up ourselves for the cause of Christ?

D. Paul’s letter to Philemon formed the basis of the Christian view of slavery.
1.  Ultimately, without Paul ever having ordered anything to Philemon or anyone else, Onesimus is freed.
2. According to the letters of Ignatius, a disciple of John, Onesimus was freed, went back to serve Paul in Rome and later pastored the church at Ephesus.
3. Philemon understood as Paul had meant him to, that you can’t put a brother in Christ in chains.
4. This same understanding led finally to the abolishment of all slavery in all nations who came under Christian dominance.  This was done not by force of commandment but by the power of the gospel.

A. Did you wonder why the Holy Spirit put such a personal letter in the Bible?  Because the role of Paul, Onesimus and Philemon are representative of more than just themselves. Paul stand as Mediator, the go-between for Onisemus and Philemon.  Just as Christ stands as the mediator between Us and God. Onisemus stands as the criminal, the runaway, just as we stand before God as sinners and runaways from His rule over us. Philemon stands in the role of the Master, the rightful owner of Onisemus, just as God stands as our master and the rightful owner of us.

B. Christ puts our sin on His own account
1. In love, he came to this earth and died in our place. In authority, he defeated sin and brings us back to God whom we have wronged and turned away from. In sacrifice, he mediates for us and takes the wrath of his father toward us on his own account.

It is used in 2 Corinthians 5:19-21 To wit, that God was in Christ, reconciling the world unto himself, not imputing their trespasses unto them; and hath committed unto us the word of reconciliation. Now then we are ambassadors for Christ, as though God did beseech [you] by us: we pray [you] in Christ's stead, be ye reconciled to God. For he hath made him to be sin for us, who knew no sin; that we might be made the righteousness of God in him.

5. Christ took the payment or our sin upon Himself and then imputed His righteousness to us. There as he is scourged, there as he is beaten, there as he is spat upon, there as he is crucified, there at Calvary, the son of God, takes the wrath of God the Father, the punishment for our sins on his own account.  God seeing the suffering and death of His Son, and hearing our cry to Him for salvation, marks it paid in full! Jesus put our sin on His own account and paid the price with His own life’s blood.

In Paul’s words, we hear the heart of Christ pleading for us before His Father.
“ If he hath wronged thee…,put that on mine account; I, Jesus, have written it in mine blood, I will repay…”
Posted by D. Kris Minefee at 9:15 AM