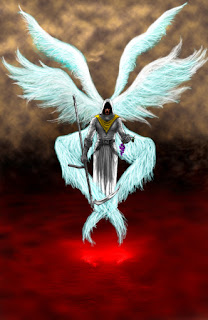 Revelation 14:1  And I looked, and, lo, a Lamb stood on the mount Sion, and with him an hundred forty [and] four thousand, having his Father's name written in their foreheads. 2  And I heard a voice from heaven, as the voice of many waters, and as the voice of a great thunder: and I heard the voice of harpers harping with their harps: 3  And they sung as it were a new song before the throne, and before the four beasts, and the elders: and no man could learn that song but the hundred and forty and four thousand, which were redeemed from the earth. 4  These are they which were not defiled with women; for they are virgins. These are they which follow the Lamb whithersoever he goeth. These were redeemed from among men, being the firstfruits unto God and to the Lamb. 5  And in their mouth was found no guile: for they are without fault before the throne of God.

Where are they now?
Standing with the Lamb on earth on Mt. Zion.

Why is this vision seen now?
It looks forward to the end of the tribulation and the beginning of the Millennium.  The 144,000 have passed through the Tribulation under God’s protection and now stand as the first to enter the 1000 year reign of Christ.

Revelation 14: 6  And I saw another angel fly in the midst of heaven, having the everlasting gospel to preach unto them that dwell on the earth, and to every nation, and kindred, and tongue, and people, 7  Saying with a loud voice, Fear God, and give glory to him; for the hour of his judgment is come: and worship him that made heaven, and earth, and the sea, and the fountains of waters. 8  And there followed another angel, saying, Babylon is fallen, is fallen, that great city, because she made all nations drink of the wine of the wrath of her fornication. 9  And the third angel followed them, saying with a loud voice, If any man worship the beast and his image, and receive [his] mark in his forehead, or in his hand, 10  The same shall drink of the wine of the wrath of God, which is poured out without mixture into the cup of his indignation; and he shall be tormented with fire and brimstone in the presence of the holy angels, and in the presence of the Lamb: 11  And the smoke of their torment ascendeth up for ever and ever: and they have no rest day nor night, who worship the beast and his image, and whosoever receiveth the mark of his name. 12  Here is the patience of the saints: here [are] they that keep the commandments of God, and the faith of Jesus. 13  And I heard a voice from heaven saying unto me, Write, Blessed [are] the dead which die in the Lord from henceforth: Yea, saith the Spirit, that they may rest from their labours; and their works do follow them.

What is the time setting of this vision?  What does it immediately proceed?
Just before the final judgment of the Seven Bowls.

Why are the angels now preaching the gospel and giving warning?
There may be no longer a witness for the Lord upon the earth and it will prove God’s absolute justice in sending one last warning to man to repent.

The Harvesting Angels and the Winepress of God’s Wrath

How many reapings are there?  Two

Is the one on the cloud and angel or Jesus?
If Jesus, he is describe as like unto the Son of Man; on his head is a golden crown; and he sits on a white cloud.
If an angel: he takes orders from another angel; the other angel of vs. 15 has no precedent; the definite article “the” is not in the Greek for “Son of man”; there are only six angels not seven in this section.
The simplest interpretation would seem to be that this is Jesus and that he acts as one of the seven.

Assemble yourselves, and come, all ye heathen, and gather yourselves together round about: thither cause thy mighty ones to come down, O LORD. Let the heathen be wakened, and come up to the valley of Jehoshaphat: for there will I sit to judge all the heathen round about. Put ye in the sickle, for the harvest is ripe: come, get you down; for the press is full, the fats overflow; for their wickedness is great.   Multitudes, multitudes in the valley of decision: for the day of the LORD is near in the valley of decision. The sun and the moon shall be darkened, and the stars shall withdraw their shining. The LORD also shall roar out of Zion, and utter his voice from Jerusalem; and the heavens and the earth shall shake: but the LORD will be the hope of his people, and the strength of the children of Israel. So shall ye know that I am the LORD your God dwelling in Zion, my holy mountain: then shall Jerusalem be holy, and there shall no strangers pass through her any more.

Depending on your answer to the previous question, why do you think there are two reapings?
If Jesus: the first reaping is the final death of the saints just before the battle of Armageddon.
If an angel: it is the harvest of both unrepentant man and perhaps the power or “vine” behind that power.

How great does John say the slaughter will be?
1600 hundred furlongs, in the Greek is 1600 stadia equivalent to 200 miles of blood 4 feet deep.  This is the length of Palestine.

Even at the very end of the earth’s time and man’s continued unrepentance God still sends an angel through the heavens with a Gospel message to earth to repent and believe.
How much should we then in the midst of the evil around us continue to preach the Gospel despite the evil we see growing around us. God’s ultimate purpose is to save not condemn and only when man completely refuses does He send judgment and wrath. Let us follow His example and only let the grave keep us from reaching out to those who need the “Good News.”
Posted by D. Kris Minefee at 7:25 AM