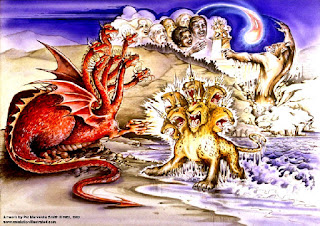 1  And I stood upon the sand of the sea, and saw a beast rise up out of the sea, having seven heads and ten horns, and upon his horns ten crowns, and upon his heads the name of blasphemy.  2  And the beast which I saw was like unto a leopard, and his feet were as the feet of a bear, and his mouth as the mouth of a lion: and the dragon gave him his power, and his seat, and great authority.  3  And I saw one of his heads as it were wounded to death; and his deadly wound was healed: and all the world wondered after the beast.  4  And they worshipped the dragon which gave power unto the beast: and they worshipped the beast, saying, Who is like unto the beast? who is able to make war with him?  5  And there was given unto him a mouth speaking great things and blasphemies; and power was given unto him to continue forty and two months.  6  And he opened his mouth in blasphemy against God, to blaspheme his name, and his tabernacle, and them that dwell in heaven.  7  And it was given unto him to make war with the saints, and to overcome them: and power was given him over all kindreds, and tongues, and nations.  8  And all that dwell upon the earth shall worship him, whose names are not written in the book of life of the Lamb slain from the foundation of the world.  9  If any man have an ear, let him hear.  10  He that leadeth into captivity shall go into captivity: he that killeth with the sword must be killed with the sword. Here is the patience and the faith of the saints.
The Greek word for beast here is not the same as Rev 4 & 5.  Here it is the Grk word therion, which means "wild beast or animal."  In chp 4  the word was zoon which meant "living creature or created one".

What does the sea represent?
Humanity or the nations

What are the ten crowns?
The ten kings which rule during the revived Roman Empire one of which is the Anti-Christ.

What does this beast do?
Blasphemes God and persecutes the saints.

What event brings this beast to domination of the world?
His apparent resurrection.

Is this death and resurrection of a person or of a kingdom?
Revelation 11:7 and 17:8 say that the beast ascends out of the bottomless pit.  The bottomless pit is a synonym for hell.  Only persons or demons inhabit it not governments or kingdoms.  Furthermore, the beast is said to be taken and thrown alive into the lake of fire at the end of the battle of Armageddon.  Only a person could be so judged.

What is God's promise to his saints and warning to the worshippers of the beast?
The beast will be punished and die in like manner as he lived.

The Antichrist In Scriptural
Revelation 13:1 Beast with 7 heads
Beast having 7 heads and 10 horn and 10 crowns.

Daniel 7:8 The Little Horn
I considered the horns, and, behold, there came up among them another little horn, before whom there were three of the first horns plucked up by the roots: and, behold, in this horn were eyes like the eyes of man, and a mouth speaking great things.

Daniel 11:36-39 The Willful King
36  And the king shall do according to his will; and he shall exalt himself, and magnify himself above every god, and shall speak marvellous things against the God of gods, and shall prosper till the indignation be accomplished: for that that is determined shall be done. 37  Neither shall he regard the God of his fathers, nor the desire of women, nor regard any god: for he shall magnify himself above all. 38  But in his estate shall he honour the God of forces: and a god whom his fathers knew not shall he honour with gold, and silver, and with precious stones, and pleasant things. 39  Thus shall he do in the most strong holds with a strange god, whom he shall acknowledge and increase with glory: and he shall cause them to rule over many, and shall divide the land for gain.

2 Thess 2:3-4 Man of Sin, Son of Perdition
3 Let no man deceive you by any means: for that day shall not come, except there come a falling away first, and that man of sin be revealed, the son of perdition; 4  Who opposeth and exalteth himself above all that is called God, or that is worshipped; so that he as God sitteth in the temple of God, shewing himself that he is God.

The Second Beast 11-18
11  And I beheld another beast coming up out of the earth; and he had two horns like a lamb, and he spake as a dragon.  12  And he exerciseth all the power of the first beast before him, and causeth the earth and them which dwell therein to worship the first beast, whose deadly wound was healed.  13  And he doeth great wonders, so that he maketh fire come down from heaven on the earth in the sight of men,  14  And deceiveth them that dwell on the earth by the means of those miracles which he had power to do in the sight of the beast; saying to them that dwell on the earth, that they should make an image to the beast, which had the wound by a sword, and did live.  15  And he had power to give life unto the image of the beast, that the image of the beast should both speak, and cause that as many as would not worship the image of the beast should be killed.  16  And he causeth all, both small and great, rich and poor, free and bond, to receive a mark in their right hand, or in their foreheads:  17  And that no man might buy or sell, save he that had the mark, or the name of the beast, or the number of his name.  18  Here is wisdom. Let him that hath understanding count the number of the beast: for it is the number of a man; and his number is Six hundred threescore and six.
Read the following passages to help identify the second beast.  Rev. 16:13, 19:20, 20:10

Who is the second beast?
The false prophet who together with the Anti-christ and Satan form a counterfeit trinity.

What is the role of the false prophet?
To cause the world to worship the Anti-Christ.

How does he accomplish this?
Miracles, lying wonders , an image of the 1st beast which appears to come to life and the threat of death to any which do not worship the beast.

If you relate this image with Daniel 9 and Matthew 27 when and where might the image be set up and cause to live?
At the mid-point of the tribulation in the temple at Jerusalem.

What does the number 666 tell us?
If seven is the number of man 666 may show the Anti-christs attempt to approach Godhood.  Since revelation says it is the number of man it may represent the complete man apart from God.  Some have related it to Latin, Roman and Hebrew numbers and have used it then to identify Nero, Hitler and even Jimmy Carter.  The true purpose will be plain during the tribulation.

What will be the actual mark of the beast?
Whatever tech is available at the time, tattoo, RFID tag, bar code, magnetic decal, invisible chip, etc.
The key will be who is issuing it, who has authority over its use, where it will be installed and what will happen if you don’t receive it.

Conclusion
At a time when so much of the world is changing so rapidly it is easy to imagine the events of Revelation taking place at any time.
Technology, communication, social networking, computers have moved us to a society that can erupt in chaos at any time.
Such an eruption will one day result in the Beast arising from the ashes of fallen kingdoms to rule the world.

What do we do? Paul dealt with this same question in 2Thess 2:13-16
But we are bound to give thanks alway to God for you, brethren beloved of the Lord, because God hath from the beginning chosen you to salvation through sanctification of the Spirit and belief of the truth: Whereunto he called you by our gospel, to the obtaining of the glory of our Lord Jesus Christ. Therefore, brethren, stand fast, and hold the traditions which ye have been taught, whether by word, or our epistle. Now our Lord Jesus Christ himself, and God, even our Father, which hath loved us, and hath given us everlasting consolation and good hope through grace, Comfort your hearts, and stablish you in every good word and work.
Posted by D. Kris Minefee at 6:22 AM