The Gospel of John Chapter 6 Feeding Body and Soul 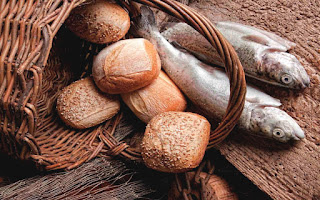 Vs. 1-4  How much time has passes since chapter 5?
Almost a year has passed.  The feast of the Jews was mentioned in chapter 5 and now in chapter 6 is drawing near again.

What was the purpose of Jesus asking Phillip where they would buy bread?
Jesus was testing Phillip and the other disciples as well.

What was the desired outcome of this kind of test?
That the apostle’s faith in Jesus would be strengthened.

When God tests us today, what is His purpose?
God tests us to make us better, stronger, more faithful. The word is used in the same way as purifying a precious metal. The testing makes the metal more pure, more valuable.

Vs. 8 Andrew finds a lad with 5 loaves and two fishes.  Where do you think this lad come from?
He may have been traveling with the pilgrims for the Passover.  He could have been a helper in Peter and Andrew’s fishing boat who would have kept up with their own provisions.

Vs. 11 Are there other times when we see Jesus saying the blessing before eating?  What is significant about Jesus blessing the loaves and fishes before eating them?
Yes, Luke 24:30 with the two disciples on the Emmaus Road.  Jesus giving the blessing is a strong object lesson, if Jesus gave thanks for the food, how much more should we.
The traditional Jewish blessing for food was, “Blessed art thou, Jehovah our God, King of the world, Who causes to come forth bread from the earth.”

Vs 12-13. What was the purpose of gathering up the leftovers in twelve baskets?
By gathering up the fragments the apostles would truly and personally see the power of God.  Each one of them would carry their own lesson in the sufficiency of God.

Application of the Loaves and the Lad

Following Jesus example what can I learn about turning a problem into an opportunity?
Step 1.  Is there a genuine need that can be an opportunity for God to work? (When Jesus then lifted up his eyes, and saw a great company come unto him,)
Step 2.  Share the need with others. (he saith unto Philip, Whence shall we buy bread)
Step 3.  Is this a test from God? (this he said to prove him)
Step 4.  What are our resources? (There is a lad here, which hath five barley loaves, and two small fishes)
Step 5.  Use what you have and trust God to make it sufficient. (Jesus took the loaves; and … he distributed to the disciples, and the disciples to them that were set down; and likewise of the fishes)
Step 6.  Pray for God’s blessing and give Him the glory. (and when he had given thanks)
Step 7.  Look for the lesson God wants you to learn from this crisis/ opportunity.  (Gather up the fragments that remain, that nothing be lost. Then those men, when they had seen the miracle that Jesus did, said, This is of a truth that prophet that should come into the world.)

Read the parallel passage in Mark 6:45-50
There are three miracles in this passage what are they?
1. Jesus knows his disciples are in trouble in the sea.
2. Jesus walks on the water to the disciples.
3. The ship is immediately at land once Jesus enters the ship.

What does this passage tell me about trying to do what God’s will despite opposition.
God will be with us to provide what is needed to accomplish that which He has sent us to do.  We must not give up but keep rowing.

The next day the crowd which had been fed and had tried to make Jesus king found Him again and ask how He got there.  What was Jesus answer to the question and what did it reveal about Him and these people?
Jesus tells them they are seeking Him just to provide more food.  They are looking for physical comfort and ease.
His answer reveals He knows their hearts and will not be their king on their terms.  They must accept Him on His terms.

Jesus then tells the crowd to labor for food that is everlasting. They ask Him what to do to work the works of God. What is Jesus answer?
They must believe on him (Jesus) whom he (God) hath sent.

What does this answer reveal about salvation and about serving God after we are saved?
Salvation is not our work it is God’s through His Son Jesus Christ.  All we can do is believe in His work on the cross and accept what He has done on our behalf.  This does not change after salvation we must still believe in Him.

Vs. 30-34 The people then ask for a sign from Jesus.  Why do you think they asked about manna?
They were probably hungry again as Jesus had said and because Moses had given a prophecy about a prophet who would follow him as the leader of Israel.  Vs. 14.

How is this same problem with us today?
People cannot accept the supernatural.  They will not believe in a Creator.  They do not believe anything they cannot see, hear or touch. They follow Jesus for a miracle, a better life, or physical needs rather than spiritual salvation.

Vs. 35-40  Jesus declares Himself as much more than just a miracle worker.  What does Jesus say he is?
The bread of life

According to Jesus what is the will of the Father?
That everyone that sees the Son and believes on him may have everlasting life and Jesus will raise him from the dead.

Vs. 41-51 What hurdle are the Jews stumbling over?
How can Jesus say He came down from heaven when they knew his father and mother.

What does Jesus say their problem is?
They cannot come to Him, cannot believe who He really is until God the Father draws them.

When does Jesus say this draw takes place?
When they are taught of God. Every man that has heard and learned of the Father comes to Christ as well.

When Jesus says in vs. 51 that a man must eat of this bread, His flesh which he will give for the life of the world, what is he talking about?
He is speaking of His death on the cross and our partaking of that death by believing in Him as our substitute.

Vs 52-59  The Jews move from murmuring to outright shock.  What do they think Jesus is telling them to do?
To become cannibals and literally eat his body.

Does Jesus try to fix their misconception?
No, He seems to make it worse.

Vs 60-71 Many of his disciples (not the apostles) are also upset at this hard teaching.  Jesus tries to explain to them what he is saying.  What does Jesus say to get the truth across to his followers?
That the truth he is teaching is a spiritual one not a physical one.  Vs. 63

Many of the other disciples leave Jesus at this time and Jesus even asks the twelve if they will leave.  What do the words of Peter tell us about his being able to see the spiritual instead of the physical?
He says they cannot go anywhere else for Jesus is the only one who had words of eternal life and that they believe and are sure Jesus is the Messiah and the Son of God.

What does Jesus comment to Peter’s strong statement of faith tell us about His human emotions?
The desertion of the nominal disciples hurt him deeply and that hurt is just the beginning, for one of those closest to Him will betray Him.

John 6 is a chapter for the true followers of Jesus, not just the hanger-ons, or the nominal Christians. It is a chapter that deals with problems, opportunities, blessings, desertions and even broken heartedness. It teaches us that following Jesus will be filled with difficulties but that Jesus will be with us and that if we will allow it, He will not only bring us through but will also bless in ways that could only be experienced in the midst of the difficulties and challenges.