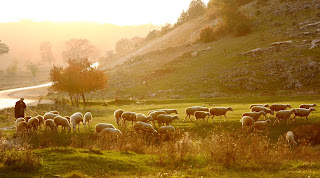 Verily, verily is literally the Hebrew word “Amen” and along with “hallelujah” are almost universally understood.

The word parable here in the Greek is paroimia and would be closer to the idea of an allegory rather than the classic form of a parable.

Interpreting the parable or allegory

What does Jesus say is the difference between the Shepherd and the hireling?
The hireling runs when there is danger, but the shepherd will defend the sheep to the death.

Who are the hirelings, strangers and thieves that Jesus was warning the people about.
Pharisees, Sadducees, false Messiahs

This teaching is in direct confrontation to the leadership of the Pharisees who did not have the best interest of the people as their purpose but they were only hirelings out for profit or worse thieves and robbers taking from those they were supposed to protect.

Are there hirelings, strangers and thieves seeking to destroy the Lord’s flock today?  Who are they?  How are they identified?
There are heretical cults, such as Jehovah Witness, Mormons etc., which are seeking to destroy God’s people. There are pastors who do care for the flock but are only hirelings. Lack of self-sacrifice and the neglect of the flock identify them.

Who were the “other sheep not of this fold that Jesus speaks of in verse 16?
The Gentiles that would be joined to the church Jesus would leave behind and become His sheep and His people.

The Feast of Dedication takes place six months after the Feast of Tabernacles. Six months have passed from verse 21 to verse 22.

What was Jesus’ answer to those seeking a plain declaration of his Messiahship?
He had already answered them but they did not hear him. They would not believe the works that He had done in plain sight.

Why did Jesus say they would not believe Him?
They were not His sheep.

Is this saying that only some could know Jesus?
No, it is saying they must come to Jesus, not Jesus coming to them. They must accept His authority as their shepherd before they could know Him as Messiah.

According to verses 28-29 is it possible, once we have heard His voice and come to Him to become lost sheep again?
No.  The hand of Jesus and the hand of the Father hold us forever.

What did the Jews understand Jesus was saying when He said, “I and my Father are one.”
They knew He was saying that He was God.

What was their reaction to Jesus statement?
The picked up rocks to stone Him and accused Him of blasphemy.

What did Jesus mean by quoting the Old Testament and saying, “Ye are gods?”
Psalms 82:6 I have said, Ye are gods (elohim); and all of you are children of the most High.
If the word of God refers to those judges who served God and received his word as gods, meaning they were acting in God’s place over the people, then how much more would it be true of Jesus who was sent by God and was truly God.

John 10 is a famous discourse of Jesus, it stands alongside Psalms 23. In the 23rd Psalms David writes as a sheep looking up to his shepherd while Jesus in John 10 speaks as the shepherd looking out for His sheep.
It is of vital importance that we understand His challenge to all of us who hear His words. Are we in the flock of the Good Shepherd? Do we hear and know His voice did we come when He called? Have we passed through Him who is our door to the safety and protection of the fold?
He is the our Good Shepherd and the only one who can give eternal life and protection to us, His sheep, because He is truly God with the power to fulfill the promise of true eternal life.
Posted by D. Kris Minefee at 8:57 AM