Prelude to the Bowls 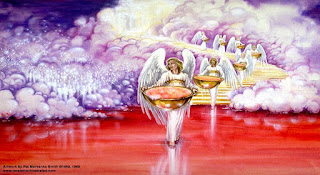 Revelation 15:1-8  And I saw another sign in heaven, great and marvelous, seven angels having the seven last plagues; for in them is filled up the wrath of God. And I saw as it were a sea of glass mingled with fire: and them that had gotten the victory over the beast, and over his image, and over his mark, [and] over the number of his name, stand on the sea of glass, having the harps of God. And they sing the song of Moses the servant of God, and the song of the Lamb, saying, Great and marvelous [are] thy works, Lord God Almighty; just and true are thy ways, thou King of saints. Who shall not fear thee, O Lord, and glorify thy name? for thou only art holy: for all nations shall come and worship before thee; for thy judgments are made manifest.   And after that I looked, and, behold, the temple of the tabernacle of the testimony in heaven was opened: And the seven angels came out of the temple, having the seven plagues, clothed in pure and white linen, and having their breasts girded with golden girdles. And one of the four beasts gave unto the seven angels seven golden vials full of the wrath of God, who liveth for ever and ever. And the temple was filled with smoke from the glory of God, and from his power; and no man was able to enter into the temple, till the seven plagues of the seven angels were fulfilled.

What is the overall object of this passage?
It brings attention back to the One who will pour out His wrath.

What is the sea of glass mingled with fire?  What does it represent?
The sea is a basin, like that which was outside the temple on earth. This one is clear like glass yet somehow also shows fire.  It probably represents the purity of those who stand upon it which have given their life for the testimony of the Lamb.

What song do the victorious saints sing?
The song of Moses the servant of God and the song of the Lamb.

What does this title tell us about the song?
Moses led the people of God to freedom from an oppressive leader, the Lamb gave eternal life through grace and faith. Once again we see the OT and NT called to remembrance in the Revelation.

Several of the last judgments are reminiscent of the 10 plagues of Egypt that Moses declared in Exodus. 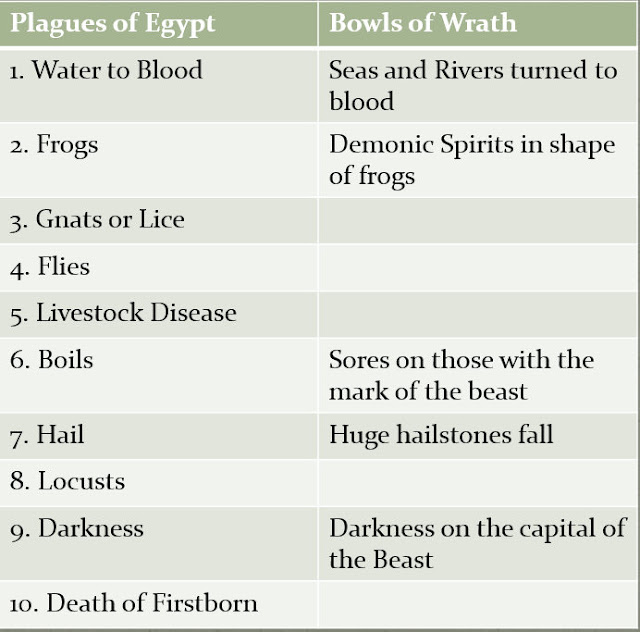 Exactly what portion of the temple in heaven is the “temple of the tabernacle?”
This is the inner sanctuary, the place where God the father dwells.  On earth it was called the holy of holies or the most holy place.

What is significant about  the following scenes:
the opening of the temple-
the angels receiving the bowls from one of the living creatures-
the temple filled with smoke from the glory of God-
All lead us to realize that this is the final judgment to be poured our from heaven.  It comes from the very heart of heaven the throne room of God and it represents the greatest wrath and punishment that has ever been cast upon mankind.

Revelation 16:1  And I heard a great voice out of the temple saying to the seven angels, Go your ways, and pour out the vials of the wrath of God upon the earth.

And the first went, and poured out his vial upon the earth; and there fell a noisome and grievous sore upon the men which had the mark of the beast, and upon them which worshipped his image.

And the second angel poured out his vial upon the sea; and it became as the blood of a dead man: and every living soul died in the sea.

And the third angel poured out his vial upon the rivers and fountains of waters; and they became blood. And I heard the angel of the waters say, Thou art righteous, O Lord, which art, and wast, and shalt be, because thou hast judged thus. For they have shed the blood of saints and prophets, and thou hast given them blood to drink; for they are worthy. And I heard another out of the altar say, Even so, Lord God Almighty, true and righteous are thy judgments.

And the fourth angel poured out his vial upon the sun; and power was given unto him to scorch men with fire. And men were scorched with great heat, and blasphemed the name of God, which hath power over these plagues: and they repented not to give him glory.

And the fifth angel poured out his vial upon the seat of the beast; and his kingdom was full of darkness; and they gnawed their tongues for pain, And blasphemed the God of heaven because of their pains and their sores, and repented not of their deeds.

And the sixth angel poured out his vial upon the great river Euphrates; and the water thereof was dried up, that the way of the kings of the east might be prepared. And I saw three unclean spirits like frogs come out of the mouth of the dragon, and out of the mouth of the beast, and out of the mouth of the false prophet. For they are the spirits of devils, working miracles, [which] go forth unto the kings of the earth and of the whole world, to gather them to the battle of that great day of God Almighty. Behold, I come as a thief. Blessed is he that watcheth, and keepeth his garments, lest he walk naked, and they see his shame. And he gathered them together into a place called in the Hebrew tongue Armageddon.

And the seventh angel poured out his vial into the air; and there came a great voice out of the temple of heaven, from the throne, saying, It is done. And there were voices, and thunders, and lightnings; and there was a great earthquake, such as was not since men were upon the earth, so mighty an earthquake, and so great. And the great city was divided into three parts, and the cities of the nations fell: and great Babylon came in remembrance before God, to give unto her the cup of the wine of the fierceness of his wrath. And every island fled away, and the mountains were not found. And there fell upon men a great hail out of heaven, every stone about the weight of a talent: and men blasphemed God because of the plague of the hail; for the plague thereof was exceeding great. 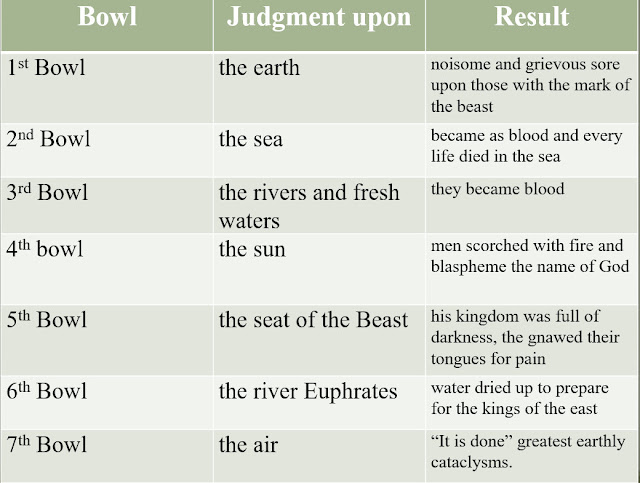 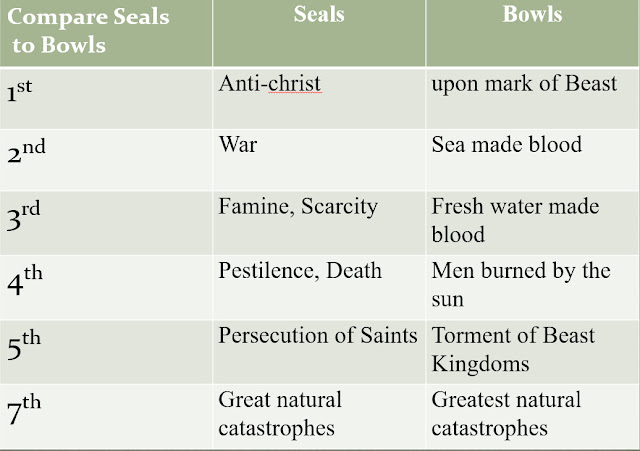 What does this comparison reveal?
First, the perfect balance, judgment of God.  Second, the greater severity and narrowing of the judgments show they follow the seals and the trumpets not run consecutively with them.

What final event begun by the Bowls is still to happen before the end of the final week of Daniel?
The Battle of Armageddon, the great and terrible Day of the Lord.

The 7 judgments of Revelation 15 and 16 mark the end of God’s mercy for the inhabitants of earth who worship the Beast. There will be no more calls of “Repent” no more Angels flying through the heavens nor witnesses upon the earth preaching the Gospel. Now only wrath is left.


We must keep in mind that for every member of mankind there will come a time when mercy and grace will end and all that we can look forward to is the wrath of God who we spurned, ridiculed and ignored. Don’t wait until it is too late to hear the Good News and repent.

Romans 2:3-5: And thinkest thou this, O man, that judgest them which do such things, and doest the same, that thou shalt escape the judgment of God? Or despisest thou the riches of his goodness and forbearance and longsuffering; not knowing that the goodness of God leadeth thee to repentance? But after thy hardness and impenitent heart treasurest up unto thyself wrath against the day of wrath and revelation of the righteous judgment of God.