Five Reasons Baptism Must Be By Immersion

Five Reasons Baptism Must Be By Immersion 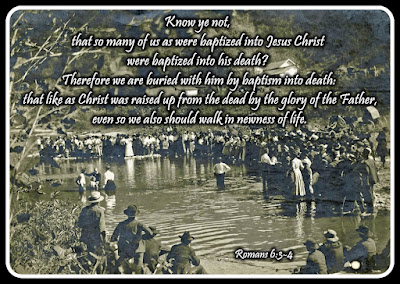 Matthew 28:18-20 And Jesus came and spake unto them, saying, All power is given unto me in heaven and in earth. Go ye therefore, and teach (make disciples) all nations, baptizing them in the name of the Father, and of the Son, and of the Holy Ghost:  Teaching them to observe all things whatsoever I have commanded you: and, lo, I am with you alway, even unto the end of the world. Amen.

There are three commands given in the Great Commission, the marching orders of the church, make disciple, baptize those disciple and then train those disciples. Just three commands that encompasses all the mission of the church that Jesus built and sent out into the world. With only three commands it is imperative that we understand each one without error. To ignore or change one, would effect the churches work in the other two. This is one of the reasons that we as Baptist take baptism very seriously. It is a vital part or what a church is commissioned by Jesus to do.

To gain a better understanding of baptism, I want to give you five reasons why baptism must be by immersion. If it is not then it is not baptism and we have lost one third of the church's mission.

Reason 1. Definition of the Word, Baptism

Our work baptize is not a translation but a transliteration. The word was simply taken directly from the orignal language and adopted into English. This may have been done because the word itself was specialized to its practice in the church. It could also have been because no English word quite fit the practice or meaing of the original word.

Baptize comes from the Greek word: βαπτίζω. It is translated in the KJV; baptize (76), wash 2, baptist 1. It comes from a derivative of the word bapto; which means to make whelmed (i.e. fully wet) - Strong's Greek & Hebrew Dictionary.

Vine Word Studies states that "baptizo was necessarily transliterated into English, as there was no equivalent in our language. “To immerse” would be simply “to plunge into.” To baptize is to put into water and take out again. It involves immersion, submersion, and emergence—death, burial and resurrection. The word was used among the heathen Greeks of articles which underwent submersion and emergence, as in the case of the dyeing of a garment. (Vine, W. Collected writings of W. E. Vine. Nashville: Thomas Nelson)

Though baptism is a common occurrence in the New Testament, it is not usually described in detail. This is because it was a common practice and because the word was clearly understood by the original hearers and readers. When they read or heard baptize, they knew it meant to immerse or dip, the word simply had no other meaning.

Matthew 3:16 And Jesus, when he was baptized, went up straightway out of the water: and, lo, the heavens were opened unto him, and he saw the Spirit of God descending like a dove, and lighting upon him:

Mark 1:9-11 - And it came to pass in those days, that Jesus came from Nazareth of Galilee, and was baptized of John in Jordan.  And straightway coming up out of the water, he saw the heavens opened, and the Spirit like a dove descending upon him:  And there came a voice from heaven, saying, Thou art my beloved Son, in whom I am well pleased.

Acts 8:36-39 And as they went on their way, they came unto a certain water: and the eunuch said, See, here is water; what doth hinder me to be baptized?  And Philip said, If thou believest with all thine heart, thou mayest. And he answered and said, I believe that Jesus Christ is the Son of God.  And he commanded the chariot to stand still: and they went down both into the water, both Philip and the eunuch; and he baptized him.  And when they were come up out of the water, the Spirit of the Lord caught away Philip, that the eunuch saw him no more: and he went on his way rejoicing.

Once again the only way you can picture these verses is to see a complete immersion in much water. The eunuch says, “See here is much water.” The both Phillip and the Eunuch go down into the water. Finally, they come up out of the water. This can only be baptism by immersion, any other kind action other than immersion is forced and obviously biased against the plain writing of scripture.

For the first thirteen hundred years all Christendom held this belief. – B. H. Carroll

The Christian church knew no form of baptism but immersion until the Middle Ages, when the practice of sprinkling or pouring was introduced by the Roman Catholic church-which itself had previously always baptized by immersion. The great Catholic theologian Thomas Aquinas (1225–1274) said, “In immersion the setting forth of the burial of Christ is more plainly expressed, in which this manner of baptizing is more commendable.” The Catholic church did not recognize other modes until the Council of Ravenna, held in France in 1311. It was from the Catholic church that Lutheran and Reformed churches inherited the form of sprinkling or pouring. The Church of England did not begin the practice of sprinkling until 1645. The Eastern Orthodox church has never permitted any mode but immersion. (John MacArthur, J: Matthew 1-7 Chicago: Moody Press)

Some would like to claim exceptions to baptism by immersion, but the exceptions simply prove the rule.

Though some form of immersion was likely the most common method of baptism in the early church, many of the writings from the ancient church appeared to view this mode of baptism as inconsequential. The Didache 7.1–3 (AD 60–150) allowed for affusion practices in situations where immersion was not practical. Likewise, Tertullian (AD 196–212) allowed for varying approaches to baptism even if those practices did not conform to biblical or traditional mandates (cf. De corona militis 3; De baptismo 17). Finally, Cyprian (ca. AD 256) explicitly stated that the amount of water was inconsequential and defended immersion, affusion, and aspersion practices (Epistle 75.12).

These were all written hundreds of years later and in every case were provided as exception to the traditional practice of immersion. Immersion remained the standard mode of baptism even for the Catholic church until the 13 or 1400’s. The children of Catholicism, Lutherns, Presbyterians, Methodists, Anglican, Episcopalian, etc. took their practice of disregarding the true scriptural mode of baptism from the Catholic church.

It is telling that even thought the Greek Orthodox church practices infant baptism, which is completely unbiblical, it still dips the babies in the water. After all they still speak Greek and the word baptize means to immerse or dip.

Reason 4. Symbolism of the Ordinance

Romans 6:3-4 Know ye not, that so many of us as were baptized into Jesus Christ were baptized into his death? Therefore we are buried with him by baptism into death: that like as Christ was raised up from the dead by the glory of the Father, even so we also should walk in newness of life.

In order for baptism to mean anything as a symbol for the death, burial and resurrection of Jesus, a picture of the Gospel, it must be by immersion. Sprinkling and pouring can in no way portray what Jesus did for us and what we are proclaiming as our faith in Him as our savior. Changing the mode renders baptism meaningless and empty.To change the mode of baptism, claim that it is not important is to also say that the Gospel is not important or that faith in Jesus Christ is unimportant.

When we dismiss or disregard immersion as the mode of baptism in a very real way we are also dismissing our salvation through the Gospel of Jesus Christ. Peter in the passage above says that the like figure (symbol) of baptism saves us. To make sure he is not misunderstood he then adds, “not the putting away of the filth of the flesh but the answer of a good conscience toward God.” In other words baptism doesn’t wash away sins but it is our response toward God as the result of our guilt being removed. Then he says how the figure of baptism saves us “by the resurrection of Jesus Christ.” Biblical baptism when the saved person is immersed and then taken back up from under the water, shows salvation by the resurrection of Jesus Christ.

If you change the symbol then you also have changed the Gospel. This is exactly what we see has happened in denominations that have disregarded true baptism. No longer is baptism a symbol or picture of the Gospel, but it now becomes a means of salvation itself. Now you cannot wait until there is much water because the water poured on your head somehow confers salvation. Even worse is the foolish baptism of babies. Infants cannot understand the Gospel and are innocent in God’s eyes until they come of age, but if you believe that Baptism is necessary for salvation then you must baptize them as soon as you can. Now the Gospel is meaningless, the life, death and resurrection of Jesus as proof of his sinlessness and power over death has been utterly lost. And those who now put their faith in a rite are also lost, perhaps to the point of never seeing the Gospel because they do not see their need for a salvation they have been told was conferred upon them as infants.