Five Biblical Proofs of the Trinity, Definitions and Confession of Faith.

Five Biblical Proofs of the Trinity 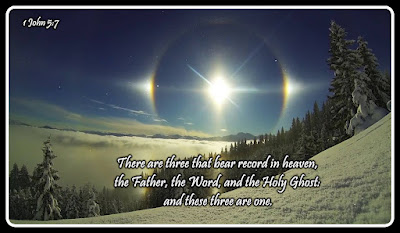 1. The Trinity is Seen and Alluded to Many Times In the Bible

Though the doctrine of the Trinity is not as clearly seen in the Old Testament as it is in the New, nevertheless it is still there.

It is alluded to in the plural word for God (Elohim) used throughout Genesis 1 and 2 “Let us make man…” Gen 1:26. Every use of God is plural as is also true in much of the rest of the Old Testament uses of the word for God.

It is clearly seen in as Isaiah speaks with the voice of the coming Messiah,  Isaiah 48:16  Come ye near unto me, hear ye this; I have not spoken in secret from the beginning; from the time that it was, there am I: and now the Lord GOD, and his Spirit, hath sent me.

The Trinity is clearly and easily seen both doctrinally and literally in the New Testament.

At the baptism of Jesus, the Spirit descended on him and a voice from God out of heaven identified Jesus as his beloved Son (Matthew 3:16f.). The Trinity is seen in all three persons at one place at one time.

Jesus prayed that the Father would send another Comforter (John 14:16). Showing again the three persons of the Trinity. Jesus prays – to the Father – for the Parcletos.

The disciples were told to baptize in the name (singular) of the Father, the Son, and the Holy Spirit (Matt. 28:19). Why would they be given this command if there was only Jesus, or only the Father?

Also, the apostolic benediction unites the three together (2 Cor. 13:14). Was Paul deluded in believing in the Father, Son and Holy Spirit?

2. Jesus Prays to the Father

If there is no Trinity and Jesus is actually the Father or the Father is actually Jesus, then when Jesus prays to the Heavenly Father it can only mean one of two things. 1) Jesus is a lunatic who is speaking to himself or 2) He is a charlatan and a liar who seeks to delude and deceive those who follow him.

The only way we can reconcile Jesus praying to the Father is to understand, just as Jesus did, just as the hearers then did, that the Father is in Heaven and separate from Himself.

3. The Father, The Son and The Holy Spirit are all Shown In Scripture As God.

Logically and theologically speaking if the Father, Jesus and the Holy Spirit are all called and as seen as God then they are all God, separate persons, but one God.

4. The Father, The Son and the Holy Spirit all do works that only God could do.

5. The Father, The Son and the Holy Spirit all share attributes that only God could possess.

Definition of the Trinity

The word "trinity" is a term used to denote the Christian doctrine that God exists as a unity of three distinct persons: Father, Son, and Holy Spirit.  Each of the persons is distinct from the other yet identical in essence.  In other words, each is fully divine in nature, but each is not the totality of the other persons of the Trinity.  Each has a will, loves, and says "I" and "You" when speaking.  The Father is not the same person as the Son, who is not the same person as the Holy Spirit, and who is not the same person as the Father.  Each is divine, yet there are not three gods but one God. There are three individual subsistences or persons.  The word "subsistence" means something that has a real existence.  The word "person" denotes individuality and self-awareness.  The Trinity is three of these though the latter term has become the dominant one used to describe the individual aspects of God known as the Father, the Son, and the Holy Spirit. – Matt Slick, CARM (Christian Apologetics and Research Ministry)

The Bible shows very clearly that there is only one God, and yet that there are three personal distinctions in His complex nature, traditionally referred to as “three Persons in the Godhead”—God the Father, God the Son, and God the Holy Spirit.

Each is distinct from the others but never acts independently. They are one in nature and purpose. This mystery is called the doctrine of the Trinity, though that term is not used in the Bible. The teaching, however, is present in seed form in the Old Testament and is revealed explicitly in the New Testament. Note passages such as Matthew 28:19; John 10:30, 14:26; 2 Corinthians 13:14. – Billy Graham Organization

Christian Creeds and Confessions of the Trinity of God

“We worship one God in the Trinity, and the Trinity in unity; we distinguish among the persons, but we do not divide the substance. The entire three persons are coeternal and coequal with one another, so that. . . we worship complete unity in Trinity and Trinity in unity.”

In this divine and infinite Being there are three subsistences, the Father, the Word or Son, and Holy Spirit, of one substance, power, and eternity, each having the whole divine essence, yet the essence undivided: the Father is of none, neither begotten nor proceeding; the Son is eternally begotten of the Father; the Holy Spirit proceeding from the Father and the Son; all infinite, without beginning, therefore but one God, who is not to be divided in nature and being, but distinguished by several peculiar relative properties and personal relations; which doctrine of the Trinity is the foundation of all our communion with God, and comfortable dependence on him.

We believe that there is One, and only one, living and true God; an infinite, intelligent Spirit, the maker and supreme ruler of heaven and earth; He is inexpressibly glorious in holiness and worthy of all possible honor, confidence and love; that in the unity of the Godhead there are three Persons: The Father, The Son, and the Holy Ghost, equal in every divine perfection, and executing distinct but harmonious offices in the great work of redemption.