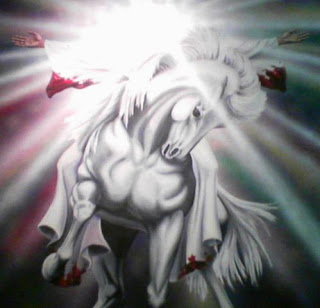 There are many who will believe that there was a man named Jesus who lived over two centuries ago was a great teacher, a great prophet, perhaps the greatest man ever born, but they will not believe that He was anything more than just a man or prophet.

Yet, since our eternal destiny rests upon Him, it is imperative that we know Jesus was God, for no mere mortal can gain eternal life for himself much less all those who believe in him.

Romans 9:5 Whose are the fathers, and of whom as concerning the flesh Christ came, who is over all, God blessed for ever. Amen.

Hebrews 1:8 But unto the Son he saith, Thy throne, O God, is for ever and ever: a sceptre of righteousness is the sceptre of thy kingdom.,

Titus 2:13 Looking for that blessed hope, and the glorious appearing of the great God and our Saviour Jesus Christ;

He claims Deity
John 8:58  Jesus said unto them, Verily, verily, I say unto you, Before Abraham was, I am.,

John 10:30-33  I and my Father are one.  Then the Jews took up stones again to stone him.  Jesus answered them, Many good works have I shewed you from my Father; for which of those works do ye stone me?  The Jews answered him, saying, For a good work we stone thee not; but for blasphemy; and because that thou, being a man, makest thyself God.

Mark 2:7-12 Why doth this man thus speak blasphemies? who can forgive sins but God only?  And immediately when Jesus perceived in his spirit that they so reasoned within themselves, he said unto them, Why reason ye these things in your hearts?  Whether is it easier to say to the sick of the palsy, Thy sins be forgiven thee; or to say, Arise, and take up thy bed, and walk?  But that ye may know that the Son of man hath power on earth to forgive sins, (he saith to the sick of the palsy,)  I say unto thee, Arise, and take up thy bed, and go thy way into thine house.  And immediately he arose, took up the bed, and went forth before them all; insomuch that they were all amazed, and glorified God, saying, We never saw it on this fashion.

He is Equated with God In Scripture
Philippians 1:2  Grace be unto you, and peace, from God our Father, and from the Lord Jesus Christ.

Matthew 28:18-20  And Jesus came and spake unto them, saying, All power is given unto me in heaven and in earth.  Go ye therefore, and teach all nations, baptizing them in the name of the Father, and of the Son, and of the Holy Ghost:  Teaching them to observe all things whatsoever I have commanded you: and, lo, I am with you alway, even unto the end of the world. Amen.

He is worshiped as God
Matthew 2:11 And when they were come into the house, they saw the young child with Mary his mother, and fell down, and worshipped him: and when they had opened their treasures, they presented unto him gifts; gold, and frankincense, and myrrh.

Matthew 14:33 Then they that were in the ship came and worshipped him, saying, Of a truth thou art the Son of God.

Matthew 28:9 And as they went to tell his disciples, behold, Jesus met them, saying, All hail. And they came and held him by the feet, and worshipped him.

Hebrews 1:6 And again, when he bringeth in the firstbegotten into the world, he saith, And let all the angels of God worship him.

His Works and Attributes Show Him As God
He Is Eternal:

Revelation 1:8 I am Alpha and Omega, the beginning and the ending, saith the Lord, which is, and which was, and which is to come, the Almighty.

Mic 5:2 But thou, Bethlehem Ephratah, though thou be little among the thousands of Judah, yet out of thee shall he come forth unto me that is to be ruler in Israel; whose goings forth have been from of old, from everlasting.

Matthew 28:18 And Jesus came and spake unto them, saying, All power is given unto me in heaven and in earth.

Lk 5:22 But when Jesus perceived their thoughts, he answering said unto them, What reason ye in your hearts?

Lk 6:8 But he knew their thoughts, and said to the man which had the withered hand, Rise up, and stand forth in the midst. And he arose and stood forth.

John 2:24-25  But Jesus did not commit himself unto them, because he knew all men, And needed not that any should testify of man: for he knew what was in man.

Jn 6:64 — But there are some of you that believe not. For Jesus knew from the beginning who they were that believed not, and who should betray him.

John 3:13 And no man hath ascended up to heaven, but he that came down from heaven, even the Son of man which is in heaven.

He Created the Universe:

Colossians 1:16 For by him were all things created, that are in heaven, and that are in earth, visible and invisible, whether they be thrones, or dominions, or principalities, or powers: all things were created by him, and for him:

He Gives Eternal Life
John 5:21 For as the Father raiseth up the dead, and quickeneth them; even so the Son quickeneth whom he will.

He Gives Holy Scripture
1 Peter 1:10-12 Of which salvation the prophets have enquired and searched diligently, who prophesied of the grace that should come unto you:  Searching what, or what manner of time the Spirit of Christ which was in them did signify, when it testified beforehand the sufferings of Christ, and the glory that should follow.  Unto whom it was revealed, that not unto themselves, but unto us they did minister the things, which are now reported unto you by them that have preached the gospel unto you with the Holy Ghost sent down from heaven; which things the angels desire to look into.

Conclusion – C S Lewis on Deity of Christ
I am trying here to prevent anyone saying the really foolish thing that people often say about Him: 'I'm ready to accept Jesus as a great moral teacher, but I don't accept His claim to be God.' That is the one thing we must not say. A man who was merely a man and said the sort of things Jesus said would not be a great moral teacher. He would either be a lunatic -- on the level with the man who says he is a poached egg -- or else he would be the Devil of Hell. You must make your choice. Either this man was, and is, the Son of God: or else a madman or something worse. You can shut Him up for a fool, you can spit at Him and kill Him as a demon; or you can fall at His feet and call Him Lord and God. But let us not come with any patronizing nonsense about His being a great human teacher. He has not left that open to us. He did not intend to. – Mere Christianity, pages 40-41.