Christians and Strangers Pt. 3: Strangers Who are Missionaries


Strangers Who Are Missionaries

Beloved, thou doest faithfully whatsoever thou doest to the brethren, and to strangers; Which have borne witness of thy charity before the church: whom if thou bring forward on their journey after a godly sort, thou shalt do well: Because that for his name’s sake they went forth, taking nothing of the Gentiles. We therefore ought to receive such, that we might be fellowhelpers to the truth. - 3 John 5-8 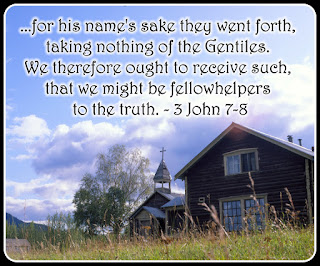 As Christians, in love and obedience to our Lord, we are to open our homes and lives to strangers who serve our Lord as missionaries. John receives a report back from the brethren who had visited Gaius and been entertained my him.  He says, "I rejoiced greatly." He commends him for walking in truth and then says, "thou doest faithfully whatsoever thou doest to the brethren and to strangers."

They bore witness of his sacrificial love and John commends him for bringing them forward on their journey.  He says doing so means doing well. Then he tells them why "For his names sake they went forth.  We therefore ought to receive such that we might be fellow helpers to the truth."

The great Greek Scholar, A.T. Roberson says about this verse, "Since they are God’s representatives, treat them as you would God"

John commended Gauis especially because there were those in the church who did oppose caring for the strangers his name was Diotrephes and John says of him, "He received us not." I believe the Bible teaches that the highest form of hospitality if that on behalf of missionaries. If God is pleased when we are open to the lost, if he rewards when we are hospitable to the saints then how much more so when we are to those who are strangers for His sake and the sake of the gospel?

Thank God for a church that is not afraid to step out in faith and take on the burden and care of a missionary.  Thank God, for they know it is more than just a room to sleep in but is an extension of the home, heart and hearth. There is no greater sense of joy that comes to me as a Christian then sitting down to eat with a family that is on its way to literally a "God forsaken land" and sharing in some small way to help that journey.

You want to see the difference of Christianity today and Christianity a century or two ago?  Then look to the quality of hospitality, so neglected today that it is not even thought about as a subject for a sermon much less the mark of a Church's life.

We neglect our duty to the lost, our duty to one another and our duty to missionaries and blame it all on a changing culture and society.  Yet it is our culture and our heritage as "people of the Book" that we have forsaken. We have been absorbed into a culture of selfishness and apathy.
If you really want to see how close you are to conforming to the character of Christ.  Then look no further than the characteristic of "loving strangers."
Posted by D. Kris Minefee at 8:28 AM