Five Reasons Hell Must Be Real


Five Reasons Hell Must Be Real 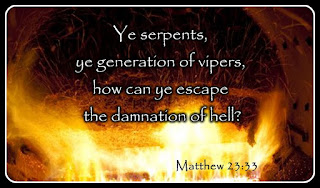 My purpose in doing this study, is not to prove hell, heaven or anything supernatural to an unbeliever but to establish in the minds of Christians that the Bible teaches that Hell is a real place and that there must be a place like hell for those who reject God and His salvation through Jesus Christ.

Background on the word, Hell. The Old English hel belongs to a family of Germanic words meaning “to cover” or “to conceal.” Hel is also the name, in Old Norse, of the Scandinavian queen of the underworld. Many English translations of the Bible use hell as an English equivalent of the Hebrew terms Sheʾōl (or Sheol) and Gehinnom, or Gehenna (Hebrew: gê-hinnōm).

In Mesopotamian, hell is described as a distant land of no return, a house of dust where the dead dwell without distinction of rank or merit, and a sealed fortress, typically of seven gates, barred against invasion or escape. The god-king Gilgamesh travels to the end of the world, crosses the sea of death, and undergoes terrible trials and then realizes that that mortality is inescapable. In the Gilgamesh epic, Hell is a house of darkness where the dead “drink dirt and eat stone.”
In Egypt after death the dead were judged by Osiris, those who failed the test based upon their goodness and preparation for the afterlife, were devoured by a crocodile headed monster and then tormented by demons or much worse.

In Greek and Roman belief, hell is called hades, the word most often used for Hell in the KJV. Hades is named after the God, Hades, who ruled there. People in his realm could be both bad or good and hades or hell was in general an abode of the dead. Those that were evil or had offended the gods, however were sent to the field of Tartarus where they were tormented

In Persian and Zoroastrian beliefs, hell is overseen by Yima, the first person to die and is the place where all that is evil, dark and opposing life dwells. Demons there torture sinners until one day, like purgatory they have paid a price and the torment stops.

In Muslim tradition hell is a combination of the beliefs of hell that have preceded it. It contains elements of Egyptian, Zoroastrian, Jewish and Christian versions of hell. Life deeds are recorded, the soul is weighed, there is a bridge, which widens for the righteous but narrows to a knife-edge for sinners, who lose their footing and plunge into the flames below. In Islam God predestines all things and yet somehow holds individuals accountable for their choices.

In Hinduism, which believes in reincarnation and the soul’s continual rebirth, those who commit terrible sins are reborn into hell and spend time there until they can be reborn on a lower plane of existence as a bug or a rat.

In Buddhism there are multiple hot hells beneath the earth, or in millions of universes in which humans suffer but there are buddhas (teachers) there to show them the error of their ways. In Buddhism all hells as well as all life, is actually and illusion, so there is that. Still the suffering of those in hell and those reborn as hungry ghosts is excruciating,

The point is before you dismiss the idea of hell completely you have to find a way to explain why such a belief is nearly universal in all societies and civilizations throughout history. Why would they believe in hell unless there was a common source for that belief? The best explanation for that source would be God who revealed it to man before the flood and the dispersion of mankind at Babel.

Reason 2. Old Testament Declares There is A Hell

In the Old Testament, the word Sheol is the word translated Hell. In general, it refers to “the abode of the dead”

Reason 3. New Testament Declares There Is A Hell

The word hades occurs four times in the Gospel while the word Gehenna occurs eleven times both words are translated as hell. The Gospels also use words like darkness and fire to describe eternal punishment.

Gehenna literally, the "Valley of (the son of) Hinnom." In the Old Testament it was a place of horrific sin committed by Kings Ahaz and Manasseh and their people, who burned sacrifices to Moloch there,
These sacrifices included their own sons, burning them in the outstretched hands of the idol as it was heated searing red. 2 Chron 28:3; 33:6; 2 Kings 16:3

Because of this terrible desecration, the valley of Hinnom was turned into a dumping grounds for the city of Jerusalem. All the refuse of the city, including dead animals and dead criminals were thrown there. A fire was kept continually burning in order to consume the refuse and dead.
Outside the Gospel the rest of the New Testament consistently shows hell as a place of eternal torment, punishment and regret.

Jude 1:7 Even as Sodom and Gomorrha, and the cities about them in like manner, giving themselves over to fornication, and going after strange flesh, are set forth for an example, suffering the vengeance of eternal fire.

Jude 1:13 Raging waves of the sea, foaming out their own shame; wandering stars, to whom is reserved the blackness of darkness for ever.
of destruction

2 Thessalonians 1:7-9  And to you who are troubled rest with us, when the Lord Jesus shall be revealed from heaven with his mighty angels,  In flaming fire taking vengeance on them that know not God, and that obey not the gospel of our Lord Jesus Christ:  Who shall be punished with everlasting destruction from the presence of the Lord, and from the glory of his power;
and of everlasting, unremitting torment

Revelation 20:10 And the devil that deceived them was cast into the lake of fire and brimstone, where the beast and the false prophet are, and shall be tormented day and night for ever and ever.
Not only does the New Testament warn us of hell but its most vocal teacher is Jesus Christ.

One of the most obvious difficulties in denying hell as a place of eternal punishment comes from the fact that Jesus was the New Testament’s most passionate advocate in warning about the torment of hell. If you would deny hell then it would seem you must deny Jesus as well.

A man who was merely a man and said the sort of things Jesus said wouldn't be a great moral teacher. He'd be either a lunatic on a level with a man who says he's a poached egg or else he'd be the devil of hell. You must make your choice. Either this man was, and is, the Son of God, or else a madman or something worse. - C. S. Lewis

First prepared for the devil and his angels

Matthew 25:41 Then shall he say also unto them on the left hand, Depart from me, ye cursed, into everlasting fire, prepared for the devil and his angels:
Now also a place for those who reject God and Jesus His Son

Matthew 8:10-12 When Jesus heard it, he marvelled, and said to them that followed, Verily I say unto you, I have not found so great faith, no, not in Israel.  And I say unto you, That many shall come from the east and west, and shall sit down with Abraham, and Isaac, and Jacob, in the kingdom of heaven.  But the children of the kingdom shall be cast out into outer darkness: there shall be weeping and gnashing of teeth.

Sinners, Jesus warned, would be judged and sent there

Matthew 23:15 Woe unto you, scribes and Pharisees, hypocrites! for ye compass sea and land to make one proselyte, and when he is made, ye make him twofold more the child of hell than yourselves.

Matthew 23:33  Ye serpents, ye generation of vipers, how can ye escape the damnation of hell?
Matthew 13:41-42 The Son of man shall send forth his angels, and they shall gather out of his kingdom all things that offend, and them which do iniquity;  And shall cast them into a furnace of fire: there shall be wailing and gnashing of teeth.

Jesus said hell’s location was in the depths, the opposite of the heights of heaven, just as it was stated in the Old Testament

Luke 10:15 And thou, Capernaum, which art exalted to heaven, shalt be thrust down to hell.

Jesus taught that hell would be an eternal, conscious punishment.

Jesus taught that in hell torment would be eternal and unending. He said the worm feeding on the dead, would not die

Mark 9:48 Where their worm dieth not, and the fire is not quenched. the "fire that is not put out"
He taught that "weeping and gnashing of teeth" was always ongoing

Matthew 25:30 And cast ye the unprofitable servant into outer darkness: there shall be weeping and gnashing of teeth.

Reason 5. Hell Is Real Because Man’s Choice Makes It Necessary

If man was created in the image of God, with the ability to choose right and wrong, then man must also be allowed in that free will to experience the reward of good choices and the punishment or bad choices. The choice to reject God, when God gave to man, must then have a consequence and the only place such a consequence can be real is in hell.

In the long run the answer to all those who object to the doctrine of hell, is itself a question: What are you asking God to do? To wipe out their past sins and, at all costs, to give them a fresh start, smoothing every difficulty and offering every miraculous help? But He has done so, on Calvary. To forgive them? They will not be forgiven. To leave them alone? Alas, I am afraid that is what He does. - C. S. Lewis

The strongest objection (to hell as an eternal punishment) is thought to be the idea that a God of love could not punish his creatures eternally. But this is to forget that at death character is fixed, and that the law of congruity (same with same) requires that the (eternal) living be separated from the (eternal) dead. It is not a question of God’s love, but of the soul’s life. – Henry Thiessan

Scripture sees hell as self-chosen; those in hell will realize that they sentenced themselves to it by loving darkness rather than light, choosing not to have their Creator as their Lord, preferring self-indulgent sin to self-denying righteousness, and (if they encountered the gospel) rejecting Jesus rather than coming to him (John 3:18-21; Rom. 1:18, 24, 26, 28, 32; 2:8; 2 Thess. 2:9-11). General revelation confronts all mankind with this issue, and from this standpoint hell appears as God's gesture of respect for human choice. All receive what they actually chose, either to be with God forever, worshiping him, or without God forever, worshiping themselves. Those who are in hell will know not only that for their doings they deserve it, but also that in their hearts they chose it. – J. I. Packer, Concise Theology

No matter what you choose to believe, the reality of the Bible teaching that hell and the Lake of Fire as real, and as places of judgment and punishment can’t be denied. You can make up ways that it no longer applies, or philosophy that God’s love over rules his justice, but you can’t make the Bible say something it does not.

Hell is real, the Bible taught it, Jesus preached it and you and I better be saved to avoid it. It really is that basic.