On The Mount Christians: Living and Looking for the Kingdom


On The Mount Christians:
Living and Looking for the Kingdom

Purpose of the Study

The purpose of this study is to understand the teachings of the Sermon on the Mount as relevant in the life of the present-day Christians.  Some have mistakenly taken the Sermon as the marching orders for the church, when it is plainly dealing with the future Kingdom of God which will be established by Jesus Christ at his second coming.  Others seeing this have mistakenly written off the entire message as only being prophetic.  This ignores the fact that though the Kingdom is future our King is with us now and we are presently citizens of that coming kingdom.   As citizens we are required to be both ambassadors and recruiters for the Kingdom of God.  In a very real way we are invaders intent upon conquering but using weapons and acting in a way which is in keeping with the King of love whom we serve. 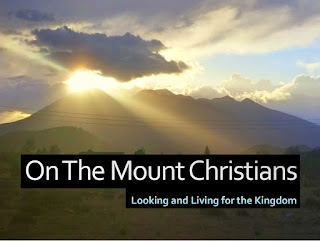 Let us begin this study by looking at the outline and the diagram of the Sermon on the Mount.

I. Background and Survey
OUTLINE OF SERMON ON THE MOUNT
MATTHEW 5-7

Diagram of Sermon on the Mount

First, the Sermon on the Mount has few truths about salvation by grace, prayer, the formation of the church or the gift of the Holy Spirit. If the Sermon was inted to be primarily for the church age then these missing truths are a problem.

Second, many things taught by Christ in the Sermon not only repeat the law, “Thou hast heard it said,” but actually increase the law and its penalty, “But I say unto you.” If one were to use the Sermon as a means of showing someone how to be saved there is only condemnation but no clear means of salvation.

Thirdly, if Christians were meant to obey the Sermon on the Mount in this present age it would be almost impossible to do and be able to function in almost any human society. Statements against violence, “turn the other cheek” would mean a country could not defend itself, or any Christian defend their home nor could any Christian serve in the military. Commands to give to any that ask or seek to borrow would mean a Christian could not be a banker, at least not a profitable one.

Difficult Scriptures For The Church Age

Matthew 5:30
And if thy right hand offend thee, cut it off, and cast it from thee: for it is profitable for thee that one of thy members should perish, and not that thy whole body should be cast into hell.

Matthew 5:39-42
But I say unto you, That ye resist not evil: but whosoever shall smite thee on thy right cheek, turn to him the other also.  And if any man will sue thee at the law, and take away thy coat, let him have thy cloke also.  And whosoever shall compel thee to go a mile, go with him twain.  Give to him that asketh thee, and from him that would borrow of thee turn not thou away.

The proper place and primary interpretation then for the Sermon On The Mount is the future Kingdom of God upon the earth that will be instituted when Christ returns as its King and rules the nation with a rod of iron.

It has application for us, because we are members of the Kingdom through the new birth, but only when Christ rules and reigns upon the earth can the Sermon on the Mount be fully implemented. It is not the marching order of the church as those were given in Matthew 28:18-20 at the end of Christ time on earth and just before the full empowering of the church on the Day of Pentecost. Much in the Sermon on the Mount can and should be applied within our churches and in our own individual lives but that is an application and not the interpretation of this powerful message. The primary purpose of the Sermon is as a description of the citizens of Kingdom of God that will ruled by Jesus Christ when He returns.

Why do you think Christ gave a sermon about the coming Kingdom of God instead of the plan of salvation or the church at this time in His ministry?

John the Baptist and Jesus both preached the same message during and just before Jesus started his public ministry. “Repent for the Kingdom of God is at hand.” The nation of Israel had to be offered the Kingdom and shown its King. The Sermon on the Mount was a presentation of that Kingdom and those who would enter it. Israel as a nation refused both, they would not repent, nor would they accept Jesus of Nazereth as the true Messiah. The gospel was then refocused through the church to the Gentiles.

Was the church and the Gospel to the Gentiles a fall back  or Plan B if Israel refused to accept Jesus?

No, there is no plan B with God. The offer had to be made but God knew Israel would not humble itself, repent and believe. The church, which began on the mount, was not an afterthought, but a mystery revealed by Christ during his eartly ministry.