Galatians: In Defense of Grace


Galatians: In Defense of Grace

GALATIA
The ancient ethnic kingdom of Galatia located in the N of the great inner plateau of Asia Minor, including a large portion of the valley of the Halys river.
A great population explosion in central Europe brought Gauls  (Celts) into this area during the 3rd century BC. Although never in the majority, the Gauls gained the upper hand and ruled over the more numerous tribes of Phrygians and Cappadocians. Ultimately the Gauls separated into three tribes, each inhabiting a separate area: the Trokmi settled in the E which bordered on Cappadocia and Pontus, with Tavium as their capital; the Tolistobogii inhabited the W bordering on Phrygia and Bithynia, with Pessinus as their chief town; and the Tektosages settled in the central area with Ancyra as their principal city.

The Roman province of Galatia.
In 64 BC Galatia became a client of the Romans and, after the death of Amyntas, its last king, was given full status as a Roman province (25 BC). The new province of Galatia included not only the old ethnic territory but also parts of Pontus, Phrygia, Lycaonia, Pisidia, Paphlagonia and Isauria. Within the provincial Galatia were the towns which the apostle Paul evangelized on his first missionary journey, viz. Antioch, Iconium, Lystra and Derbe (Acts 13-14). The latter two cities were Roman colonies, and the former two had been Romanized by the emperor Claudius. Large numbers of Romans, Greeks and Jews were attracted to these population centers because of their strategic geographical location.
A particularly difficult question arises out of Paul's use of the word 'Galatia' in the Epistle to the Galatians (1:2). Does Paul use the term in its geographical sense, i.e., to denote the ancient ethnic kingdom of Galatia, or in its political sense, to denote the Roman province by that name? NT scholars are almost evenly divided on this question (*Chronology of the New Testament).

It is clear from the account in Acts 13-14 that Paul visited S Galatia and established churches there. Did he ever conduct a mission in N Galatia? Two texts especially have been used to support such a ministry. The first (Acts 16:6) reads: 'And they went through the region of Phrygia and Galatia. . ..' N Galatian proponents understand 'Phrygia' here to be the territory in which Antioch and Iconium were located, whereas 'Galatia' refers to the geographical or ethnic kingdom by that name. Ramsay, however, takes the phrase te„n Phrygian kai Galatike„n cho„ran to be a composite term describing a single area—the Phrygian—Galatic region. The word cho„ra, 'territory', was the official word used to describe one of the regions into which Roman provinces were divided. Part of the old kingdom of Phrygia belonged to the Roman province of Galatia and another part belonged to the province of Asia. Thus Acts 16:6 refers to the parts of Phrygia which had been incorporated into the Roman province of Galatia. This interpretation is supported by the following statement in the Acts account, 'having been forbidden by the Holy Spirit to speak the word in Asia'. The plan of the missionary party apparently was to strike out directly in a W direction from Antioch of Pisidia, which would have taken them into the province of Asia. Instead they went N towards Bithynia, crossing only a part of Asia.

The other passage is Acts 18:23. Here the order of the words is reversed: '. . . and went from place to place through the region of Galatia and Phrygia, strengthening all the disciples'. The 'region of Galatia' here is probably 'Galatic Lycaonia, so called to distinguish it from eastern Lycaonia, which lay, not in the province of Galatia, but in the territory of King Antiochus' (F. F. Bruce, The Book of the Acts, 1954, p. 380). 'Phrygia' then would probably include both Galatic and Asiatic Phrygia, since on this occasion there was no prohibition to prevent Paul preaching the word in Asia. In neither of these passages in Acts does there seem to be any good reason to suppose that Galatia means N Galatia. It is doubtful that Paul ever visited the ancient kingdom to the N, much less that he conducted an extensive mission there. (*Galatians, IV).

Written to the churches of the region of of Galatia (1:2, 3:1). Some of the first churches that Paul and Barnabus had established on their first missionary journey.
Paul's Missionary Journey: AD 47-49 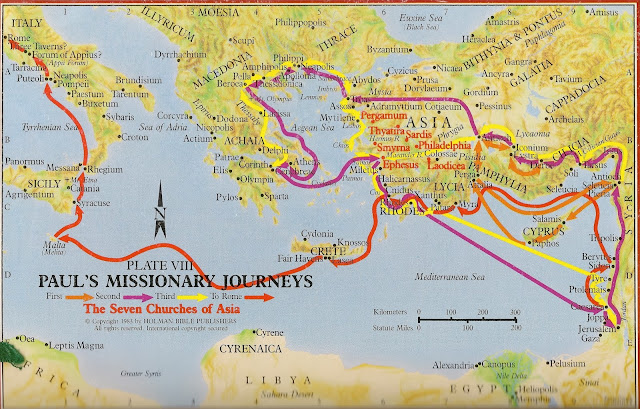 Mission to the Galatians

1 Paul and Barnabas sent out by the Antioch church, with John Mark (Acts 13:1-3).
2 They encounter Bar-Jesus, false prophet and friend of the governor. Bar-Jesus is struck blind. The governor believes (Acts 13:4-12).
3 John Mark leaves to go back to Jerusalem (Acts 13:13).
4 Paul preaches to Jews and Gentiles. The Jews are jealous and stir up opposition (Acts 13:14-52).
5 They stay a long time. Many Jews and Gentiles become believers. A Gentile plot on their lives forces them on (Acts 14:1-7).
6 Paul heals a cripple. They are hailed as gods. Enemies arrive from Antioch and Iconium—they are almost killed (Acts 14:8-20).
7 Many more disciples won. They return the way they came, encouraging the young churches (Acts 14:21-26).
8 They report everything to thechurch in Antioch (Acts 14:27-28).

Date of the letter
Written sometime after the first missionary journey but before the Jerusalem Council, which took place in 49 AD. It is usually assigned the year 48 AD.

Purposes
To expose the false teachings of the Judaizer.
To defend Paul's apostleship.
To emphasize that salvation is through faith alone.
To exhort the Galatian Christians to live in liberty, bringing forth fruit of the Spirit.

Relation to other New Testament Books
Galatians is a book concerning soteriology, the study of salvation.

James
Galatians teaches liberation by the gospel.
James teaches compulsion of the gospel.

Romans
Both concern justification by faith.
Galatians, written earlier, is a first draft of the later and much larger Romans. 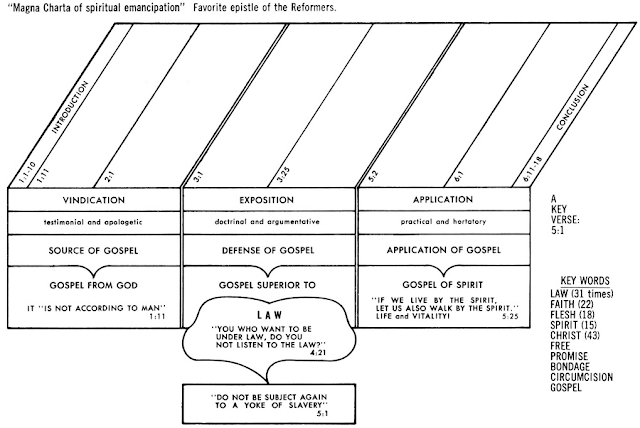 Salutation 1:1-5
Paul, an apostle, (not of men, neither by man, but by Jesus Christ, and God the Father, who raised him from the dead;)  And all the brethren which are with me, unto the churches of Galatia:  Grace be to you and peace from God the Father, and from our Lord Jesus Christ,  Who gave himself for our sins, that he might deliver us from this present evil world, according to the will of God and our Father:  To whom be glory for ever and ever. Amen.

Apostle
Definition:  Apostolos, messenger, one sent forth with orders

Not of Men
How does this negative set the tone for the following letter?
The letter is a polemic, an exposure of error to portray the truth to better advantage - Wycliffe

Grace
Definition: 5485 charis {khar'-ece}
AV - grace 130, favour 6, thanks 4, thank 4, thank + 2192 3,     pleasure 2, misc 7; 156
good will, loving-kindness, favour, of the merciful kindness by which God, exerting his holy influence upon souls, turns them to Christ, keeps, strengthens, increases them in Christian faith, knowledge, affection, and kindles them to the exercise of the Christian virtues

In Paul’s salutations grace always precedes peace.  Why do you think this might be?
There can be no true peace without first knowing God's grace.

Peace
eirene {i-ray'-nay}
AV - peace 89, one 1, rest 1, quietness 1; 92
of Christianity, the tranquil state of a soul assured of its   salvation through Christ, and so fearing nothing from God and content with its earthly lot, of whatsoever sort that is

Why might Paul choose these words for the Galatians?
The false gospel, being taught to them by the Judizers, denies grace and takes away the real peace they had once possessed through faith.

From our Lord Jesus Christ who gave himself for our sins

What was the purpose of Jesus’ sacrifice?
To deliver us from this present evil world

What is this giving us? Deliverance which is ours now.

What is Paul introducing by emphasizing Christ’s sacrifice?  The price of salvation that has already been paid.

What was the means or origin of our Jesus giving himself?
The will of God our Father.
Posted by D. Kris Minefee at 6:35 AM