On The Mount Christians Lesson 3 Purpose, Precedent and Provocation 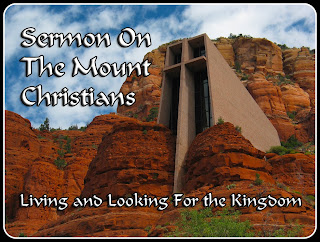 13  Ye are the salt of the earth: but if the salt have lost his savour, wherewith shall it be salted? it is thenceforth good for nothing, but to be cast out, and to be trodden under foot of men.  14   Ye are the light of the world. A city that is set on an hill cannot be hid.  15  Neither do men light a candle, and put it under a bushel, but on a candlestick; and it giveth light unto all that are in the house.  16  Let your light so shine before men, that they may see your good works, and glorify your Father which is in heaven.

After Jesus tells His follows the characteristics that should be in them, he now tells them their purpose, why they are here and what they are to accomplish on this earth until His kingdom comes.

What did Jesus say that citizens of the Kingdom are?
The salt of the earth.

In Jesus time salt was used for two distinct things, to flavor food and to preserve.  How can I apply this to my life?

Christians are to have two major purposes in life.  1.  We are to flavor or influence those around us just as salt flavors whatever dish it is in.  2.  We are to preserve our families, community and nation.

What are some ways in which I should be influencing and preserving?
Sharing the Gospel, standing for God’s law and Word. Praying for our community, family and nation.

What is the danger that Christ warns about?
The salt losing its savor, literally its saltiness, its power to do its job.  Salt in the middle east during this time was mined with many impurities still in it. Moisture could remove the salt and leave the other minerals behind.

How do we know when Citizens of the Kingdom have lost their saltiness?
They are no longer strong enough to influence or preserve their society or culture.

Exactly how do Citizens of Kingdom lose their savor, their saltiness?
They excuse sin, they preach another gospel, they minimize God’s judgment, they deny the truth of the Bible and deny the reality of Hell and its eternal consequences.

Application: Have we as a Christian nation lost our saltiness? What about as a church or as an individual? How much am I influencing and preserving those around me?

What is the second purpose that Jesus tells us we are supposed to fulfill?
We are to be light.

What is implied with the statements about the city set on a hill and the lamp set under a basket?
We are to be seen in the darkness,  not shut away from it.  As Christians we are failing if we do not let our light shine through the darkness of this world.

According to Jesus, what is the purpose of our good works?
Our good works are to bring others to see the true source of the light, our heavenly Father.

What does Paul say we are to be?
We are to be to the praise of His glory.  Our life is to cause others to praise the glory of God.

17  Think not that I am come to destroy the law, or the prophets: I am not come to destroy, but to fulfil.  18  For verily I say unto you, Till heaven and earth pass, one jot or one tittle shall in no wise pass from the law, till all be fulfilled.  19  Whosoever therefore shall break one of these least commandments, and shall teach men so, he shall be called the least in the kingdom of heaven: but whosoever shall do and teach them, the same shall be called great in the kingdom of heaven.  20  For I say unto you, That except your righteousness shall exceed the righteousness of the scribes and Pharisees, ye shall in no case enter into the kingdom of heaven.

Jesus now presents himself as the precedent, the example and path finder for the Salt and Light principles by stating that He will fulfill the law and the prophets.  The “law and the prophets” was a common expression for the scriptures of the Old Testament.

As someone hearing these words for the first time what would have been your reaction?
Shock or surprise at Jesus’ confidence in Himself and His strictness on me. His authority over the teachers of old would have been scandalous and set himself up as a greater authority and teacher than all who have gone before.

Is it possible to not break the law? No.

Though it is not expressly stated here, what is the only way anyone can fulfill the law and the prophets or exceed the righteousness of the
Scribes and Pharisees?

It must be done on my behalf by someone who is perfectly holy and righteous.  Jesus is the only one who never sinned and then gave his sinless life as an ransom upon the cross.  His sinless life and vicarious death must be accepted as the only means of fulfilling the law.

In this context and to these hearers what would the phrase “enter into the kingdom of heaven” mean?
To have a part in the coming earthly kingdom of the Messiah.

To us as New Testament believers, what does it mean?
It is the salvation of our soul by grace through faith, which makes us citizens of that still coming kingdom.

What is Jesus’ purpose in contrasting the sayings of old time with His own?
To force them to realize that what they thought they knew was wrong, even if taught by supposedly great teachers.

Compare the old teaching with Jesus’ teaching in these verses.

What is the difference in the two saying?
Jesus has already said that only He is the fulfillment of the law.  He now sets an even more rigid standard for the law than the teachers of old.

What does this lead us to understand?
That Jesus is more than just another teacher of the law.  He is its beginning and end.  He is greater than the law and the only way we can avoid the penalty of the law is through Him.

Should I try to live up to the new laws that Jesus outlines in Matthew 5?
Our life is in Christ, who has already fulfilled the law.  If I allow Him to fill my life, there will be no need of worrying about the law.  His power and influence in my life will supersede the law just as Jesus’ teaching superseded the older teaching of the law.

Jesus was not an easy preacher to listen to. His sermons, his parables and his actions were startling, provocative and forced people to think about what he was actually saying.  This was especially true at the Sermon on the Mount the Jewish people came to hear a man say he was the Messiah and seek their approval instead they were told they had no idea what it meant to be a member of the Kingdom of Heaven. Those who listened were challenged, those who believed were changed.
Posted by D. Kris Minefee at 6:47 AM