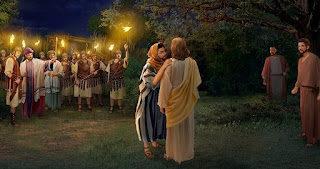 The agony in Gethsemane is found in Matthew 26:30 and Mark 14:26  John does not include it here probably because he wrote last and knew it was in Matthew and Marks account.

Vs. 2. How did Judas know where to look for Jesus?
He often went there with his apostles.

What does this tell us of the prayer life of Jesus?
That he often sought out a quiet, secluded spot in which to sincerely pour out His heart before God.

What does it challenge us to do in our own times of turmoil and hurt?
Like Jacob on Penuel, Moses on Sinai, or Christ in the wilderness, we all need a secluded place to really do business with God.

Vs. 6 What was it in the words of Jesus that made the men fall back?
He said, “I am” (the words in italics are not in the original.)  The same words used by Jehovah when he spoke to Moses and identified Himself.

Vs. 10 What made Peter draw a sword?
To prove his boast to Christ earlier that night that he would not desert him and because of what Christ said in Luke 22:35-38.

Why was Jesus taken to Annas before he was taken to Caiaphas the High Priest?
Annas had been the high priest the year before and Caiaphas was his son-in-law.  Annas controlled the office for over 50 years.

Vs. 21 When Jesus asked, “Why asketh thou me?”  He may have been implying that this hearing before Annas was illegal, why?
Annas was not the true high priest and had no authority.  There were no witnesses called.  Jesus was being asked to implicate himself.

Peter’s Denial  John 18:15-18, 25-27
Who was the other disciple that followed Jesus into the house of Annas?
Probably John

After being willing to fight for Christ, why do you think Peter now denies Him?
Peter thought he understood what was to happen when they came for Jesus, but instead of fighting and dying he was rebuked and told to put up his sword.  He is confused, alone and afraid.  He is also under attack by Satan.  In such a state it is no wonder that He did what he did.

First Interview John 18:33-38
When Pilate asks Jesus if He was the king of the Jews, Jesus said his kingdom was not of this world.  What did he mean?
His earthly kingdom was yet to come.

What kind of kingdom then does Jesus speak of?
His spiritual kingdom was not something Pilate could understand.

Pilate dismisses Jesus talk truth with the question, “What is truth?”
What do you think he meant by that question?

Scourging was the severest form of punishment next only to crucifixion.  It was usually done with a cat o’ nine tails, a multiheaded whip often with bits of lead and bone braided into the whips.  The normal number of lashes was 39 as 40 was considered a death penalty.

Vs. 8 What finally forces Pilate to seriously consider Jesus?
The Jews said Jesus had proclaimed himself the Son of God.

Vs. 12-13  What finally caused Pilate to condemn Jesus?
The Jews threatened him with ignoring rebellion against Caesar.

What was the response of the Jews when Pilate offered them Jesus as their King?
“We have no king but Caesar.”

How does their response typify their relationship with Jesus throughout his ministry?
They refused him as their king from the very beginning choosing power and politics over truth and their true King.

What does Jesus habit of praying in solitude often challenge us to do in our own times of turmoil and hurt?
Like Jacob on Penuel, Moses on Sinai, or Christ in the wilderness, we all need a secluded place to really do business with God.

Can we be guilty of denying Christ? How?
Yes, through our words, actions or lack thereof we can and do  deny Him. Usually under much less pressure than Peter.

Using Peter’s story as a foundation, what can I learn to prevent my own denial of Christ?
Stay close to Christ especially in midst of trial.  Peter waited outside while John went in.
Don’t accept anything from the world.  Peter warmed himself by the fire and when it came time to take a stand he could not.

Pilate dismisses Jesus talk truth with the question, “What is truth?” What do you think he meant by that question?
That truth is changeable or subjective.

How does is compare to today’s philosophy of relativism? (Everything is relative.  What is true to you may not be true to me.)
Some basic idea though Pilate may have been dealing with truth between the Jews, himself and Jesus. Today it is not just powerful rulers who manipulate the church but anyone who doesn’t like the truth they hear.

Herod tried to not pass judgment on Jesus. Is it possible for us to decide not to decide?
No, a non-decision is still a decision and we will still be held responsible by God if by no one else.

Chronology of the Trial

3. Farewell Discourse to Disciples (Jerusalem in the evening before the crucifixion)
Joh 14:1-16:33

4. The Lord's Prayer (Jerusalem, Somewhere on the way to Garden of Gethsemane late at night)  John 17:1-26

12. Second Stage of the Roman Trial. Jesus Before Herod Antipas (Jerusalem. In the morning after sunrise) Lu 23:6-12 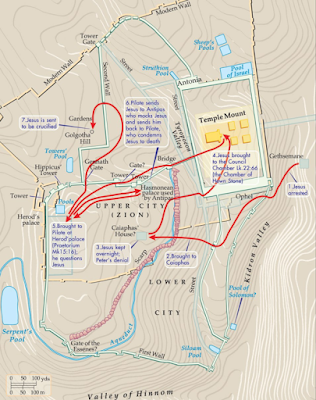 Jesus greatest agony still waits for him upon the cross but it did not start there. He has been awake for at least 24 hours, emotionally tormented on the way and in the Garden. He was arrested, beaten, illegally tried, ridiculed, humiliated and scourged in those 24 hours. All of these we are witness to through the Bible but none can know all that He suffers in His heart and in his mind knowing full well what still lies ahead.
When we consider all that He suffered and what He will suffer may we vow ourselves once again to serve Him in gratitude and humility considering all that He suffered for us