Misinterpreted, Misunderstood and Misapplied : Lesson 2 - Thou shalt not kill 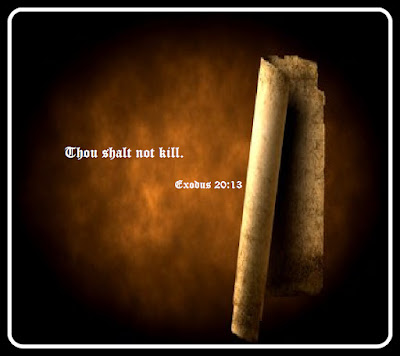 Matthew 22:23-20 The same day came to him the Sadducees, which say that there is no resurrection, and asked him, Saying, Master, Moses said, If a man die, having no children, his brother shall marry his wife, and raise up seed unto his brother. Now there were with us seven brethren: and the first, when he had married a wife, deceased, and, having no issue, left his wife unto his brother: Likewise the second also, and the third, unto the seventh. And last of all the woman died also. Therefore in the resurrection whose wife shall she be of the seven? for they all had her. Jesus answered and said unto them, Ye do err, not knowing the scriptures, nor the power of God.

Today there are many religious leaders, like the Sadducees who are pushing a personal agenda by misusing the Bible as a proof text for their own personal beliefs or worse to con people and misuse them for the false leaders own profit.

The Sadducees were one of the three main schools of religious thought in the time of Christ. Not as popular as the Pharisees, and not aesthetic like the Essenes. We know little about them other than what the Bible says. Mainly we know that they did not believe in bodily resurrection, angels or spirits or that the soul itself continued after death. This is why they tried to trap Jesus with the foolish question about the woman who had been married 7 times but never divorced. They were trying to create a scenario that would show how impossible a resurrected life would be. Jesus shut them down by telling them they were in error because they didn’t know scripture or the power of God. A terrible combination of a condemnation.

Lets look at some oft misused, misapplied and misinterpreted scriptures that we will try and properly exegete over the next few weeks. We may not cover all of these and we may add others and they come to mind. The following are very well know passages that are often, if not most of the time completely removed from the original meaning of the passage.

Misapplied. – God does not want you to kill anything, even a murderer should not be put to death. God is against the death penalty and God does not condone war. You cannot fight in a war if you are a Christian.

Exegesis – Context The context of the verse is the 10 commandments a compacted summary of the law of God that the nation of Israel was to keep as His people and nation. The rest of Exodus and Leviticus gives the full extant of the law from 10 to over 300 laws.

Word usage: The word for kill used here is רָצַח: rāṣaḥ. , It means to kill (a human being), especially to murder. – translated it other places as manslayer, and murderer. New translations use the word murder. So we can see the command is not against killing any human being, but an injunction against killing an innocent human being. You shall not murder.

Analogy of Scripture: If we let scripture interpret scripture by looking up other passage about murder and its punishment we can see that instead of being opposed to capital punishment, the Bible explicitly states it is the only just way of dealing with the crime of murder.

Capital punishment predates the 10 commandments and goes back to the commandments given to Noah after the flood. Genesis 9:6 Whoso sheddeth man's blood, by man shall his blood be shed: for in the image of God made he man.

This commandment is further expanded in Exodus 21:12-16 He that smiteth a man, so that he die, shall be surely put to death. And if a man lie not in wait, but God deliver him into his hand; then I will appoint thee a place whither he shall flee. But if a man come presumptuously upon his neighbour, to slay him with guile; thou shalt take him from mine altar, that he may die. And he that smiteth his father, or his mother, shall be surely put to death. And he that stealeth a man, and selleth him, or if he be found in his hand, he shall surely be put to death.

Summary - The passage is clearly stating that God prohibits murder. Any spilling of innocent blood brings the condemnation of God and under God’s rule of law, the murder must pay with his own life for the life he has taken. This is equitable because all men were made in the image of God. We are not animals but humans and that means within us, all of us is the divine spark that brought us to life. Therefore, only the payment of the life of the guilty is just.

Exodus 21:23-25 If men strive, and hurt a woman with child, so that her fruit depart from her, and yet no mischief follow: he shall be surely punished, according as the woman's husband will lay upon him; and he shall pay as the judges determine. And if any mischief follow, then thou shalt give life for life, Eye for eye, tooth for tooth, hand for hand, foot for foot, Burning for burning, wound for wound, stripe for stripe.

Misapplication: Vengeance is justified and it should be applied in the exact same way as the crime. Take an eye for an eye, a hand for a hand, etc.

Jesus quotes the passage in Matthew 5:38-39 Ye have heard that it hath been said, An eye for an eye, and a tooth for a tooth: But I say unto you, That ye resist not evil: but whosoever shall smite thee on thy right cheek, turn to him the other also.

In Deuteronomy 19:16-21 we gain a broader perspective of the meaning of the commandment, “If a false witness rise up against any man to testify against him that which is wrong; Then both the men, between whom the controversy is, shall stand before the LORD, before the priests and the judges, which shall be in those days; And the judges shall make diligent inquisition: and, behold, if the witness be a false witness, and hath testified falsely against his brother; Then shall ye do unto him, as he had thought to have done unto his brother: so shalt thou put the evil away from among you. And those which remain shall hear, and fear, and shall henceforth commit no more any such evil among you. And thine eye shall not pity; but life shall go for life, eye for eye, tooth for tooth, hand for hand, foot for foot.”

The Bible Knowledge Commentary says of this passage, “If … a pregnant woman delivered her child prematurely as a result of a blow, but both were otherwise uninjured, the guilty party was to pay compensation determined by the woman’s husband and the court. However, if there was injury to the expectant mother or her child, then the assailant was to be penalized in proportion to the nature of severity of the injury. While unintentional life-taking was usually not a capital offense (cf. vv. 12–13), here it clearly was. Also the unborn fetus is viewed in this passage as just as much a human being as its mother; the abortion of a fetus was considered murder. A person’s physical loss by injury was to be punished by a similar loss to the offender (vv. 24–25), the law of retaliation (cf. Lev. 24:19–20; Deut. 19:21). This law was designed to restrict the exacting of punishment to what was equitable.

Summary - This is not a barbaric punishment. It is not comparable to the Islamic Sharia law that advocate the cutting off or hands for a thief. This law is exactly the opposite and insures that such punishment will not be allowed. What God codified here and in the other OT passages is that “The punishment must fit the crime.” It is not about vengeance; it is about justice. Taking a hand for theft is not justice, but having the thief pay back that which was taken as well as a fine is. Killing a man for injuring your wife or unborn baby is not justice, but if that man killed them then after he was tried by the judges, the taking of his life was and is just.

The power of God’s word when correctly interpreted and applied is incredible. When those who hate God’s word or those who would try and use it to their own purposes, take the Bible out of context or ignore proper word definition or usage, you can make the Bible say anything you want. But when correctly interpreted the power and timelessness of God’s word speaks to the heart of us as people and as a nation. Never settle for less than what God’s word is really saying, its not just a mistake, it is foolish and robs us of the truth He meant for us to hear.