Misinterpreted, Misunderstood and Misapplied aka "You Got That Scripture Wrong" 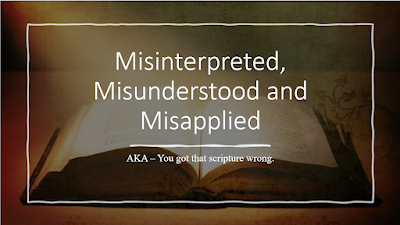 Introduction: We are going to start a new series tonight that build on our recent study of worship and in particular the rule of scripture interpretation aka hermeneutics.

The Command to Be Spirit Filled

Ephesians 5:18 And be not drunk with wine, wherein is excess; but be filled with the Spirit;
What does Paul mean when he commands the Ephesians to “be filled with the Spirit?” Is it a call for speaking in tongues, being healed or acting as though you are drunk and out of control? Or is it instead an aspect of the Christian life that Paul has been trying to instruct the Christians at Ephesus?

Let apply the rules of interpretation (hermeneutics) and see if we can’t come up with an interpretation of Ephesians 5:18 that will stay true to the message Paul originally sent to the church.
First lets quickly review the rules.

Rule of Definition: Follow the customary usage of language.
Know and use the plain meaning of the words as they were understood at the time of the writing.

Rule of Historical Background: Commit no historical-cultural blunders.
Interpret the Bible according to the time period and people it was originally written to. Do not impose a modern viewpoint on the people or culture. The Bible was first written over 6 thousand years ago to nomadic people who herded cattle. Before it was finished there were 40 authors, writing over 1500-year time span in three different languages, none of them English and the last book was written over 2000 years ago. You must know history, people and cultures or the meaning of the Bible will be lost to you.

Rule of Context: Always be conscious of the context of the passage.
This includes more than just the preceding verses. It also must consider the setting of the writing, the purpose of the letter or prophecy, who the writer was , and the readers they were writing to.

Rule of Focus:
Make Christ central in all interpretations. The Bible is the story, the revelation of the Godhead to us for the main purpose of revealing Jesus and salvation through Him. It contains other things like history, science, philosophy. Whatever it states is true when interpreted correctly, but it’s focus is Jesus. Do not lose sight of Him.

Rule of Unity: Interpret by the analogy of faith. Scripture should interpret scripture. Since the Bible is God’s word and God does not contradict Himself then neither will his word. The Bible cannot say two totally different things. Let the plain passages interpret those passages which are not clear.

Rule of Progressive of Revelation:
God has revealed more of His message and purpose to those people that were written to later than He revealed to the early audience. More revelation can be understand as it is built up the foundation of earlier revelation.

The Rule of Logic:
Hermeneutics is a set of rules that applies logic to the written word. It applies in all writings from the Bible to ancient history. Though the Bible is a spiritual book, it is not an illogical book. It deals with miracles and supernatural events but it does not divorce itself from the natural and logical settings of the writers. The interpretation must make sense.

(8 ½) Rule of Simplest Alternative.
When two passages seem to have equal weight in differing interpretations, always go with the simplest. The Bible was written to common people, not to theologians or philosophers. Complexity muddles the message, simplicity gives clarity.

To exegete a passage means we are going to interpret that passage using proper hermeneutics. The word comes from the Greek word which means to interpret and today is almost exclusively associated with scriptures from the Bible.

Lets begin with word meaning. “Be filled with the Spirit.” These words have not changed meaning since the KJV was translated. They very plainly state we should be filled with the Holy Spirit.
Nor is there insights to be gained in the Historical Background or culture of the time. Drinking wine and be drunk has the same meaning in Paul’s 1st Century culture as it does in ours today.
When we come to the rule of context, we begin to gain traction. To properly understand context we must ask not only what precedes these verses but why did Paul write them? What was his purpose in this command given here now?

Paul was writing to young Christians, mostly Gentiles that had been converted from paganism to Christianity. This letter was written to instruct them in how to live the Christian life. It begins as all of Paul’s letters with the doctrinal truth of what it meant to be a Christian and then it applies that truth to the way they live. Christianity was meant to be a “living out loud faith.” It is based on knowing the truth, but it does not remain in the domain of knowledge but must be translated into living and showing the truth.

Beginning in Ephesians 4:17 Paul describes the Christian way of living as walking. He gives several “walks” characterizing how the Ephesians were to live and show their relationship to Jesus. In Ephesians 4:17-24, he tells them to Walk as New Men. Ephesians 4:22–24 That ye put off concerning the former conversation the old man, which is corrupt according to the deceitful lusts;  And be renewed in the spirit of your mind; And that ye put on the new man, which after God is created in righteousness and true holiness.

Then Ephesians 4:25-31 He tells them to Walk in Right Relationship to others. Ephesians 4:31-32 Let all bitterness, and wrath, and anger, and clamour, and evil speaking, be put away from you, with all malice: And be ye kind one to another, tenderhearted, forgiving one another, even as God for Christ's sake hath forgiven you.

IN Ephesians 5:1-7  The Walk is one of love Ephesians 5:2 And walk in love, as Christ also hath loved us, and hath given himself for us an offering and a sacrifice to God for a sweetsmelling savour.
Ephesians 5:8-14 Teaches us to Walk in Light. Ephesians 5:8 For ye were sometimes darkness, but now are ye light in the Lord: walk as children of light:

And then the section our passage falls in Ephesians 5:5-21. Here Paul tells us and the Ephesians to Walk in Wisdom. Ephesians 5:15 See then that ye walk circumspectly, not as fools, but as wise.

A Rule for Wise Living

When Paul tells the Ephesians, “be not drunk with wine, wherein is excess; but be filled with the Spirit” He is giving an example of walking in wisdom, walking careful in this world. Being drunk with wine would not be wise, but being filled with the Holy Spirit is what a child of God should seek if they would be wise.

Warren Wiersbe says this about the passage, “Be filled with the Spirit” is God’s command, and He expects us to obey. The command is plural, so it applies to all Christians and not just to a select few. The verb is in the present tense—“keep on being filled”—so it is an experience we should enjoy constantly and not just on special occasions. And the verb is passive. We do not fill ourselves but permit the Spirit to fill us. The verb “fill” has nothing to do with contents or quantity, as though we are empty vessels that need a required amount of spiritual fuel to keep going. In the Bible, filled means “controlled by.” … To be “filled with the Spirit” means to be constantly controlled by the Spirit in our mind, emotions, and will. - Warren W. Wiersbe, The Bible Exposition Commentary, (Wheaton, IL: Victor Books, 1996), 2:48.

The Result of Being Filled

Paul contrasts drunkenness with the filling of the Holy Spirit because even though are opposites they have some things in common. Both actions are being controlled by something other than themselves and both are voluntary actions of the person involved. You don’t get drunk without choosing to and you don’t get filled with the Holy Spirit unless you submit to Him.

19 – 21 Paul then seems to give us three marks of the Spirit filled Christian in vss. Ephesians 5:19-21 Speaking to yourselves in psalms and hymns and spiritual songs, singing and making melody in your heart to the Lord;  20  Giving thanks always for all things unto God and the Father in the name of our Lord Jesus Christ;  Submitting yourselves one to another in the fear of God.

Vs. 19 The First Mark: The Spirit Filled are Psalms Singers. Speaking to yourselves means addressing one another, greeting one another. This is what you do when you all come together as members of the Lord’s body.  There should be Psalms, these are songs usually played along with a musical instrument.

Hymns comes from a Greek word that means to celebrate. Our idea of praise. There were also to be “making melody in your heart to the Lord.” This is still describing singing and praise but now it looks at the reason for singing, the attitude that truly is about showing the Christian life. Our praise should not be for outward show, not for others but and inward attitude expressed with others and for the Lord.
Vs. 20 Second Mark: The Spirit Filled are also to be “thanks givers. Ephesians 5:20 Giving thanks always for all things unto God and the Father in the name of our Lord Jesus Christ. The Wycliffe commentary said this about this phrase, “ Giving thanks always. No limit on the time. For all things. No limit on the extent.” No limit on how long we should give thanks and no limit on how much we should give thanks.

Vs. 21 Third Mark: The Spirit filled are self submitters. Ephesians 5:21 Submitting yourselves one to another in the fear of God. When you are filled with, controlled by the Holy Spirit you cannot see yourself as better than others, or more important than others. You can only see yourself and God sees you, a sinner saved by grace and equal to all other sinners needed grace.

I think that Paul wanted us to understand, that being filled is not something we can do in our own power, or force by some kind of manipulation or learn by some mystical initiation. Instead like most if not all of the Christian life, it is accomplished through simple, sincere yieldedness to God and His will. Like a vessel, empty yourself of the things of this world and then yield to God and let Him fill you with His Holy Spirit.