Life With Christ: Walking with Those Who Walked With Christ. Lesson 2 John The Baptist 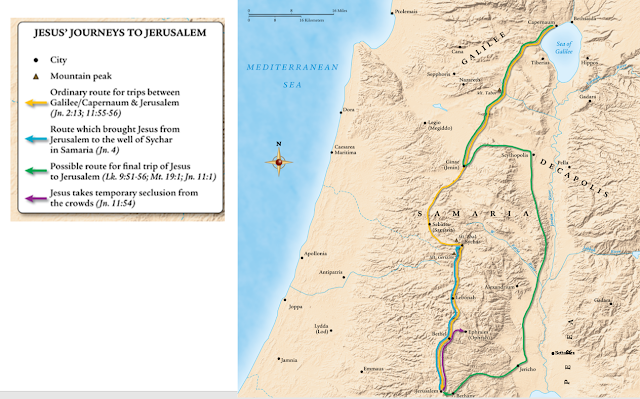 Harmony of the Gospel Passages

The Baptist's Imprisonment by Herod (In Machaerus, east of the Dead Sea) Luke 3:19-20,

Background:  Jesus and John the Baptist were first cousins by their mothers.  Elizabeth, John's mother and Mary, Jesus' mother were sisters.  The Bible records John leaping in his mother's womb when Elizabeth and Mary met while they were both with child. ( Lu 1:41,44 )  John must have been aware of his aunt's child even if they never met as children, though I believe it is very possible that they did, though not often.  At some point in his life probably about the age of 30 John left for the wilderness and took up the mantle as the last prophet of the Old Testament and the first of the new.  Some say he became an Essene, a group of  Jews which withdrew from society and studied the scriptures in preparation of the coming Messiah.  (This group wrote and hid the Dead Seas Scrolls.)  His job and name were given to him by God.  He was to prepare the nation of Israel for the appearance of the Messiah.  His ministry like Jesus was quite short, perhaps only a few months to a few years.  Jesus' public ministry began at His baptism by John, and his full disclosure to the nation of Israel began about the time John was throw into prison.

In verse 15 Jesus said, " Suffer it to be so now, for thus it becometh us to fulfill all righteousness."

What prompted him to say this?

Jesus was the Messiah, the one who he was sent to prepare the way.

John and Jesus but also as a general principle all those who follow God.

What was John's reaction to the statement?

What did Jesus mean then by it "becometh us to fulfill all righteousness?"

That there is no part of obedience or doctrine or truth that is not important. Baptism was the sign of those who would follow Messiah it wrong to deny is importance.

Do the words of Christ and his example of being baptized mean something to "us" today?

In vss. 16 and 17 notice the appearance of all three persons of the Godhead at this time.

Read vss. 16-17 Did anything ever occur like this before or after?

No only once in the sight of man is the Father, Son and Spirit seen.

What does this signify about this event?

What of  our own baptism?  How important is it in light of Christ statement and the appearance of the Trinity?

Why was "much water needed?"

Baptism was by immersion only.

Why were John's disciples asking this question?  What was happening to John's ministry and status? vs 25

It was dwindling down as Christ was rising up.

What did John's response reveal about himself  vs 27

He understood his place in the plan of God.

What was John's view of his role with Christ?  vs 29

He saw him as God as the one he served, the best man to the bridegroom.

Jesus was preeminent over all.

What was John's view of Christ's relationship with God? vs 32-35

He was sent from God, spoke for God and was equal to God

What was John's view of Christ relationship with us? vs 36

Eternal life was conditional upon belief in Jesus.

Is there any area of my life which I can rightfully say Christ should not be over?

What are some areas of life where Christ must increase and I must decrease?

Following John's example how can I make Christ over all in my life?  What did John understand that his disciples did not?

What quality or characteristic of John put him in prison?

Obedience to God’s principles and word at all cost.

How had John's understanding of God and of the Christ brought him to this moment?

He believed that his purpose in life was to prepare others for the kingdom of God, the coming of the Messiah. This was his role in the plan of God. He would not retreat from this even if it meant death.

Based on John's example, how should we regard or own calling by God?

How should we handle God's truth even if confronted by those who are negative to it?

For Further Study of John the Baptist.

Characteristics of John the Baptist

1.  What marked the beginning of Jesus' public ministry?

2.   How are the years of Jesus' earthly ministry labeled?

3.  John was also known as the forerunner because he did what?

4.  Why was Jesus baptized?

5.  Why should we be baptized?

6.  What event occurred at Jesus baptism that has never been seen before or since?

7.  What had upset John's disciples?

8.  What was John's view of himself in light of Jesus Christ?

10.  What was John's family relationship to Jesus?

Jesus was related to two of John the Baptist disciples, who later became Jesus' disciples who were they?

I believe we do not give enough time or honor to the life of John The Baptist. He was a prophet like no other before him and only the end of the age will see others fill the same role and even then will be seen in his shadow.

John’s message was fire, judgment, repentance and preparation. His preparing the way of the Lord resulted in thousand of people be receptive to the message of Jesus. His disciples were the first building blocks of Jesus church and the foundation of Christianity.

Yet for us, her and now, perhaps his most profound statement is what he said about himself and Jesus, “He must increase but I must decrease.” For John it was the reality of his life and calling, for us it must be our goal and life’s focus.