The Lord's Supper: Why you cannot change its purpose, elements or authority

The Lord's Supper
Why you cannot change its elements or authority. 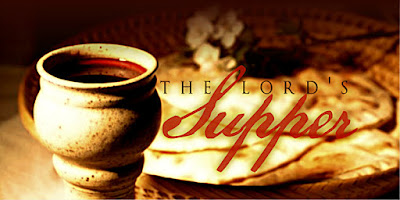 The Last Supper is so called because it was the last supper that Jesus would share with the apostles before his crucifixion. The meal they were sharing in the upper room that day was the Passover. Afterward, Jesus took some of the elements from the Old Testament memorial of Israel’s deliverance from Egyptian slavery and fashioned them into a New Testament memorial of our deliverance from sin.

Purpose: A Memorial Of The Lord’s Sacrifice

The first and primary purpose of the Lord’s Supper is that it would be a memorial of the death of Jesus Christ. The act of supper and the elements that make up the Supper are meant to be symbolic of the sinless sacrifice of Christ on Calvary’s tree for us. If we change the elements, then we also change the symbol. It is not proper, nor scriptural to eat any kind of bread or drink any liquid.  I once heard a prominent preacher tell how while on vacation he and his family decided to have the Lord’s supper at the beach. Since they had lacked the tradition bread and grape juice, they substituted hot dog buns and Pepsi. He thought it was a beautiful observation. I think it was an obvious sin.

The element of the bread for the first Christian Lord’s Supper was taken from the Passover meal, which the Lord had just shared with the apostles. That bread was unleavened, it was made without yeast. The Lord had specifically told the Israelites that yeast was forbidden, not just in the bread itself, but throughout the house where it was prepared and served. Yeast represented the sin of Egypt, which the children of Israel were to leave behind. Since the bread of the Lord’s supper represents Jesus, it must symbolize his life, lived without sin and then broken for us the only acceptable offering to God the Father as a substitute for us. Only unleavened bread can represent the sinlessness of Jesus Christ. If you change this you disregard the sacrifice of Jesus. You take the supper in an unworthy manner for it ignores the purpose of the memorial.

Hebrews 4:15 For we have not an high priest which cannot be touched with the feeling of our infirmities; but was in all points tempted like as we are, yet without sin.

The second element of the Supper is the fruit of the vine that represents His blood. As the grape is crushed and its juice runs forth so the life of Christ was crushed and His blood shed that we might find forgiveness, for without the shedding of blood is there no remission of sin. No other element is allowed, it must be the fruit of the vine, it must come from the grape. No matter how difficult it may be to obtain, you cannot substitute any other element. Only the grape portrays the shedding of Jesus precious blood for us.

Hebrews 9:22 And almost all things are by the law purged with blood; and without shedding of blood is no remission.

Purpose: To Examine Our Self and Our Relationship with Other Members

Another purpose of the Lord’s Supper is that is might serve as an opportunity for self-examination. The members of the church are to look into their own hearts and if there was a need for forgiveness, or confession that they would seek these before their participation in the memorial.

1 Corinthians 11:27-33 Wherefore whosoever shall eat this bread, and drink this cup of the Lord, unworthily, shall be guilty of the body and blood of the Lord. But let a man examine himself, and so let him eat of that bread, and drink of that cup. For he that eateth and drinketh unworthily, eateth and drinketh damnation to himself, not discerning the Lord's body. For this cause many are weak and sickly among you, and many sleep. For if we would judge ourselves, we should not be judged. But when we are judged, we are chastened of the Lord, that we should not be condemned with the world. Wherefore, my brethren, when ye come together to eat, tarry one for another.

Especially are the members of the church to examine themselves in their relationship to their brothers and sister in their local church, the body of Christ. The Lord's Supper provides a time and place in which all can come together in the unity and worship Jesus our Redeemer. If there is a problem or offense between members in the local congregation, then it should be dealt with before we come together in unity to focus on the gift of grace that united all of us in forgiveness with God the father.

We also must understand that the Lord’s Supper was meant for the members of that local congregation only. It is not open nor even close in its communion. It should only be administered under the authority of the local congregation to that congregations members in good standing. Here are the very Biblical reasons why this is plainly necessary.

First, It was given to a local congregation in the upper room after Judas had left, Jesus instituted the New Testament Supper to replace and supplant the Old Testament memorial of the Passover.

The apostle in that upper room were the members of that first church, founded by Jesus Christ during his earthly ministry. That first Lord’s supper was restricted to that first local church. There were many other saved during the Lord’s ministry and also in Jerusalem on that Passover but only the church He had started were brought to the table.

This is also part of partaking of the supper in a worthy manner. It is just as important as the elements which show Christ’s life and sacrifice. The supper loses its power and purpose, if there is no restriction to only the local congregation in right standing with the church. Notice what Paul wrote to the local church at Corinth which was guilt of not taking the Supper properly.

1Corinthians 5:11-13. But now I have written unto you not to keep company, if any man that is called a brother be a fornicator, or covetous, or an idolater, or a railer, or a drunkard, or an extortioner; with such an one no not to eat. For what have I to do to judge them also that are without? do not ye judge them that are within? But them that are without God judgeth. Therefore put away from among yourselves that wicked person.

Paul instructed the church not to eat, with one who was living in unrepentant, public sin. This disciple may have applied to all fellowship, but it would certainly apply to the Lord’s supper. With a one, no not to eat! The local church of Corinth was to exercise their authority, as the administer of the ordinance to restrict the unrepentant sinner from sharing in the unity of the Lord’s Supper.

For us today, there can be no unity with one who is in open sin, yet if the Lord's supper is not restricted to the local church this could very well be what we do. We cannot observe the commandment not to eat with such a one because we cannot know if a visitor is in open rebellion to the Lord, living in open sin or under discipline from their own local church. In fact, we cannot even know if they are saved since they are visitors to our service. We have no authority over member of other churches, therefore the only way to fulfill scripture is to exercise authority over the ordinance in our church. If we ignore this responsibility, then we are guilty of the same sin that plagued Corinthians when they came together for the Lord’s Supper.

1 Corinthians 11:17-19 17  Now in this that I declare unto you I praise you not, that ye come together not for the better, but for the worse. 18  For first of all, when ye come together in the church, I hear that there be divisions among you; and I partly believe it. 19  For there must be also heresies among you, that they which are approved may be made manifest among you.

Ignorance of scripture or the even worse, the desire to not offend others, is no excuse to neglect the scripture or the authority of the local church. Membership in the local church and the invitation to the ordinances is the church’s responsibility. The local body must determine the genuine confession of Christ and open the waters of Baptism. The church must judge who is fit to come to the table of communion and it must also restrict those who are not. We can only fulfill our duty with our own members, we have no authority over others, but we must exercise this authority in our own church, if we are to “show forth the Lord’s death” in a manner worthy of His sinless life and spilled out blood. Jesus saw to it that Judas was gone before the supper and we, as the body of Christ today, must do what is expected of us to see that those who come to the supper that memorializes Jesus death, come in reverence and a manner worthy of that sacrifice. Only the local church can do this, and the local church must do this.