Tabernacle Christians: Dwelling with God Lesson 1: Background of the Tabernacle

Lesson 1: Background of the Tabernacle 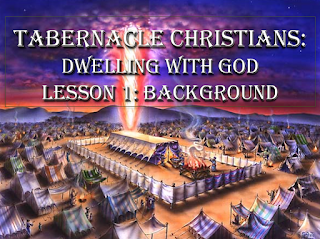 When God called Israel out of Egypt it was to take them to the land promised to Abraham their forefather. God wanted the descendants of Abraham to be His people, His desire was to form a relationship that was much closer than anything they had shared previously. Along the way to Canaan there would be extreme hardships, dangers and difficulties.  God's presence in the midst of his people was a necessity if their relationship would deepen and the difficulties overcome.

God led Moses to Mt. Sinai, here the law and the plans for the tabernacle were given.  The Tabernacle would be the place where the nation of Israel would meet with God while they traveled to Canaan.  God's power and presence could be felt and seen as the tribes camped around the tent of meeting, the Tabernacle became the focal point of their lives in union with their God.

The tabernacle was not just a beautiful tent, however, it was also a symbol of heaven where God dwells and of a relationship every believer shares through Jesus. Each piece of furniture, each covering and tapestry pointed to the Savior who would come and give his life to redeem all of mankind.

As a symbol of heaven the Tabernacle was God’s revelation to His people of His dwelling place and what would one day be our dwelling place. As a symbol of the coming Messiah, the tabernacle would be a prophecy of the coming Anointed One. It also stood as a picture of drawing nearer to God by passing from the outer court in the Tabernacle to the Most Holy Place. It it still has much to teach New Testament believers today. Each part of the tabernacle can be applied to our walk with Jesus, each room points to a deeper, more intimate relationship with God.

Background and Overview – Exodus Overview from the Bible Project

A Model for Heaven

Hebrews 9:24-24  It was therefore necessary that the patterns of things in the heavens should be purified with these; but the heavenly things themselves with better sacrifices than these. For Christ is not entered into the holy places made with hands, which are the figures of the true; but into heaven itself, now to appear in the presence of God for us:

Paul and the third Heaven

The Bible speaks of three heavens, the atmosphere of the earth, the heavens of the stars and planet outside of earth and the spiritual heaven where God dwells.  Related to the tabernacle then the outer court is earth, the inner court is space and the most holy place is where God sits on his throne. In Hebrews Paul says the tabernacle was a pattern or things in heaven, figures of the true. The Tabernacle gave Israel and now us a glimpse of Heaven and through its symbolism of God and the coming Saviour.

The Setting of the Old Testament Tabernacle

Let’s look at where and how the physical tabernacle was built. The tabernacle took about 8 months to build while the children of Israel were camped at the base of Mt. Sinai in the Wilderness. It was completed during the second year after they had left Egyptian captivity.

Exodus 40:17 And it came to pass in the first month in the second year, on the first day of the month, that the tabernacle was reared up.