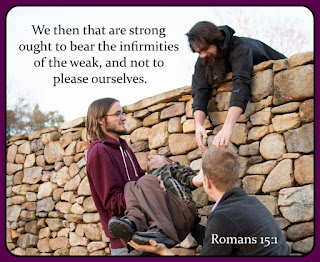 We then that are strong ought to bear the infirmities of the weak, and not to please ourselves.  Let every one of us please his neighbour for his good to edification.  For even Christ pleased not himself; but, as it is written, The reproaches of them that reproached thee fell on me.  For whatsoever things were written aforetime were written for our learning, that we through patience and comfort of the scriptures might have hope. Now the God of patience and consolation grant you to be likeminded one toward another according to Christ Jesus: That ye may with one mind and one mouth glorify God, even the Father of our Lord Jesus Christ.

Here is how Paul wraps this up We the strong are to lift up, edify and bear the weaknesses of our fellow family members in the Lord.

This is what Jesus did and we should be following his example. Vs. 3 For even Christ pleased not himself; but, as it is written, The reproaches of them that reproached thee fell on me.  Paul quotes Psalms 69:9, one of the most important Messianic Psalms. He wants us to realize that we wouldn’t be saved if Christ hadn’t taken on our weaknesses, our reproaches. who took on our sins and bore our weakness.

This word reproach, that I have always just read and not really thought about comes from the Greek word onedismoss and it comes close to the meaning of “dis” as used today. It means to upbraid, revile, cast in one's teeth, or we would say throw it in my face. Jesus bore the accusations, revilement and humiliation that comes from being reproached. He is our example and we can at least bear the minor differences that come from other people’s convictions of how they are trying to serve and honor God.

Then Paul gives a blessing and a prayer for the church in Rome because he knows this is not an easy undertaking. People feel strongly about out convictions, as they should but not in a way that hurts others and may destroy the church they all love.

Romans 15:5-6 Now the God of patience and consolation grant you to be likeminded one toward another according to Christ Jesus: 6  That ye may with one mind and one mouth glorify God, even the Father of our Lord Jesus Christ.

The ultimate purpose, that we with one mind and one mouth will glorify God.

(Stop your critical judging, Drop your hurtful debating and Roll into glorifying our great God.) After hearing that you now can see the difference between the inspiration of the Holy Spirit as seen in what Paul writes and all the rest of us. Yes, I find inspiration in a fire safety warning.

Let me conclude with a story about Charles Spurgeon, everyone loves a good Spurgeon story, especially preachers.

Charles Spurgeon had a friend, Joseph Parker. Park was not a Baptist but a Congregational preacher. The two of them were considered the most influential and popular preacher in London during the Victorian era.

Though they were friends a misunderstanding arose between them. Charles Spurgeon had a fiery temper and personality to match, while Joseph Parker was quiet; tending to be meek and mild-mannered. One day, Pastor Parker made a comment about the terribly poor condition of the children being admitted to Spurgeon’s orphanage. Spurgeon’s church, Metropolitan Tabernacle, had just taken up operations for an orphanage for abandoned boys. And Spurgeon’s great love was for “his” orphanages. Spurgeon gave away most of the money that he ever made to these orphanages, in todays money it would amount to tens of millions. On the day the conflict began, Parker said to some members of his church, “We ought to help Spurgeon with his orphanage, for there are times when the boys don’t have proper clothes, and I am sure they could use some food.”

However, one of the men standing there, twisting the truth, and reported to Spurgeon, that Parker had in fact, criticized the orphanage itself; telling Spurgeon that “Joseph Parker says the boys in your orphanage don’t have enough clothes to wear or sufficient food to eat.”

To Spurgeon this was like a knife in the back by someone he trusted as a friend.  The next Sunday Spurgeon got in the pulpit and blasted Parker not only for what he thought had been said but for other things like the fact that Parker attended plays.

Because Spurgeon was so well known and so popular all his sermons were reprinted in the London newspapers and now his attack against his friend Parker was know to all of England. Then a newspaper reporter raced over to Parker’s home and asked him whether he would reply to Spurgeon attack on the following Sunday. Parker thought for a moment and replied. “Yes, I will respond to him next Sunday.”

This great minister’s battle become the talk of London.  Bets were wagered at betting houses and among the lost. People, religious and not, talked and speculated back and forth about it all that week.

Understandably, huge throngs of people as well as a herd of newspaper reporters flocked to Parker’s church the next Sunday to hear the rebuttal. Hundreds were there when the doors opened. You could feel the high tension at the church service. The singing was strained. Everyone waited with bated breath And when it came time for Dr. Parker to speak, a hush fell upon the crowd.  The good pastor, slowly got up and went to the pulpit, quietly cleared his throat and said, “Brother Spurgeon is sick today and cannot preach. This is the day when he takes up an offering for his orphans. May I suggest that we take up that offering for him in our church, for he’s doing a great work, and I know all of us would like to have a part in it.”

Pastor Parker’s compassion stirred such a response that the deacons had to empty the offering plates three times. They bagged the money and took it over to Spurgeon after the service, commenting, “This is a gift from Joseph Parker. He really promoted your program in church today.”

On Tuesday morning there was a knock at Parker’s study.  It was Spurgeon. Throwing his arms around his nearly lost friend he said, “You have more of the spirit of Jesus Christ than any man I know. You know, Parker, you have practiced grace on me. You have given me not what I deserved, you have given me what I needed.”

Isn’t that what Jesus did for us? Isn’t that the least we can do for those who He died for, who is their Lord and who they will stand before one day just like us to be judged for the way they served and honored him. And you know what I think when it comes to that judgment of reward and lack of reward? I doubt seriously anyone will lose anything from their crown for wearing the wrong kind of clothes one Sunday or not celebrating Christmas but I know we will lose a part of our crown of life for driving brothers and sister from the house of God, because we couldn’t be the strong one, love them and lift them even in their weaknesses, just as Christ love and lifted us.