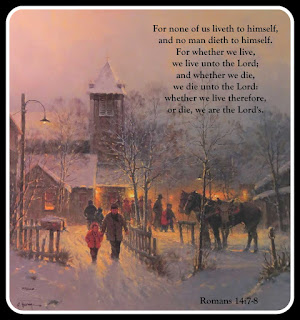 1  Him that is weak in the faith receive ye, but not to doubtful disputations. 2  For one believeth that he may eat all things: another, who is weak, eateth herbs. 3  Let not him that eateth despise him that eateth not; and let not him which eateth not judge him that eateth: for God hath received him. 4  Who art thou that judgest another man's servant? to his own master he standeth or falleth. Yea, he shall be holden up: for God is able to make him stand. 5  One man esteemeth one day above another: another esteemeth every day alike. Let every man be fully persuaded in his own mind. 6  He that regardeth the day, regardeth it unto the Lord; and he that regardeth not the day, to the Lord he doth not regard it. He that eateth, eateth to the Lord, for he giveth God thanks; and he that eateth not, to the Lord he eateth not, and giveth God thanks. 7  For none of us liveth to himself, and no man dieth to himself. 8  For whether we live, we live unto the Lord; and whether we die, we die unto the Lord: whether we live therefore, or die, we are the Lord's. 9  For to this end Christ both died, and rose, and revived, that he might be Lord both of the dead and living. 10  But why dost thou judge thy brother? or why dost thou set at nought thy brother? for we shall all stand before the judgment seat of Christ. 11  For it is written, As I live, saith the Lord, every knee shall bow to me, and every tongue shall confess to God. 12  So then every one of us shall give account of himself to God.

Paul writes to the Roman church about difference of conviction within the church body. Jewish believers who still practiced the festival and feast days were misunderstood by the Gentile Christians who had given up their pagan holidays. The Gentiles who saw no problem with eating meat with blood in it or eating other ceremonial unclean foods that were abhorrent to the Jews. This could cause real friction and even division within the church.

Paul tells them yes, accept into your church family those which may be weak, immature, in the faith but not for the purpose of getting into debates with them about the these differences of personal conviction. We could call them the gray areas of Christianity living.

Let me note here, that Paul’s admonition applies to those in the faith, those who are saved and in these areas of conviction he is going to talk about. Paul who had been stoned, persecuted, threatened and arrested because of his stand for the truth, would never compromise on the truth,  the Gospel, morality, or Biblical doctrine. One those things that God clearly states as right and wrong there is not compromise.

Yet there are areas of differences that the Bible does not expressly state it is as wrong and we had better understand the difference or we will destroy the church which is meant to be the pillar and ground of the truth.

Paul give four reasons why we should accept our brother and sisters in Christ in spite of their differing opinions and convictions in areas that are not clearly defined in Scripture as right or wrong.

God will sustain Them (v. 4). Who art thou that judgest another man's servant? to his own master he standeth or falleth. Yea, he shall be holden up: for God is able to make him stand

Jesus is their Lord (vv. 5-9). For to this end Christ both died, and rose, and revived, that he might be Lord both of the dead and living.

Jesus is their Judge (vv. 10-12). For it is written, As I live, saith the Lord, every knee shall bow to me, and every tongue shall confess to God. 12  So then every one of us shall give account of himself to God.

Paul's Examples Of Christian Convictions that are between the believer and his God.

vs. 2  Eating meat or just vegetables, “Let neither despise the other for God has received him. Both give thanks to God for whatever they eat.”

Vs 5    Special days and holy days. “5  One man esteemeth one day above another: another esteemeth every day alike. Let every man be fully persuaded in his own mind.”

Vs. 6 In both cases, Paul says, they are trying to honor the Lord in their convictions. The Jews who continued to keep the OT Holy Days and the Gentiles who had walked away from the pagan ones, the food the Jews wouldn’t touch and the blessing said over the Gentiles non-Levitical meal all were convinced they were doing it to honor the Lord and Savior.

Do I dare site some of the recent or even current areas of convictions we must can either be critical, convicted or caring about?

Makes you wish you could just go back to differences about food and holidays doesn’t it. There is a minefield of personal convictions out there and if we as a church are not very careful in how we deal with them, we will step up on them and blow up an entire church.

These all are in the category of the weak brother / sister principle.

They are not cardinal doctrines which deal with salvation, the ordinances or other areas that define Christianity.

They are not spelled out as definitely wrong in the Bible. They are differences of conviction among believers in the faith and usually in the same church. They are all things we must leave to our brother and sisters personal beliefs about how to serve and honor God and leave to the Lord’s judgement in the future.

Paul writing to the Corinthians

1 Corinthians 4:5 — Therefore judge nothing before the time, until the Lord come, who both will bring to light the hidden things of darkness, and will make manifest the counsels of the hearts: and then shall every man have praise of God.

2 Corinthians 5:10 — For we must all appear before the judgment seat of Christ; that every one may receive the things done in his body, according to that he hath done, whether it be good or bad.

Illustration: The Missionary that Left the Work

I once had a few conversations with an independent Baptist missionary who was on deputation while I was in school at Independent Baptist College. He told me of some of the difficulties he had encountered while on the road raised support. One pastor called him down from the pulpit because he had dared to wear cowboy boots on the speakers podium. Another had met him at the door and then led him to his office where he opened a drawer full of eyeglasses and told the missionary to pick a pair to replace the ones he was wearing because they were wire-rimmed glasses, the same kind that John Lenin and all those hippies wore.

You and I would probably find those things a little funny or quaint but years later I learned that the missionary who shared those things with me had finally grown tired of being beat up for being different and he quit trying to raise support, go to the mission field and preach the Gospel.

That is the danger of not understanding the principle of bearing one another’s convictions can do. If we are not caring instead of critical we will drive brothers and sisters who love the lord and want to serve Him in our church, right out that back door to another church or to the world. Most times they will never tell you why they left. Maybe you said something about long hair on one of their kids or kidded about the NIV or ESV translation they proudly carried into services that day. Its not that they were wrong or that you were right, it’s about critical sometimes bitter judging in the areas that Romans 14 says, you have no right to judge here.