Apocalypse: The Appearance of the Kings Lesson 6 - The Throne Room Rev 4-5


Apocalypse: The Appearance of the Kings 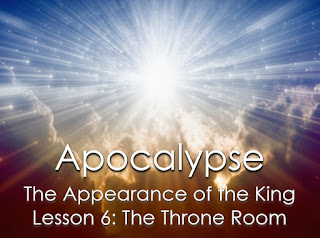 The church at the time of John’s book of Revelation was in a time of crises. The sign miracles like tongues, word of wisdom, word of knowledge were finished or fading. There had been no new word from God in over a generation. John the last apostle had been tortured and exiled to a deserted island probably to die. The Roman empire and the Jewish religious authorities were arresting and killing the leaders of the church.

In the midst of this hopeless, sin filled darkness a bright light, in the form of a letter, arrives. John the 99 year old apostle writes and tell the churches, “I have seen the Lord and He is coming back!”

In that letter John describes the greatest worship service that time and eternity has ever experienced as it takes place in the Throne Room of Heaven.

Through the letter we can participate in the worship. We can watch as the focus of John’s vision goes from himself in the midst of the throne room to the great scope of all creation.

This is one of the things that true worship does. Like John, we go from just seeing ourselves bowing before God, to all of creation and time falling before the Creator. Worship like this moves us from seeing just our own small portion of this world to catching a glimpse of God dwelling in all time and eternity.

Pay close attention to how God uses praise and song in this celestial worship celebration and how the focus of the narrative changes from person to person and from one to millions to all of creation.

Focus is on John

Revelation 4:1-2 After this I looked, and, behold, a door was opened in heaven: and the first voice which I heard was as it were of a trumpet talking with me; which said, Come up hither, and I will shew thee things which must be hereafter. And immediately I was in the spirit: and, behold, a throne was set in heaven, and one sat on the throne.

What could John himself be a symbol at this point?
The church being raptured into heaven before the Great Tribulation.

Focus is on God

What are the descriptive elements around the throne?

John sees One on the throne, like Jasper and Sardine stone,
He sees a rainbow about the throne, in appearance like an emerald.
There are twenty-four seats with twenty-four elders on them.
Out of the throne come lightnings, thunder and voices, seven lamps burning.
Before the throne is a sea of glass like crystal.
And in the midst of  the throne four beasts (living creatures) full of eyes before and behind.

What do each of these symbolize?

The one on the throne is God, the Father.
His appearance is like Jasper, clear like a diamond, Sardius is red, like a ruby.
The diamond represents purity, righteousness and the ruby represents blood and sacrifice.
These two stones were the first and last stones on the breastplate (Ephod) of the High Priest see Exodus 28:17-20.  The first represented Reuben whose name means "Behold a son." and the last represents Benjamin whose name means "Son of my right hand."
The rainbow represents grace and mercy as it did when God gave it after the flood.  The emerald color of the rainbow is the color of the tribe of Judah on the ephod, Judah's name means "praise." 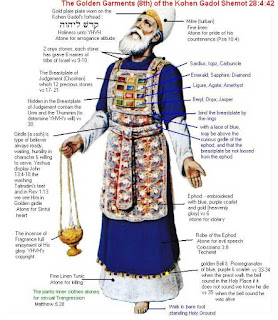 The seven lamps are the seven aspects of the fullness of the Holy Spirit which show God's omnipresence.

The sea of glass is reminiscent of the bronze laver which was in the tabernacle. see 1Chronicles 18:8.  The laver was used for cleansing and so the sea here represents purity of all those who are now in the presence of God.

Revelation 4:7-8 And the first beast was like a lion, and the second beast like a calf, and the third beast had a face as a man, and the fourth beast was like a flying eagle. And the four beasts had each of them six wings about him; and they were full of eyes within: and they rest not day and night, saying, Holy, holy, holy, Lord God Almighty, which was, and is, and is to come.

What is the purpose of the four living creatures?
To give praise, honor and glory to the One who sits on the throne.

What do they represent?
The full nature of God the Son.
Jesus is the King who is a servant and God who is also man.

We see the same four-fold picture in Revelation 4:7 where now we see a Lion (King) an Ox (servant) an Eagle (God) and a Man. The same picture is seen in Ezekiel 1:5-10, where Ezekiel the prophet is show the same scene in God's throne room as John. 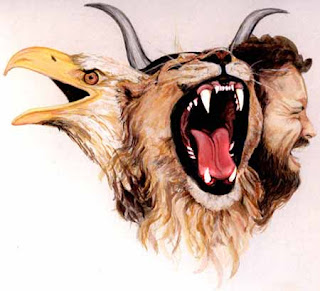 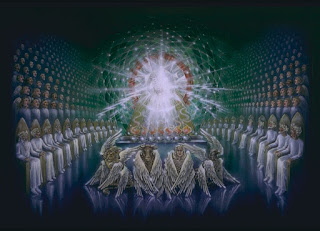 Focus is on the Elders

Revelation 4:9-11 And when those beasts give glory and honour and thanks to him that sat on the throne, who liveth for ever and ever,    The four and twenty elders fall down before him that sat on the throne, and worship him that liveth for ever and ever, and cast their crowns before the throne, saying, Thou art worthy, O Lord, to receive glory and honour and power: for thou hast created all things, and for thy pleasure they are and were created.

What is significant about the number 24?
There were 12 tribes of Israel and 12 apostles.
There were 24 courses or rotations of priest serving in the tabernacle

Where else have we seen the term elders?
The nation of Israel had elders as did the church.

What do the 24 elder represent?  All the saved of all time, both OT and NT.

Focus On The Book

Revelation 5:1-4  And I saw in the right hand of him that sat on the throne a book written within and on the backside, sealed with seven seals. And I saw a strong angel proclaiming with a loud voice, Who is worthy to open the book, and to loose the seals thereof? And no man in heaven, nor in earth, neither under the earth, was able to open the book, neither to look thereon. And I wept much, because no man was found worthy to open and to read the book, neither to look thereon. 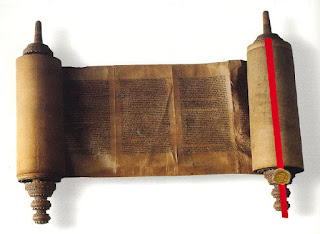 What is this book?
The sum history of all of God's dealing with Mankind, or the title deed to earth and all the people thereon.

Focus On The Lamb

Revelation 5:5-7 And one of the elders saith unto me, Weep not: behold, the Lion of the tribe of Juda, the Root of David, hath prevailed to open the book, and to loose the seven seals thereof.  And I beheld, and, lo, in the midst of the throne and of the four beasts, and in the midst of the elders, stood a Lamb as it had been slain, having seven horns and seven eyes, which are the seven Spirits of God sent forth into all the earth.  And he came and took the book out of the right hand of him that sat upon the throne.

Who is the lamb?
Jesus Christ,

Describe the lamb.
it had been slain
seven horns
seven eyes

What do these symbols reveal to us about Jesus?
His death and resurrection have made him worthy to claim and open the book.
Horns speak of power, Seven is the number of completeness, Eyes are said to be the seven Spirits of God which is the fullness of the Holy Spirit, especially his omnipresence.

Focus On The Songs

1st Song Rev 4:8-9
Four Living Creatures Song of God’s Holiness
And the four beasts had each of them six wings about him; and they were full of eyes within: and they rest not day and night, saying, Holy, holy, holy, Lord God Almighty, which was, and is, and is to come. And when those beasts give glory and honour and thanks to him that sat on the throne, who liveth for ever and ever,

2nd Song Rev 4:10-11
24 Elders Sing of God’s Power
The four and twenty elders fall down before him that sat on the throne, and worship him that liveth for ever and ever, and cast their crowns before the throne, saying, Thou art worthy, O Lord, to receive glory and honour and power: for thou hast created all things, and for thy pleasure they are and were created.

3rd Song Rev 5:8-10
28 Living Creatures and Elders Join to Sing to the Lamb of Redemption
And when he had taken the book, the four beasts and four and twenty elders fell down before the Lamb, having every one of them harps, and golden vials full of odours, which are the prayers of saints.  And they sung a new song, saying, Thou art worthy to take the book, and to open the seals thereof: for thou wast slain, and hast redeemed us to God by thy blood out of every kindred, and tongue, and people, and nation;   And hast made us unto our God kings and priests: and we shall reign on the earth.

4th Song Rev 5:11-12
100 million Living Creature, Elder and Angels sing “Worthy is the Lamb”
And I beheld, and I heard the voice of many angels round about the throne and the beasts and the elders: and the number of them was ten thousand times ten thousand, and thousands of thousands; saying with a loud voice, Worthy is the Lamb that was slain to receive power, and riches, and wisdom, and strength, and honour, and glory, and blessing.

5th Song Rev 5:13
All Creatures of Heaven and Earth sing Blessing, Honor, Glory and Power to God and the Lamb.

And every creature which is in heaven, and on the earth, and under the earth, and such as are in the sea, and all that are in them, heard I saying, Blessing, and honour, and glory, and power, be unto him that sitteth upon the throne, and unto the Lamb for ever and ever.

Conclusion of the Worship service

Revelation 5:14 And the four beasts said, Amen. And the four and twenty elders fell down and worshipped him that liveth for ever and ever.

The elders fall down, prostrating themselves before God and the Lamb. This is the final act of all true worship.