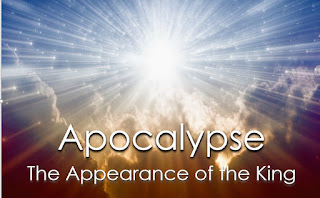 Christ Reveals Himself To Us

1 The Revelation of Jesus Christ, which God gave unto him, to shew unto his servants things which must shortly come to pass; and he sent and signified it by his angel unto his servant John: 2  Who bare record of the word of God, and of the testimony of Jesus Christ, and of all things that he saw.
(The Book of Revelation is the revelation, the revealing of Jesus Christ. It is not about revealing the future but it is about revealing the One who knows and directs the future. The Bible is His Story not just history and Revelation is about the coming King the future is merely the setting. )

3 ¶  Blessed is he that readeth, and they that hear the words of this prophecy, and keep those things which are written therein: for the time is at hand.
(We must ask ourselves how this statement was true in John's day and still true in ours. How can the time be at hand? The answer is not in the passing of years but in the passing of events. After the resurrection of Jesus and  His return all events have been fulfilled. The stop watch of God's prophecy, stopped at his death and resurrection can be restarted at anytime. It is as if we were all poised waiting only for God to say it is time, but all events foretold in Daniel 9 that preceded the final week are finished.)

Christ Gives Himself to Us

4  John to the seven churches which are in Asia: Grace be unto you, and peace, from him which is, and which was, and which is to come; and from the seven Spirits which are before his throne; 5 And from Jesus Christ, who is the faithful witness, and the first begotten of the dead, and the prince of the kings of the earth.

Notice the Titles given to Jesus:

John’s Prayer and Testimony of Christ 5b-7

5b  Unto him that loved us, and washed us from our sins in his own blood, 6  And hath made us kings and priests unto God and his Father; to him be glory and dominion for ever and ever. Amen. 7 Behold, he cometh with clouds; and every eye shall see him, and they also which pierced him: and all kindreds of the earth shall wail because of him. Even so, Amen.

Christ's Testimony of Himself

8  I am Alpha and Omega, the beginning and the ending, saith the Lord, which is, and which was, and which is to come, the Almighty.
(Here Jesus in no uncertain terms lays claim to His true nature as God the Son, eternal and omnipotent, very God of very God.)

9 I John, who also am your brother, and companion in tribulation, and in the kingdom and patience of Jesus Christ, was in the isle that is called Patmos, for the word of God, and for the testimony of Jesus Christ. 10  I was in the Spirit on the Lord’s day, and heard behind me a great voice, as of a trumpet, 11  Saying, I am Alpha and Omega, the first and the last: and, What thou seest, write in a book, and send it unto the seven churches which are in Asia; unto Ephesus, and unto Smyrna, and unto Pergamos, and unto Thyatira, and unto Sardis, and unto Philadelphia, and unto Laodicea.
John identifies himself, the location, the time and even the fact that he was worshipping on the Lord's Day which was Sunday the day Jesus was resurrected from the tomb. All of this shows that John wanted to establish the veracity of his vision.

John’s commission, “write what you see and publish it”, can be applied to us. What you see, what you know is true, remember and tell others.

Acts 1:8 But ye shall receive power, after that the Holy Ghost is come upon you: and ye shall be witnesses unto me both in Jerusalem, and in all Judaea, and in Samaria, and unto the uttermost part of the earth.

Christ Stands With Us

12  And I turned to see the voice that spake with me. And being turned, I saw seven golden candlesticks; 13  And in the midst of the seven candlesticks one like unto the Son of man, clothed with a garment down to the foot, and girt about the paps with a golden girdle. 14  His head and his hairs were white like wool, as white as snow; and his eyes were as a flame of fire; 15  And his feet like unto fine brass, as if they burned in a furnace; and his voice as the sound of many waters. 16  And he had in his right hand seven stars: and out of his mouth went a sharp twoedged sword: and his countenance was as the sun shineth in his strength.

(Candles didn't exist in John's day we would better see them as oil lamps.)

2) What does his appearance suggest to you?
His garment and hair are white which represents sinlessness and purity in the Bible.
His eyes life flame, his feet like brass just taken from the furnace, a sword coming from his mouth all suggest terrible, judgment and wrath.
His countenance like the sun shining in its strength suggests glory, righteousness and power.

4) What is the significance of the number seven?)
Seven throughout scripture represents completeness, maturity, perfection, examples 7 days in week, 70 weeks.

5) Who or what are the angels of the seven churches?
The word angel in the original Bible language of Greek simply means "messenger" and so you must draw a conclusion about their exact identity. Does each church have an heavenly messenger in its midst or is Jesus talking about holding the pastors of those churches in his hands? Personally, I believe it is pastors, but many others think heavenly angels and the Bible certainly has references to angels being in churches.

Christ Consoles and Inspires Us 17-20

Perhaps we as God’s people for this day and this age need what John needed as he struggled, alone and deserted on the barren island. We still need to see Jesus.
Jesus, risen and coming again.
Jesus, white in sinless perfection and purity.
Jesus, flaming in judgment against sin.
Jesus ,bright as the sun its strength, showing His glory and overcoming the deepest darkness.

Don’t skip the first chapter of Revelation, it may be the most needed chapter in the entire book for us right now, in our darkness and pain.