The Family, The Bible, The Battle #3 Wives and Mothers 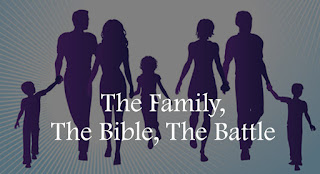 The wife must also be aware of the same four vital relationships.  These relationships with God, her husband, her children and herself are where she draws her nourishment for growth and her strength for trials.

You must be born again to go to heaven.
This new birth occurs when one believes on Jesus.
To believe means to trust him, cling to him and rely on him.

Included in the relationship to God is service.
Psalm 2:11 Serve the LORD with fear, and rejoice with trembling.

Relationship with your husband

The commitment to the relationship is measured by your willingness to submit to your husband as God designed.

Submission must be inward not just outward.
1 Peter 3:4-6  But let it be the hidden man of the heart, in that which is not corruptible, even the ornament of a meek and quiet spirit, which is in the sight of God of great price.  For after this manner in the old time the holy women also, who trusted in God, adorned themselves, being in subjection unto their own husbands:  Even as Sara obeyed Abraham, calling him lord: whose daughters ye are, as long as ye do well, and are not afraid with any amazement.

A submitted wife is not conquered but converted and convinced.

Self-fulfillment can only come through Jesus.
Philippians 4:13 I can do all things through Christ which strengtheneth me.

Only by relying on the Lord can anyone find real happiness.

A woman then can find true fulfillment in her family
Proverbs 31:15 She riseth also while it is yet night, and giveth meat to her household, and a portion to her maidens.

Proverbs 31:21 She is not afraid of the snow for her household: for all her household are clothed with scarlet.

Proverbs 31:26-27 She openeth her mouth with wisdom; and in her tongue is the law of kindness.  She looketh well to the ways of her household, and eateth not the bread of idleness.
A woman who is loved and appreciated by her family knows true fulfillment.

A woman can also find fulfillment in her work outside the home.

Proverbs 31:16-19 She considereth a field, and buyeth it: with the fruit of her hands she planteth a vineyard.  She girdeth her loins with strength, and strengtheneth her arms.  She perceiveth that her merchandise is good: her candle goeth not out by night.  She layeth her hands to the spindle, and her hands hold the distaff.

Proverbs 31:24 She maketh fine linen, and selleth it; and delivereth girdles unto the merchant.,

Proverbs 31:31 Give her of the fruit of her hands; and let her own works praise her in the gates.

Understanding the following priorities will give you the right balance in life and find satisfaction in your family, and work

As the women’s movement turned fanatical and ugly in the 1960s and 70s the focus began to shift from reform and equal opportunity. The feminist leaders – humorless, militant, pugnacious, and angry with their particular lot in life, launched programs that were anti-God, anti-capitalism, anti-family, anti-birth, anti-heterosexual and fostered a virulent hatred of anything having to do with males.

The radical, cultural Marxist feminist agenda, no longer wants to equalize the status of women, but instead is working to alienate women from men and destroy the family.
“The fiction of fatherhood is a giant religion called Christianity.” – Jill Johnston in Lesbian Nation

Home and traditional family values are no longer accepted answers to the questions, “Who am I?” and, “What am I here for?” The preeminent purpose for some women have become their careers and themselves rather than their families and others.

To accomplish their goals, organizations such as the National Organization for Women (NOW), Planned Parenthood, the National Education Association, and the People for the American Way, the Gay-Lesbian Caucus, etc. now advocate unrestrained sex, homosexual rights, abortion on demand, and transgender rights. While simultaneously they attacking all the Bible, the Church, Christian beliefs, conservative organizations, and all the traditional family structures.

Dissolving the Family
Betty Friedan, founder of NOW, referred to traditional family life as a “comfortable concentration camp” from which women needed liberation. Sheila Cronan, one of the feminist movements most respected leaders and spokeswomen said, “Since marriage constitutes slavery for women, it is clear that the women’s movement must concentrate on attacking marriage.”

Beginning in the 1960s and 1970s they launched an all-out assault on our nation’s time-honored laws protecting the marriage union. Divorce was presented as an easy way out for the frustrated, disappointed or adventuresome.

Within a few years, they succeeded in overturning all fifty of the nation’s “fault” divorce statutes and replacing them with what is called no-fault divorce. It was understood as an effort to secure for women the economic, political and social rights and protections that men have always enjoyed. A spate of pseudo-scientific studies assured parents that children were resilient and would recover quickly from the effects of divorce.

In their zeal they also stripped away from women, especially mothers with children, many of the economic and legal protections they had historically enjoyed in this nation, thus creating a whole new underclass in American society: the abandoned divorced woman.

The number of displaced homemakers rose twenty-eight percent between 1975 and 1983 to more than three million women. Another twenty percent increase from 1983 to 1988 brought that number to more than four million. An astonishing sixty-one percent of those women suddenly left alone had children under the age of ten at home. Often without job skills and stranded without alimony or child support, as many as seventy percent of these women make less than ten thousand dollars a year, and fifty percent are employed at minimum wage or less. It is, thus, readily apparent why a full seventy-five percent of all Americans living below the poverty line in the United States are women and their children. -Sylvia Ann Hewlett, A Lesser Life: The Myth of Women’s Liberation in America (New York: William Morrow, 1986)

Militant feminists searching for power found the absolute best way to exercise their control was in the area of reproduction. Abortion became the single greatest avenue for militant women to exercise their quest for power and advance their belief that men aren’t necessary. They don’t need men to be happy. They certainly don’t want males to be able to exercise any control over them. Abortion thus became the ultimate symbol of women’s emancipation from the power and influence of men. With men being precluded from the ultimate decision-making process regarding the future of life in the womb, they are reduced to their proper, inferior role, that of a sperm donor.