Galatians: In Defense of Grace #5, The Argument from the Nature of the Law


Galatians: In Defense of Grace #5, The Argument from the Nature of the Law 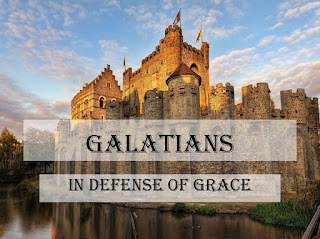 The Limited Ministry of the Law Galatians 3:19-24


What purpose then serveth the law? It was added because of transgressions, till the seed should come to whom the promise was made; and it was ordained by angels in the hand of a mediator. Now a mediator is not [a mediator] of one, but God is one.  Is the law then against the promises of God? By no means: for if there had been a law given which could have given life, verily righteousness should have been by the law.  But the scripture hath concluded all under sin, that the promise by faith of Jesus Christ might be given to them that believe. But before faith came, we were kept under the law, shut up to the faith which should afterwards be revealed. Therefore the law was our schoolmaster to bring us to Christ, that we might be justified by faith.

After destroying the argument that the law was permanent or greater than faith, Paul shows the reason why God gave the law.

Vs. 19 Why does Paul say the law was necessary?
Because of transgressions, sin. Sin in the world and in man made it necessary for law to be given until the seed, (Christ).

Vs. 20 Why does the presence of a mediator like Moses, show the law to be inferior to the covenant of Abraham which was of grace?
God and God alone was responsible for the covenant, while the law was between God and man. A contract that man would not be able to keep.

Vs. 21 Does this mean the law is against God’s promises? Is it opposed to grace?
God forbid (me ginomai: may it never be) If it had been possible for man to earn salvation it would have possible through the law.

Vs. 22 Why couldn't the law which was given by God, give eternal life?
It concluded (shut up, imprisoned) all under sin.

What was the purpose of all being concluded under sin?
That the promise by faith could by given to all that believe.

Vs. 23 In what way were Gentiles kept under the law and shut up to the faith?
All civilizations have laws which just as effectively do what the Jewish law did, showing all as being unable to keep it fully.

Vs. 24 Paul now uses a metaphor of a household slave, common to many during this time in history. How is the law like this slave that the KJV calls a schoolmaster?
This is actually a slave (paidagogos, boy leader)  which would walk the children to school, not the instructor but a guardian or one responsible for bring the child where they could learn.

According to Paul the law's purpose was to bring us to Christ, who is our instructor. What is the lesson that we learn?
We learn from Christ that justification is by grace through faith. The law cannot teach us grace it can only bring us to the One who can.

4:1 Now I say, That the heir, as long as he is a child, differeth nothing from a servant, though he is lord of all; But is under tutors and governors until the time appointed by the father. Even so we, when we were children, were in bondage under the elements of the world: But when the fulness of the time was come, God sent forth his Son, born of a woman, born under the law, To redeem them that were under the law, that we might receive the adoption of sons. And because ye are sons, God hath sent forth the Spirit of his Son into your hearts, crying, Abba, Father. Therefore thou art no more a servant, but a son; and if a son, then an heir of God through Christ.

3:25 What is the significance of "But after?"
Shows a transition from the past to the present, from being lost and under the law to be saved and free from the law.

List the elements of this new standing.
1. No longer under a schoolmaster
2. They are children of God by faith
3. They have put on Christ
4. They are all one in Christ
5. They are Abraham's seed, and heirs

Vs. 27 Explain the term, "baptized into Christ".
Water baptism is in view, the physical symbol which shows our joining with Christ by showing our submission and identification to his Death, burial and resurrection.

Vs. 28 What lines of distinctions are erased in Christ?  Spiritually all lines are gone.  There is no difference in sinners or in salvation no matter our nationality or our gender.

Are all distinctions or differences erased?
No, Paul is not talking about physical distinction or differences. The lines of distinction drawn by God’s creation of us are not removed.  Male is still male and female is still female.  Nor are our physical heritages somehow lost. This verse is dealing with salvation by grace and to try and make it about the physical is the opposite of what Paul was trying to show the Galatians who were being told that a physical mark was necessary upon their body to be saved.

Galatian 4:1-7 The Time Has Come To Be Sons
Vs. 1-2  Paul gives an illustration from life, an heir is treated as a child and even like a servant until the time the father sets.

Vs. 3-4 What is the comparison Paul makes?
When we were children, (lost and under governorship of the law) but God the Father’s appointed time has come.

Vs. 4 When was that appointed time?
When God sent forth his son, made in human flesh, made under the law to redeem us and that we might receive the adoption of sons.

Vs. 6-7. What is the gift of sonship?
The Sprit of His Son, in our hearts crying Abba, Father. We are no longer servants, but sons and heirs of God through Christ.


Summary of Paul’s argument about the law


In this part of Paul’s argument, he shows that the law was always inferior to God’s promise of salvation through faith. Why would they choose to be servants or slaves rather than heirs of God? The law could not save them only condemn them, it could not do that which God never intended it to do. The law brought them to see their need of Christ but only Christ could meet that need. By returning to the law, they were returning to the law’s condemnation.
May we never forget this same lesson. It is not what we can do that saves, keeps or empowers us but that which we believe of God’s promises through His Son. We are heirs of God not slaves, live that truth.
Posted by D. Kris Minefee at 9:31 AM