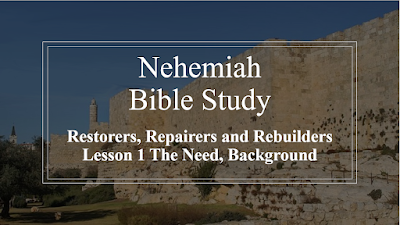 The story of Nehemiah, Ezra, Zerubbabel and Esther takes place after Israel had been punished by God for their years of idolatry by being taken into captivity around 605 BC.  The people have settled in new lands with only a few left behind in Canaan.  These few are content to let things continue as they are, there is no temple, there is no city wall, and Jerusalem had become a habitation of wild animals.  Yet in the midst of this waste God begins to raise up individuals to begin the task of rebuilding His house and His city.

Artaxerxes I, whom Nehemiah served as cupbearer, was the son of Ahasuerus (Xerxes), who took Esther to be his queen. In the spring of 457 B.C., Ezra led an expedition of Jews back to Jerusalem with the blessing of Artaxerxes; and by the following spring, he had completed the examination of those in Judea who had married foreign women.

One of the by-products of the revival under Ezra seems to have been an effort on the part of the Jews to rebuild the walls of Jerusalem. This in turn provoked the wrath of Rehum and Shimshai, who wrote an accusation against them to Artaxerxes (Ezr 4:7-16). The king commanded the work to cease until a further decree should be issued (Ezr 4:21). Rehum and Shimshai, upon receiving this decree from the king, hurried to Jerusalem and “made them to cease by force and power,” presumably breaking down the wall that had been started and burning the gates (Ezr 4:23; Neh 1:3). It was the news of this fresh disaster that shocked Nehemiah and brought him to his knees before God.

The Book of Nehemiah covers a period of at least twenty years, from December, 445 B.C., to about 425 B.C., when Nehemiah returned from Babylon to cleanse Jerusalem, and the province, of various evils that had crept in during his absence since 432 B.C. The careers of Ezra and Nehemiah overlap, as may be seen in Neh 8:1-9 and 12:26. – Wycliffe Bible Commentary

Who's Who in the Exile

Jehoiachin. Exiled from Jerusalem at 18, having ruled 3 months. Probably kept under house arrest until 37 years later given a place of honour in the royal court. Seen as important figure by the Jewish exiles. Probably died during the exile (2 Kings 24:1-15; 25:27).

Daniel. Exiled with King Jehoiachin. Selected for training to serve in the royal court of Babylon. Daniel rose to become head of the royal advisers. Later in the exile, he was put in charge of all the Empire's governors. Some traditions say he returned to Jerusalem at the end of exile.

Ezekiel. Exiled with King Jehoiachin. He prophesied the destruction of Jerusalem, and later, that the exiles would return to Jerusalem with its rebuilt temple. Probably died before the end of exile.

Esther and Mordecai. Esther became queen to Xerxes, the Persian emperor, not long before the return of Nehemiah to Jerusalem. With her cousin Mordecai, she prevented the persecution of Jews throughout the Persian Empire. Mordecai became a powerful figure in Xerxes' court.

Jeremiah. Forced to go to Egypt at the start of Judah's exile by a group who fled after killing the Babylonian governor of Judah. He spent the rest of his life in Egypt (Jeremiah 43).

Ezra. A high official in the Persian Empire—'minister for Jewish affairs.' In 457 BC, Emperor Artaxerxes I sent him to Jerusalem to reform the people there in accordance with Jewish Law. He led the fourth group of exiles home (Ezra 7).

Nehemiah. Cupbearer to Artaxerxes I, Nehemiah was sent by the emperor in 445 BC to rebuild the walls of Jerusalem. He led the third group of exiles home (Nehemiah 1).

Ordinary people. Many Jews in the exile became prosperous (see Ezra 2:68-69). Living in ghettos in Babylon and other places, they stayed together. But despite their wealth they despaired at the loss of their land and heritage.

Psalm 137 The Song of the Exiles

By the rivers of Babylon, there we sat down, yea, we wept, when we remembered Zion.
We hanged our harps upon the willows in the midst thereof.
For there they that carried us away captive required of us a song;
and they that wasted us required of us mirth, saying, Sing us one of the songs of Zion.
How shall we sing the LORD's song in a strange land?
If I forget thee, O Jerusalem,let my right hand forget her cunning.
If I do not remember thee,let my tongue cleave to the roof of my mouth; if I prefer not Jerusalem above my chief joy.
Remember, O LORD, the children of Edom in the day of Jerusalem;
who said, Rase it, rase it, even to the foundation thereof.
O daughter of Babylon, who art to be destroyed;
happy shall he be, that rewardeth thee as thou hast served us.
Happy shall he be, that taketh and dasheth thy little ones against the stones.

Four major returns to Israel from the lands of captivity.

In 539 BC the Babylonian Empire was taken over by Cyrus, the Persian king. He issued commands that all the displaced exiles should return home to worship their own gods. The exiles were free to return to Judah.

Sheshbazzar, a Jewish exile, is made governor of Judah, 537 BC. He is given the temple treasures taken by Nebuchadnezzar and returns to Judah with a group of exiles (Ezra 1).

Zerubbabel (grandson of King Jehoiachin) and Joshua, a priest, lead around 50,000 home in 525 BC.

Nehemiah, cupbearer in the Persian court to King Artaxerxes I, is sent to Jerusalem in 445 BC to repair Jerusalem's walls. An armed guard escorts him (Nehemiah 1–2).

Ezra, a scholar and Jewish priest, is given royal authority to renew the religious practices of Jerusalem. He leads exiles home in 457 BC (Ezra 7:1-10).

The third group of exiles to return from Babylon to the old homeland was under the general direction of a layman known as Nehemiah.  He apparently came from a well-to-do family of Jews living in Susa or Shushan.  He rose to the high position of cup-bearer of the Artaxerxes, king of Persia.  This influential position was also highly lucrative.  Nehemiah doubtless was an able and distinguished man since every experience of his and all the references to him indicate distinction.  He was also a man of genuine piety and of unquestioned loyalty to his people.  His brother, Hanani, brought to him at Susa the distressing news of the needy condition of his people back in Jerusalem.  The city was defenseless, the walls had never been repaired and the people were at the mercy of their enemies about them.  This news depressed the spirit of Nehemiah to the extent that his very countenance revealed his anxiety and distress.  The king, noting his distress, inquired the reason for it.  Nehemiah then told his story and expressed his desire to visit the city and assist his people in their need.

The king graciously expressed his sympathetic interest by giving Nehemiah leave of absence to go to Jerusalem and in addition provided passports and letters to officials in Palestine.  He provided him also with a royal escort and with authority to secure materials for rebuilding the walls of Jerusalem.  Thus it was that Nehemiah made the first of his long journeys of a thousand mile to the homeland of the Jews.  - from “The Heart of Hebrew History” by H.I. Hester.

God’s restoration of His people to the promised land took years and required both a physical and a spiritual return. Leaders like Zerubbabel, Joshua, Ezra and Nehemiah were chosen to complete those returns.
Over the next few week, we will be closely observing the man Nehemiah and the means and methods he used in order to rebuild the wall in troublesome times. It is our aim to apply the character, work ethic and methods that he used in rebuilding our lives, families, churches, communities and God willing our nation.