Walking With Christ: Lesson 6 The Woman brought before Christ, the Adulteress.

Walking With Christ: Lesson 6 The Woman brought before Christ, the Adulteress 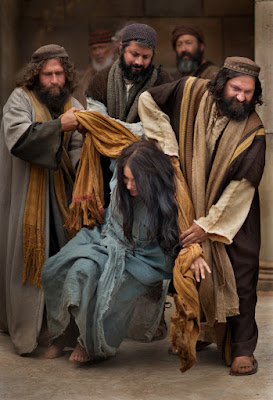 3.   Jesus in the wilderness tempted by Satan 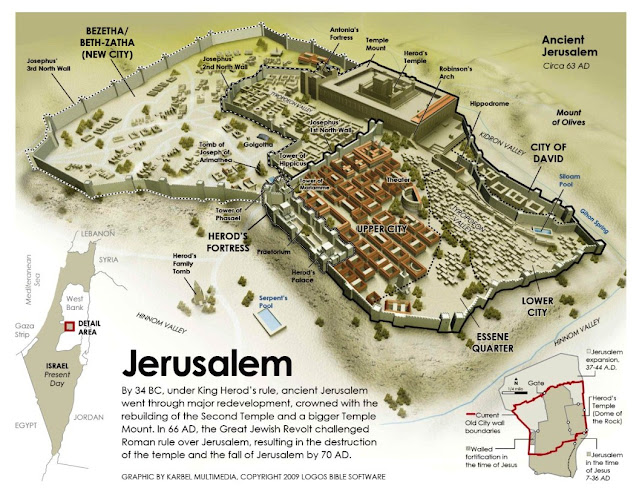 Story only found in John's account of the Gospel.

Jesus has now been preaching publicly for about 3 years.  Opposition from the recognized religious leaders of that day has been growing steadily.  At every opportunity when Jesus was in Jerusalem teaching they would try to debate him. One the day previous to John 8, Jesus had called out in the Temple at the height of the Feast of Tabernacles in John 7:37–38, “In the last day, that great day of the feast, Jesus stood and cried, saying, If any man thirst, let him come unto me, and drink.  He that believeth on me, as the scripture hath said, out of his belly shall flow rivers of living water.” This was a obvious declaration of himself as a prophet sent from God, in the same vein as Moses and many would see Him as “the prophet, that Moses foretold and the Messiah.

Such a declaration meant the Pharisees must act more decisively. The story of John 8 is their first attempt to try and trap him. They tried to present a problem or a situation in which Jesus would "hang Himself."  The lesson for today was just such a situation.  The woman should die according to Jewish law, but no Jew or Jewish authority had authority under Roman law to pronounce capital punishment. For the Pharisees it was a "win-win" outcome.  If Jesus said she shouldn't be killed, they would accuse him of rejecting the scripture.  If He condemned her to death then they would go to the Romans and accuse Jesus of plotting a rebellion. No matter what he did this looked like a trap that even Jesus couldn’t get out of.

John 8:4 They say unto him, Master, this woman was taken in adultery, in the very act.

What is suspicious or wrong about the woman being brought in by herself?

If she was caught “in the act” where was the man?  The man may have been the bait in this trap for he was not accused or brought.

John 8:6 This they said, tempting him, that they might have to accuse him. But Jesus stooped down, and with his finger wrote on the ground, as though he heard them not.

Why do you think Jesus did not answer but wrote upon the ground?

Perhaps to pray or think about his answer or to defuse the situation.

John 8:7 So when they continued asking him, he lifted up himself, and said unto them, He that is without sin among you, let him first cast a stone at her.

The answer shows an understanding of all being condemned by sin, this one just happened to be adultery.  Yet He did not reject the penalty for the sin.

Romans 3:23 For all have sinned and come short of the glory of God.

John 8:9 And they which heard it, being convicted by their own conscience, went out one by one, beginning at the eldest, even unto the last: and Jesus was left alone, and the woman standing in the midst.

Why did the accusers leave?  And what was interesting about the order in which they left?

They were convicted by their own conscience. The older ones realized through their experiences what was happening. The young tend to be more zealous and self-righteous.

John 8:10 When Jesus had lifted up himself, and saw none but the woman, he said unto her, Woman, where are those thine accusers? hath no man condemned thee?

What do we see in Jesus by His personally talking to this woman?

He did not reject her, the sinner, because of her sin.

What does vs. 11 reveal about who Jesus truly was?

Jesus, as sinless and as God, was the only one who could condemn her. It also reveals His love and willingness to forgive.

What can I learn by Jesus waiting before answering the Pharisees?

Many times, my answers need to thought over and prayed over.  The quickest answer is not always the most beneficial.

Where does the burden, the source of sin always lie?

Sin is always a personal matter between myself and the Lord.  Just as we saw in these men.  Sin can be seen in others but they will not accept my judgement until they are convicted in their own hearts of sin.  This is the work of the Holy Spirit.

John 16:7–11 Nevertheless I tell you the truth; It is expedient for you that I go away: for if I go not away, the Comforter will not come unto you; but if I depart, I will send him unto you. And when he is come, he will reprove the world of sin, and of righteousness, and of judgment: Of sin, because they believe not on me; Of righteousness, because I go to my Father, and ye see me no more;  Of judgment, because the prince of this world is judged.

Using Jesus as our example, how should we act and talk with sinners about salvation.

There must be compassion as well as conviction. There is the offer of forgiveness but at the same time the warning of punishment cannot be ignored. Both sides of salvation or condemnation must be viewed.

In talking to others about Jesus, should I ignore their sin or the penalty for that sin?  On the other hand can I ignore the sinner because of the severity or type of the sin?

I must fully see both the sin and their sin.  Neither can be allowed to overshadow my responsibility to share the Gospel.

Who is the only one who can forgive sin?  Who must the lost be brought to?

Jesus is the only one who can give forgiveness. The focus must be upon Him and who He is.

Was this woman saved?  Should Jesus have pushed for a profession?

We don't know if she was saved.  There is not enough given here to make a judgement. Jesus let the woman go, as he did the blind man he had healed without even telling him his name. Jesus was content and trusted His Father, to time to plant the seed and wait for the harvest.

What event occurred at Jesus baptism that has never been seen before or since?

Why did Nicodemus come by night?

Why was Jesus led into the wilderness?

What is a possible reason the woman of Sychar came so late to draw water?

What was living water?

What are some practical lessons I can learn from John 4?

How do you worship in "spirit and in truth."

How is Jesus' treatment of the adulterous woman an example of loving the sinner but hating the sin?

What was the danger posed by any answer Jesus gave to the Pharisees concerning this woman?

Why were the Pharisees, Sadducees and Scribes so opposed to Jesus?