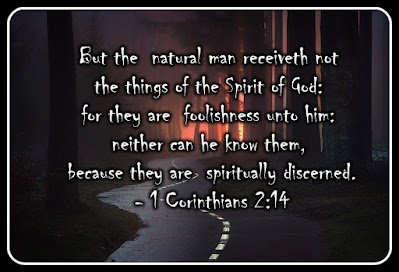 1 Corinthians 2:9-14 But as it is written, Eye hath not seen, nor ear heard, neither have entered into the heart of man, the things which God hath prepared for them that love him. 10 But God hath revealed them unto us by his Spirit: for the Spirit searcheth all things, yea, the deep things of God. 11 For what man knoweth the things of a man, save the spirit of man which is in him? even so the things of God knoweth no man, but the Spirit of God.  2 Now we have received, not the spirit of the world, but the spirit which is of God; that we might know the things that are freely given to us of God.  13 Which things also we speak, not in the words which man's wisdom teacheth, but which the Holy Ghost teacheth; comparing spiritual things with spiritual.  14 But the natural man receiveth not the things of the Spirit of God: for they are foolishness unto him: neither can he know them, because they are spiritually discerned.

Paul begins this section by telling the Corinthians that should understand they mystery, the hidden things he is going to teach them because they are from God and they are received by those who have the Spirit of God in them. He says the natural man, the unsaved man can’t see, hear or receive these things but the Corinthians can because they have received not the spirit of the world, but the spirit of God, for the purpose of knowing the thing that are freely given to us of God. He says the natural man cannot received these things because they are spiritually discerned and the natural man does not have the Holy Spirit to teach him.

The first spiritual state that Paul presents here is the natural man. The natural man is a man without Christ as his savior; without God as his father and without the Holy Spirit as his comforter, guide and teacher.

The Natural man is a lost sinner, his sin has separated him from God.

John 8:44-45 Ye are of your father the devil, and the lusts of your father ye will do. He was a murderer from the beginning, and abode not in the truth, because there is no truth in him. When he speaketh a lie, he speaketh of his own: for he is a liar, and the father of it. And because I tell you the truth, ye believe me not.

The Natural man the Bible tells us is destined for eternal punishment in the Lake of Fire.

We were all at one time lost, natural ones, but if we have accepted Christ as our savior, believed his words, accepted the truth of his death for us and repented of my sins then I am no longer. I have been delivered from this spiritual dead state.

Thank God, because the natural man receives nothing from the Spirit. No forgiveness, no guidance, no sealing, no indwelling, no quickening, no eternal life and no hope. As Paul said, “1 Corinthians 2:9   Eye hath not seen, nor ear heard, neither have entered into the heart of man, the things which God hath prepared for them that love him.”

The natural man, the lost man, the unsaved will never know or experience the wonders, blessings and joy that God has prepared for those who love him.