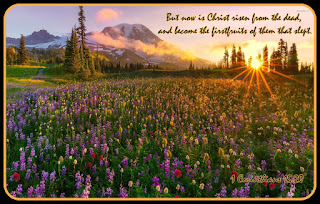 1 Corinthians 15:19-22 If in this life only we have hope in Christ, we are of all men most miserable.  But now is Christ risen from the dead, and become the firstfruits of them that slept.  For since by man came death, by man came also the resurrection of the dead.  For as in Adam all die, even so in Christ shall all be made alive.

It has been a month since we have been able to meet together in our church building. A month since we’ve come together as brothers and sisters in Christ and members of the Calvary Baptist Church family. As of this morning there have been 1,792,732 case of coronavirus worldwide, and 109,782 deaths. There have been 20,000 deaths in the United States and over 250 in Texas. Henderson couny now has at least 10 cases but so far, no deaths. Our economy has ground to a standstill, unemployment which was at an all-time low is now close to 10%. We are shut-down in our jobs and shut-in our homes and all we hear or read about is conflicting stories about who is to blame and what does or doesn’t work to cure the virus.

It is easy to lose hope in conditions like these. People without hope and under the stress of a stay at home orders have killed themselves and, in some cases, killed others. When you lose sight of the hope of tomorrow, then all you can see is the darkness of today and that darkness can be overwhelming.

Let me tell you a favorite Easter story.

During the Napoleonic Wars of the late 1700s, as the undefeatable armies of Napoleon marched throughout Europe conquering nation after nation and bringing the horrors of war, rape and scaricity on the world, hope was an easy thing to lose sight of. The French had gone through a revolution that throughout God and churches and replaced them with the rule of the mob and the worship of their Emporer. In his name they swept from France to conquer and dominate the world

In 1799, one of those armies with 18000 men, under the ruthless Commander Massena suddenly appeared on the heights above the small Austrian town of Feldkirch. It was Easter Sunday, and the rays of the rising sun reflected on the polished uniforms, cannons, rifles and bayonets the French soldiers, as they drew up on the hills to the west of the town. The town leaders were hastily called together to consult what was to be done. They had no army and they could not defend their town.

After much discussion, the old Pastor of the Town Church rose and said, "My brothers, it is Easter Day! We have been reckoning our own strength, and that fails. Let us turn to God. Ring the bells and have services. We must leave the matter in God’s hands." They agreed to do as he said. Then from the church towers in Feldkirch there rang out joyous peals from the bells in the lasting hope of the Resurrection. The streets then began to fill with worshipers hastening to the house of God.

The French Commander upon the hills, heard the sudden ringing of the bells and could not understand why the town was celebrating. They had discarded Easter and Christianity. No know what was happening the officers concluded that the Austrian army was coming to defend the town. Massena suddenly broke camp, gave the order to march, and before the bells had ceased ringing not an invading Frenchman was anywhere to be seen.—Walter Baxendale

I love that story and almost every Easter I pull my notes together and my past sermons about the Resurrection and that story is there. I read it again this year and thought what a picture of hope overcoming fear and defeat. What a great reminder of the power of faith in the resurrection to overcome hopelessness. In a sense today we are like that town, wondering what to do as we hunker down in our homes and try to avoid an undefeatable, invisible enemy. How do you overcome such an enemy? With the Hope of the Resurrection.

The Hope of The Resurrection

Turn to 1 Corinthians 15:19-22 If in this life only we have hope in Christ, we are of all men most miserable.  But now is Christ risen from the dead, and become the firstfruits of them that slept.  For since by man came death, by man came also the resurrection of the dead.  For as in Adam all die, even so in Christ shall all be made alive.

Paul in writing to the church in Corinth, it had many issues that must be dealt with, immorality and division among the members, the misuse and misunderstanding of tongues and one of the worst problems, the fatal flaw of denying the resurrection.

It seems there were teachers there who said that believing in Jesus was great. Yes, Jesus was a great teacher. He was a great leader. He taught a new way of living and seeing life. They also seemed to teach that even though we believed in Him, we would not be resurrected like He was. They may have denied all the resurrection, or they may have taught that only the soul is resurrected while the body stays in the grave, but whatever they taught, Paul rebuked them and then showed the danger of such a belief.

“If in this life only we have hope in Christ, we are of all men most miserable.”  He tells the church that to not believe in the resurrection, to only have hope in this life means we are the most deceived,  most misled, and the most miserable people of all. False hope is worse than no hope and if there is no resurrection then everything we trust in, everything we believe is a lie. And there are no more worthless faiths than those based upon lies.

Illustration: The health and wealth, fake faith healer and charlatan, Kenneth Copeland this week said that God had given him power over the Pandemic, the power to blow away the virus like a heat wave. Which he then demonstrated on nationwide TV and the internet.  There are poor misled, deceived people that believe fools like Copeland and to those people Paul’s words apply doubly, they are most miserable, because they have hope in a lie and in a liar.

That is not the kind of hope Paul is talking about in 1 Cor 15.

He goes on, “But now is Christ risen from the dead, and become the firstfruits of them that slept.

No matter how dark it may be around us, we have hope in the brightness of tomorrow because Jesus rose from the gave and promised us that we also would rise.

Do you remember the story of Jesus on his way to raise Lazarus from the tomb. It in John 11:25-27 In it is one of the strongest declarations of the power of Jesus over death and the grave.
John 11:25-27 Jesus (talking to Martha) said unto her, I am the resurrection, and the life: he that believeth in me, though he were dead, yet shall he live:  And whosoever liveth and believeth in me shall never die. Believest thou this?  She saith unto him, Yea, Lord: I believe that thou art the Christ, the Son of God…

Lazarus was dead in the tomb and all were weeping and in sorrow but Jesus was coming and the power of the resurrection was coming with Him.

Illustration D.L Moody as a young preacher had to preach his first funeral, He hunted all throughout the four Gospels trying to find one of Christ's funeral sermons but could not find a single word spoken of my Jesus at a funeral. Instead what he found was that Christ broke up every funeral he ever attended. Death could not exist where Jesus stood. When the dead heard the voice of Jesus they sprang to life. Jairus daughter was not dead she was only asleep. Jesus walked up to a funeral procession coming from the city of Nain, saw the tears of a broken hearted mother who had lost her son and he spoke life and hope and He brought that boy home to his mother.

Death and darkness cannot survive whenever Jesus comes. And when he comes he brings that same hope with him to us.

In Christ All Made Alive

Paul now completes his proof by showing that in the same way Adam’s sin brought death to mankind, Jesus resurrected life will bring life to mankind. Back in 1 Corinthians 15:21-22 For since by man came death, by man came also the resurrection of the dead. For as in Adam all die, even so in Christ shall all be made alive.”

By the proof of the resurrection we know that the sin and death of Adam has been defeated. Adam’s sin brought death and hopelessness, but Jesus life and resurrection brings the hope that overcomes darkness and death.

The book of Psalms is filled with songs about the power of hope in God.
Three times, in Psalms 42:5, 42:11 and 43:5 the almost exactly same verse is written.
Why art thou cast down, O my soul? and why art thou disquieted in me? hope thou in God: for I shall yet praise him for the help of his countenance.

How important is that truth, if it is repeated so clearly and so strongly in such close proximity to the other verses. It is a message that the Psalmist and those who put those Psalms in that order wanted us to hear.

Hope In God! For I shall yet praise Him!

I read so many verses on hope in preparing for this message, I have to share just a few from Romans with you.

Romans 4:18  Who against hope believed in hope,
Romans 5:2  ..rejoice in hope of the glory of God.
Romans 5:5  … hope maketh not ashamed;
Romans 8:24  …we are saved by hope..
Romans 12:12  Rejoicing in hope…
Romans 15:4  For whatsoever things were written aforetime were written for our learning, that we through patience and comfort of the scriptures might have hope.

Hope is built upon the foundation of the resurrection of Jesus Our Lord and Savior. We believe that He died for us, was buried in the tomb and then 3 days later overcome sin and death and rose from the Dead, victorious. That is historical and Biblical fact and one day He will call forth our bodies from the grave, this is future and Biblical hope. And in that hope, there is power for today and every day.

I feel within me that future life. I am like a forest that has been razed; the new shoots are stronger and brighter. I shall most certainly rise toward the heavens--the nearer my approach to the end, the plainer is the sound of immortal symphonies of worlds which invite me. …When I go to the grave I can say, as others have said, "My day's work is done." But I cannot say, "My life is done." My work will recommence the next morning. The tomb is not a blind alley; it is a thoroughfare. It closes upon the twilight but opens upon the dawn. -Victor Hugo

As we leave our first and I hope last Drive-In service, I pray you have and hold on to the power of hope. A hope that is built not upon wishes and whims but upon fact and faith. The fact of the resurrection of Jesus Christ and the faith of our own resurrection in Him one day.
Posted by D. Kris Minefee at 10:37 AM