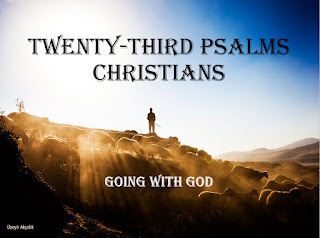 In this study of the 23rd Psalms we will journey with the shepherd as he leads us from green pastures and still waters through valleys of death and finally to the house of the Lord forever.  In this journey we will learn the lessons of that David learned as a shepherd leading his own sheep and as a sheep himself following God his shepherd.  In only six verses can be seen the cycle of the seasons and ultimately of life for a shepherd and his flock. In this cycle I will also see the seasons of my spiritual life and if I can follow and learn, I will be able to say with David, "I will not want, I will not fear and I will dwell forever in God's house."

We are first introduced to David the future King of Israel as a young boy, the least of all his brothers, tending his father Jesse's sheep. When Samuel came to anoint the next king, David is so unimportant in the eyes of those around him that he is not even summoned to the meeting with the judge, priest and prophet of Israel.

Perhaps it is the experience of being a shepherd that helped to make David the great king he would become.  In the writing of the most famous Psalms of all, the 23rd, David shows his time with the sheep must have been among the fondest memories and greatest learning experiences he ever had.  It is our prayer that such will be our case as we share David's inspired words almost 3000 years after they were written.

The Book of Psalms

The Psalms is a collection of hymns accumulated and organized over several hundred years. They range from the earliest, Psalms 90 which was written by Moses to those written after the Israelites returned from Babylonian Captivity.

Most commentators divide the book into 5 parts, each part reflects the five books of the law, Genesis, Exodus, Leviticus, Deuteronomy, and Numbers, these are also called the "Torah."  The following chart is taken from Irving Jensen's Study Book on the Psalms by Moody Press. 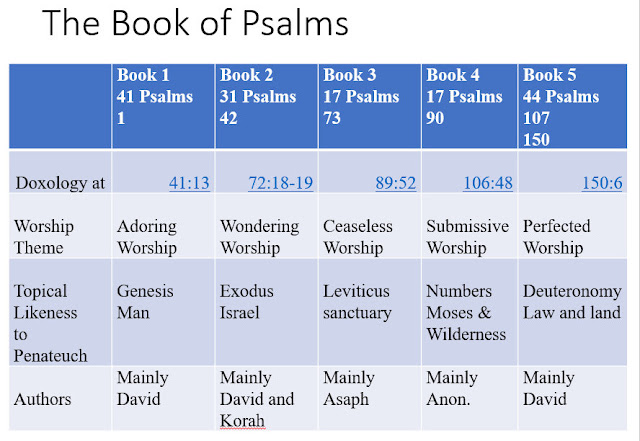 A PILGRIM OF GOD

A Characterization of The Shepherd's Psalm
by Henry Ward Beecher

"The TWENTY THIRD PSALM is the nightingale of the Psalms. It is small, of a homely feather, singing shyly out of obscurity; but, oh, it has filled the air of the world with melodious joy, greater than the heart can conceive! Blessed be the day on which  that psalm was born!
What would you say of a pilgrim commissioned of God to travel up and down the earth singing a strange melody which, when once heard, caused him to forget whatever sorrow he had? And so the singing angel goes on his way through all the lands, singing in the language of every nation, driving away trouble by the pulses of the air which his tongue moves with divine power.  Behold just such an one!  This pilgrim God has sent to speak in every language on the globe. It has charmed more griefs than all the philosophy of: the world. It has remanded to their dungeon more felon thoughts, more black doubts, more thieving sorrows, than there are sands on the seashore. It has comforted the noble host of the poor. It has sung courage to the army of the disappointed. It has  poured balm and consolation into the hearts of the sick, of captives in dungeons, of widows in their pinching griefs, of orphans in their loneliness. Dying soldiers have died easier as it was read to them: ghastly hospitals have been illuminated; it has visited the prisoner and broken his chains, and, like Peter's angel, led him in imagination, and sung him back to his home again. It has made the dying Christian slave freer than his master, and consoled those whom, dying, he left behind, mourning not so much that he was gone as because they were left behind and could not go too.
Nor is its work done. It will go on singing to your children and my children, and to their children, through all the generations of time: nor will it fold its wings till the last pilgrim is safe, and time ended; and then it shall fly back to the bosom of God, whence it is issued, and sound on, mingled with all those sounds of celestial joy which make heaven musical forever."

The 23rd Psalm is an account of the travels of a shepherd and his flock told from the perspective of the sheep.  David wrote this Psalm with the experiences he had as a young shepherd boy before the stress and responsibilities of being a king.  Though the Psalm is quite short it is the most famous and possibly the most well know scripture in the world.

The yearly travels of the Psalms 23 Shepherds 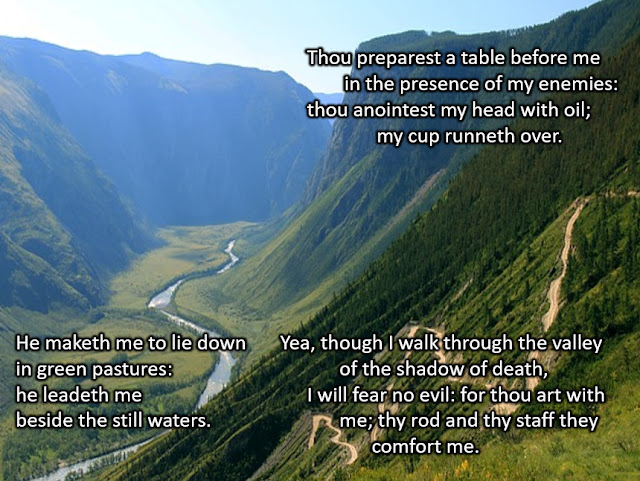 Outline of the Psalm:

Twenty Third Psalms Christians: Going Places With God.
#1 My Shepherd.
1 The LORD is my shepherd; I shall not want.

#2 In Green Pastures, Beside Still Waters
2  He maketh me to lie down in green pastures: he leadeth me beside the still waters.

#3 In Paths of Righteousness
3  He restoreth my soul: he leadeth me in the paths of righteousness for his name's sake.

#4 Through the Valley of Death's Shadow
4  Yea, though I walk through the valley of the shadow of death, I will fear no evil: for thou art with me; thy rod and thy staff they comfort me.

#5 At the Table
5  Thou preparest a table before me in the presence of my enemies: thou anointest my head with oil; my cup runneth over.

When did David write this Psalm?
Some believe David was quite young others argue that only someone who had endured life's valleys could write of them as David had.  Reese's Chronological Bible places the Psalm right after the battle of Goliath, when Jonathan and David became friends.

Verily, verily, I say unto you, He that entereth not by the door into the sheepfold, but climbeth up some other way, the same is a thief and a robber.  But he that entereth in by the door is the shepherd of the sheep.  To him the porter openeth; and the sheep hear his voice: and he calleth his own sheep by name, and leadeth them out.  And when he putteth forth his own sheep, he goeth before them, and the sheep follow him: for they know his voice.  And a stranger will they not follow, but will flee from him: for they know not the voice of strangers.  This parable spake Jesus unto them: but they understood not what things they were which he spake unto them.  Then said Jesus unto them again, Verily, verily, I say unto you, I am the door of the sheep.  All that ever came before me are thieves and robbers: but the sheep did not hear them.  I am the door: by me if any man enter in, he shall be saved, and shall go in and out, and find pasture.  The thief cometh not, but for to steal, and to kill, and to destroy: I am come that they might have life, and that they might have it more abundantly.  I am the good shepherd: the good shepherd giveth his life for the sheep.  But he that is an hireling, and not the shepherd, whose own the sheep are not, seeth the wolf coming, and leaveth the sheep, and fleeth: and the wolf catcheth them, and scattereth the sheep.   The hireling fleeth, because he is an hireling, and careth not for the sheep.  I am the good shepherd, and know my sheep, and am known of mine.  As the Father knoweth me, even so know I the Father: and I lay down my life for the sheep.  And other sheep I have, which are not of this fold: them also I must bring, and they shall hear my voice; and there shall be one fold, and one shepherd.  Therefore doth my Father love me, because I lay down my life, that I might take it again.  No man taketh it from me, but I lay it down of myself. I have power to lay it down, and I have power to take it again. This commandment have I received of my Father.