Being Baptist: An Historical and Doctrinal Survey Lesson 1 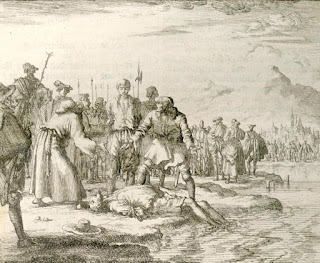 An Historical and Doctrinal Survey

Matthew 16:18 …upon this rock I will build my church; and the gates of hell shall not prevail against it.

It is our belief that the church was founded by Jesus during his earthly ministry and is still in the world today just as He promised. Satan, in order to prevent as many as possible from finding the "pillar and ground of the truth" has produced myriad counterfeits.  His plan is not to hide the church as a "needle in a haystack" but as a "needle in a needle-stack” The only way to find the real church is to know the marks of distinction which characterized the first church in Jerusalem and compare it with the churches of today.  Once these distinctives are discovered they can be used to trace the true church through the centuries, of persecution and blood to the day in which we live.

Listen to the words of John T. Christian, A History of the Baptists.  "They (Baptists) are like the river Rhone, which sometimes flows as a river broad and deep, but at other times is hidden in the sands.  It, however, never loses its continuity or existence.  It is simply hidden for a period.  Baptist churches may disappear and reappear in the most unaccountable manner.  Persecuted everywhere by sword and by fire, their principles would appear to be almost extinct, when in a most wondrous way God would raise up some man, or some company of martyrs, to proclaim the truth.  The footsteps of the Baptist of the ages can more easily be traced by blood than by baptism.  It is a lineage of suffering rather than a succession of bishops; a martyrdom of principle, rather than a dogmatic decree of councils; a golden chord of love, rather than an iron chain of succession, ...."

Theilman J Van Brought, Martyrs Mirror, “We have chosen holy baptism in preference to any other article of the Christian and evangelical religion. Because it is the only sign and proof of incorporation into the visible Christian church, without which no one, whoever he be, or whatever he may profess, or how separated and pious a life he may lead, can be recognized as a true member of the Christian church. This is fully, yet without controversy, shown and confirmed in the following history.”

J. M. Carroll, The Trail of Blood, “I want now to call your attention to some of the landmarks, or ear-marks of this religion — the Christian Religion. If you and I are to trace it down through 20 long centuries, and especially down through 1,200 years of midnight darkness, darkened by rivers and seas of martyr blood, then we will need to know well these marks. They will be many times terribly disfigured. But there will always be some indelible mark. But let us carefully and prayerfully beware. We will encounter many shams and make-believes. If possible, the very elect will be betrayed and deceived. We want, if possible, to trace it down through credible history, but more especially through the unerring, infallible, words and marks of Divine truth.

These characteristics have been labeled as the Baptist Distinctives. They are listed below.
The Bible as the only rule of faith and practice.

Baptism of the saved by immersion.

Priesthood of the believer.

Eternal security of the believer.

We can add the following.

Ordinances are symbolic not sacramental.

The church is independent from all authority except Christ's. 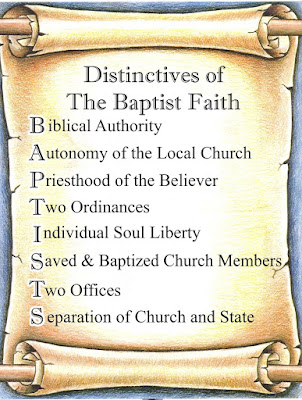 The general definition of the church is, “A company of baptized believers voluntarily associated together for the maintenance of the ordinances and the spread of the gospel." pg. 13 AHOTB

The Independent Baptist definition of a church is "a local, called-out, visible, assembly of baptized believers covenanted together for the carrying out of the Great Commission." DKM

Paul called the church, “the pillar and ground of the truth” yet many today regard attendance, membership, giving or submitting to the church as optional and even in many cases wrong.

The lack of teaching upon the church and the truth it protects has led to a terrible backsliding among Christians today. Error, immorality and apathy are all connected to how we understand the Lord’s church and to our relationship with it.
Posted by D. Kris Minefee at 8:00 AM