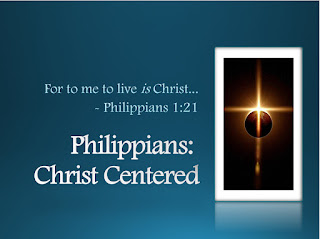 Paul gives several exhortations to finish his letter, list them below.
Be of the same mind.
Rejoice in the Lord
Let your moderation be known to all men
Be careful for nothing.
Think on these things
Those things you have learned, received, heard and seen in me do.

What does Paul ask Euodias and Syntyche to do?
To get along, to reconcile and have unity with each other. Some commentator think these two person are women who have been quarrelling, some as a husband and wife due to the meaning of the names Euodia is pleasant journey or fragrance and Syntyche means fortunate.

Vs. 3 Who does Paul ask to help them?
Someone he calls “True yokefellow” possibly a name this person took after becoming a Christian.  In the Greek it is Syzygos (Syzygos). Some see this as referring to Syntyche.

Vs. 4 According to Paul what should be happening in the church and among Christians instead of disunity?
Rejoicing always (chairete was the traditional word for farewell) and moderation (readiness to listen, a yieldingness that doesn’t retaliate) that can be seen by others.

What was the reason Paul gives for this attitude?
They should always rejoice in the Lord. He is the ground and cause of their joy, and they should show moderation because the Lord is at hand. In the Aramaic, it is the word Mar an atha

1 Corinthians 16:22 If any man love not the Lord Jesus Christ, let him be Anathema, Maranatha.

Vs. 6 What does Paul say is the cure for anxiety?
In everything by prayer and supplication with thanksgiving let your requests be made know to God.

Paul uses four words for prayer, what does each word mean?
Prayer - act of asking and worship toward God
Supplication - asking of God for a specific need or great desire
Thanksgiving - giving thanks for what God has done and in faith for what is yet to be received.
Requests – the things, wants or needs asked for.

Vs. 7 What is the result of this kind of praying?
The peace of God, shall keep (guard like a sentinel) your hearts (emotions) and minds (thought life) through Christ Jesus (his presence and power in us.)
Prayer therefore is the answer to the anxiousness Paul warns about in the previous verses of Chapter 4.

Vs. 8 Paul then gives a filter or sieve for our thought life.  It defines what we should be letting our minds dwell on.  List the elements of the filter in the following flowchart. 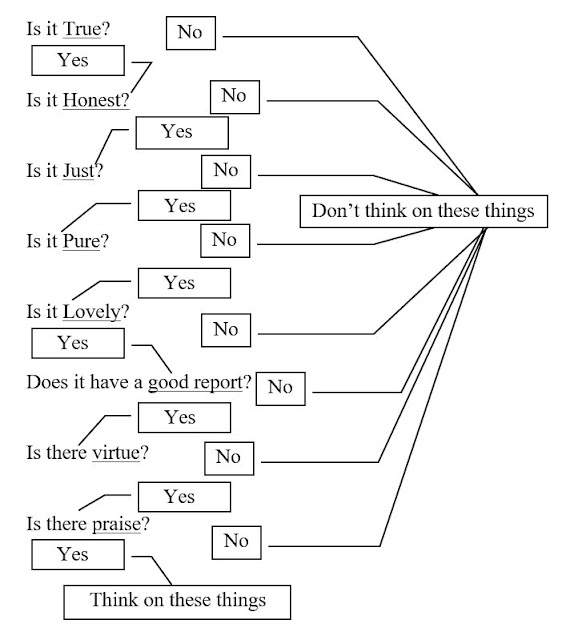 This is such a well know passage describing the Christian’s thought life as a way to regulate our mental health, let’s take some time to examine each word.

True – All things that agree with that which is right, unchangeable and real.
Honest – That which brings or is related to honor or reputation
Just – That which is right and equitable between ourselves and others including God.
Pure – That which is chaste, the opposite of being debased
Lovely – what is pleasing or causes a good affection or attractiveness
Good Report – Has a “good ring” like a genuine coin, reputable, trustworthy
Any Virtue – any good thing or that Paul has not mentioned
Any Praise – whatever may be praiseworthy, anywhere
Think on these things – set you mind on these things, let them shape your thought life and the actions that will follow.

Vs. 9 This is the second time Paul has urged the Philippians to imitate him or follow his example.

Philippians 3:17 Brethren, be followers together of me, and mark them which walk so as ye have us for an ensample.

Considering how Paul opened this section, dealing with the differences between Euodias and Syntyche, what is the purpose of offering himself as example?
If they all follow his example, as he followed Christ, then there would be unity in their actions and beliefs.

What words does Paul use to describe what to follow concerning himself and what do they each mean?
Learned – that which Paul taught them from preaching and writings
Received – Accepted and believed as Paul acted as one God had sent.
Heard – What was received secondhand from those like Timothy and Epaphroditus.
Seen – Not directly taught by Paul or others but the life and actions they saw when Paul was with them.

What should be their response in light Paul’s example?
They are to do the things they have learned, received, heard and seen. The Greek is imperative mood (a command) present tense which means keep on doing them, keep on making them the practice of your faith and life.

What is the reward for doing that which they have learned from Paul?
The God of peace shall be with them.

The same three words are used in vs. 7 (the peace of God) but in a different order how does this change the emphasis and the reward?
God is the subject of peace rather than the it’s description. The "peace of God" is a powerful gift that Paul says is bestowed through prayer. That peace guards our hearts from anxiety, worry and fear, but the "God of peace" is the promise of God himself dwelling with us as we live in accordance to his word. The first is His peace the second is His presence both are desperately needed in the Christian life.

Application:
What lesson can I learn from Paul’s appeal to Euodias and Syntyche?

What can I take to heart considering his request to Syzygos?

Does Paul’s cure for anxiety still work in the 21st Century?

Specifically, in my own mental processes, how can I use Paul’s “thought life” filter?

Though this section is the “practical” section of Paul’s letter, it is different from others.  It is more personal, due to Paul’s time with the church. It is also very much influenced by Paul’s Greek and Gentile education and training. This would be something the Greeks of Philippi would relate to.

For us it is a passage about mental discipline and emotional peace with those we serve with. It is more about ideals and lifestyle goals than about specific actions. It is about the Christian life becoming a lifestyle, Christian truths becoming my mindset for all thoughts and the actions that follow.
Posted by D. Kris Minefee at 4:21 AM