Galatians: In Defense of Grace Lesson 2 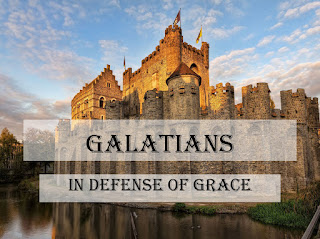 I marvel that ye are so soon removed from him that called you into the grace of Christ unto another gospel:  Which is not another; but there be some that trouble you, and would pervert the gospel of Christ.  But though we, or an angel from heaven, preach any other gospel unto you than that which we have preached unto you, let him be accursed.  As we said before, so say I now again, If any [man] preach any other gospel unto you than that ye have received, let him be accursed. For do I now persuade men, or God? or do I seek to please men? for if I yet pleased men, I should not be the servant of Christ.

What or who are they removed from?
God, the Father

Another gospel, which is not another

Two different Greek words for another

There is only one real gospel, the other is false and wrong.

The opposite of Paul's wish for them of peace.

Accursed:
anathema {an-ath'-em-ah}
AV - accursed 4, anathema 1, bind under a great curse + 332 1; 6
a thing devoted to God without hope of being redeemed, and if an animal, to be slain; therefore this is a person or thing doomed to destruction.

Why is the warning given twice?  To emphasize Paul's opposition and stance.

But I certify you (will have you know), brethren, that the gospel which was preached of me is not after man.  For I neither received it of man, neither was I taught it, but by the revelation of Jesus Christ

Looking at this introduction what is Paul going to be talking about?
His authority as an Apostle to preach the Gospel.

Paul’s Gospel was not after a human standard but God’s therefore he does not try to conform to a human ideal.

For ye have heard of my conversation in time past in the Jews' religion, how that beyond measure I persecuted the church of God, and wasted it: And profited in the Jews' religion above many my equals in mine own nation, being more exceedingly zealous of the traditions of my fathers.

What is Paul's purpose in recalling his early years as a prosecutor of the church?

It shows his lack of connection with the early days of the church, and his knowledge of Judaism and the Pharisees.  If the law could be mixed with grace, Paul would have been the one to teach it, not others.

But when it pleased God, who separated me from my mother's womb, and called me by his grace,  To reveal his Son in me, that I might preach him among the heathen; immediately I conferred not with flesh and blood: Neither went I up to Jerusalem to them which were apostles before me; but I went into Arabia, and returned again unto Damascus.

What does Paul's statement about separated me from my mother's womb and called by His grace teach us about Sovereignty and election?

Paul like other prophets and heroes before him was chosen by God from the moment of conception. This shows God's foreknowledge of Paul before he was born.

What does the phrase, "reveal His Son in me," mean?

It refers to Paul's salvation experience, especially the dramatic fashion seen on the Damascus Road.

Paul states his independence from all possible sources of authority at this time.  What were those sources?

Flesh and blood, the apostles at Jerusalem. If Paul was not fully sure of his gospel or needed instruction he would have gone to the apostles.

Where did Paul go after his salvation experience? Why did he go?

Arabia and then to Damascus for three years.  Arabia was a place of isolation away from former friends (the Pharisees) and enemies (the churches)  Here Paul would rethink and relearn all his Jewish teaching with the new revelation of Jesus as the Messiah.

Then after three years I went up to Jerusalem to see Peter, and abode with him fifteen days.  But other of the apostles saw I none, save James the Lord's brother.  Now the things which I write unto you, behold, before God, I lie not.

How long was it before Paul actually met one of the apostles?
Three years after his conversion.

What was the occasion of Paul meeting with Peter?
The Jews in Damascus sought to kill him.

Acts 9:23-31   And after that many days were fulfilled, the Jews took counsel to kill him: But their laying await was known of Saul. And they watched the gates day and night to kill him. Then the disciples took him by night, and let him down by the wall in a basket. And when Saul was come to Jerusalem, he assayed to join himself to the disciples: but they were all afraid of him, and believed not that he was a disciple. But Barnabas took him, and brought him to
the apostles, and declared unto them how he had seen the Lord in the way, and that he had spoken to him, and how he had preached boldly at Damascus in the name of Jesus.  And he was with them coming in and going out at Jerusalem.  And he spake boldly in the name of the Lord Jesus, and disputed against the Grecians: but they went about to slay him.  Which
when the brethren knew, they brought him down to Caesarea, and sent him forth to Tarsus. Then had the churches rest throughout all Judaea and Galilee and Samaria, and were edified; and walking in the fear of the Lord, and in the comfort of the Holy Ghost, were multiplied.

Afterwards I came into the regions of Syria and Cilicia;  And was unknown by face unto the churches of Judaea which were in Christ: But they had heard only, That he which persecuted us in times past now preacheth the faith which once he destroyed.  And they glorified God in me.

Paul accounts for the last of his time chronologically before starting out on his missions.  Why did he point out that he was "unknown by face to the churches of Judea?"

It was his final proof that his gospel had come directly from God and not from men.

What can we learn from Paul's dogged determination to show his gospel is from God?
Never accept secondhand what you should know firsthand.

What of the application of authority not in a believer but in a church?

Paul's commission came from God, not a council of apostles.  The church sent directly by God, must also be independent of man-made councils or commissions as Paul was.

What is the place of isolation and consultation in the life of a believer?
There is strength in numbers, but vision comes in solitude.  Paul needed time alone with God in order to be strengthened, instructed and filled.  We must seek our own times in "Arabia's."

Paul begins his “defense of grace” by defending his apostleship and authority. Without that authority then Paul’s teaching was secondhand and second-rate. If the Judizers, the troublers of the Galatian churches, could show they had authority equal to Paul, then their doctrine might be seen as also being equal. Paul defends himself, not because he needed it, but because the truth demanded it.

In the same way, you and I must never accept any other authority for our Gospel and truth other than the direct revelation of God through His Word, the Bible. It is not our church, our tradition and certainly not our opinion that counts but only the authority of God than can be as clearly traced from God’s Word as Paul’s travels were traced from Damascus to Jerusalem and then to Antioch.