A.  History and Founding

Modern Freemasonry evolved from the stone masons and cathedral builder guilds of the Middle Ages.  As cathedral building dwindled guild membership was opened to non-masons.

The 1st Grand Lodge was formed in 1717 at Apple Tree Tavern in England, it was an association of four older lodges.

Masons, themselves, claim a mythical, fictitious, history going all the way back to the Egyptian pyramids and the building of Solomon's Temple.

Albert Pike was a Freemason, who had been an explorer and an officer in the Confederate Army. He wrote the book “Morals and Dogmas” in 1871. This book established the Scottish Rite. It was reprinted in 1948 and is still the standard description of the 32 degrees of the Scottish Rite.

Shiners is a auxiliary of Master Masons, which reaches out to the community through the financing of hospitals especially for children with burns and birth defects.

B.  The Degrees of Freemasonry

1.    God, The Great Architect of the Universe

A Supreme Being who accepts worship from all pagan, animist, Hindu, Jew or Christian.
"Each of us makes application to his own faith and creed, as seems to him proper -pg. 276 Morals and Dogmas
Pike named all these deities in Moral and Dogmas as equal or the same being.  Reason, Isis, Brahma, Soul of the World, Osiris, Ormuzd.
"He creates nothing, but everything emanates from Him, and all other gods are but his manifestation." pg. 281 M & D.

2.    The Symbol of Freemasonry 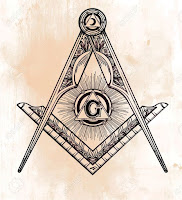 The Letter G
Pike says it should be Yod the Hebrew letter that begins Yahweh.

"Adam is the human Tetragram, which is summed up in the mysterious Yod of the Kabbalah, image of the Kabalistic Phallus.  Add to this Yod the ternary name of Eve and you form the name of Jehovah."

Square and compass. "The square is an instrument, adapted from the plane surface only, and therefore appropriate to Geometry, or measurement of the Earth which appears to be a plane. The compass is an instrument that has relation to spheres and is adapted to spherical trigonometry.. The compass therefore is a natural symbol of heaven."
"The compass is the Hermetic symbol of Creative deity, and the square of the productive earth or Universe."

In other words... God is the creative force, not a personal God but an energy of creation, within this force is both male and female, compass and square, their perversion of Yahweh and other phallic, pagan worship symbols.

"In the beginning was the Word, and Word was near to God and the Word was God."  The Word came into existence and was and this word was near to God ie. the immediate or first emanation from God.  pg. 280 M& D
His other names are Krishna, Kount-tse, Gosiah, Har-Ori, Love, Balder, Buddha

The name of Jesus is forbidden in Masonic lodge and is removed from Masonic Temple Bibles.
"When a brother reveals any of our great secrets... or even whenever a minister prays in the name of Christ in any of our assemblies, you must... if called upon, to cut his throat from ear to ear, pull our his tongue by the roots and bury his body at the bottom of some lake or pond."  Pg. 74 Masonic Handbook.

Conclusion, Jesus is not God or equal to God.  He is a created being and only a great teacher.  He is equal not superior to all leaders of world religions.

It is without Christ, "If we with suitable true devotion maintain our Masonic profession, our faith will become a beam of light and bring us to those blessed mansions where we shall be eternally happy with God, the Great Architect of the Universe."  The General Ahiman Rezon, 79.

It is without faith. "The dunces who led primitive Christianity astray by substituting faith for science... have succeeded in shrouding in darkness the ancient discoveries of the human mind; so that we now grope in the dark to find the key of the phenomena of nature."  pg. 732 M & D.

"The third apartment represents the consequences of sin and vice, and the hell made of the human heart by its fiery passion.  If any see in it also a type of Hades of the Greeks, the Gehenna of the Hebrews, the Tartaurus of the Romans or the Hell of the Christians, or only of the agonies of remorse and the tortures of an upbraiding conscience, it is the right of each to do so."  pg. 289 M & D.

"The world was his revelation, God revealed, and subsisted only in Him.  His attributes were there produced with various modifications and in different degrees."  pg. 286 M & D.

"Beautifully, above the great wide chaos of human errors, shines the calm, clear light of natural human religion, revealing to us God or the Infinite Parent of all, perfectly powerful, wise, just loving and perfectly holy too.  Beautiful around stretches off every way the Universe, the Great Bible of God, Material Nature is the Old Testament and Human Nature is the New Testament of The Infinite God."
Freemasonry Comparison
Posted by D. Kris Minefee at 9:16 AM