The Death, Burial and Resurrection of Jesus Christ from the Book of John


The Death, Burial and Resurrection of Jesus Christ from the Book of John 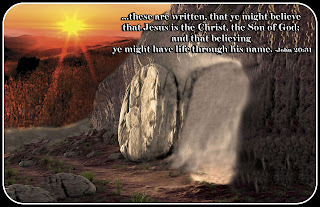 John 19 The Crucifixion of Christ

Jesus upon the cross John 19:16-30
Why do you think the description of the method of crucifixion has so few details?
It was a well know and ancient means of death.

Why did Pilate write “King of the Jews” for Jesus accusation?
In order to spite the ruling Jews and perhaps to appease in some way his own conscience.

Why did Jesus tell Mary, “Behold thy son” and John, “behold, thy mother.”
Jesus as the first born son was responsible for the care of his mother since her husband was dead.   This was the fulfillment of that responsibility.

How did Jesus fulfill scripture by saying, “I thirst.”
They brought him vinegar to drink as prophecy said they would.

What is the physical and spiritual application of the water and blood flowing from Christ’s side?
Physically, it shows he was truly dead.  The blood and water signified a burst heart.  Spiritually, it showed a washing of the blood from sin and of water the word or God.

What is significant about Nicodemus coming with Joseph to claim the body of Christ?
He had believed in Jesus, and was now no longer ashamed or afraid.

Vs. 40 How does this verse compare or contrast to the “shroud of Turin?”
The scriptures plainly say in several places he was wound in linen clothes (plural).  The shroud is one piece of cloth folded around a crucified man.

The Day Christ Was Crucified.

The Jewish "day" starts at sunset, a Roman "day," started at midnight like ours today.

The Israelites used the Roman count of four watches during the night.  These began at approximately 9:30 PM, 12:00 midnight, 2:30 AM (the cockcrow watch), and 5 AM.  Starting at sunrise they divided the day into "hours."  Thus when they said that something happened at the 6th hour it was about noon or 6 hours after sunrise, not 6 AM like we would say today.

This provides an exact fulfillment (72 hrs) of Jesus prophecy concerning the prophet Jonah.  Matthew 12:40
Has triumphal entry with people cutting branches and animals working on a Sabbath day. Note Deut 5:14
Why didn’t the women come on Friday to anoint Jesus body?
Why would Jesus wait until Sunday morning to appear?

Puts Triumphal Entry on Sunday rather than Sabbath.
Lacks a full 72 hours in the grave, but note Acts 10:40
Double Sabbaths explains why women waited to anoint the body.
Reconciles with Luke 24:21 (see chart below)

Has only 1 ½ days in tomb.
Has to have one day (Wednesday) with nothing happening.
Simplest interpretation of John 19:31

The following is by Lori Eldridge and taken from her website http://www.prophezine.com/

Nisan 9th:
This is the only day in the week that could have been the weekly Sabbath due to all the work being performed on the other days and all the nights Jesus returned to Bethany.

Nisan 12th
Jesus spend the night in Bethany (Mark 11:19). Mark indicates that the next morning on the way from Bethany to Jerusalem they saw the fig tree withered on the way back to the Temple (the tree was near Bethany). Mark and Matt differ on when they saw it withered but it is possible one of them didn't see it the night before in the dark.
Jesus went into the Temple courts (Matt 21:23; Mark 11:20, 21). This is the day all the Pharisees, Sadducees and others tried to trap Jesus into saying things that they could arrest him with. All three gospel accounts are almost word for word on the events of this day. Jesus then gave the Olivet Discourse before leaving the city that afternoon while sitting on the Mount of Olives (Matt 21:23-26:1, Mark 11:20-13:37; Luke 20:1-Luke 21:5).

Nisan 13th
Around sunset they leave Jerusalem and head for Bethany where they will be eating dinner at Simon's (Matt 26:6; Matt 14:3, John 12:1-8). They obviously spend the night in Bethany. Next day (but same day according to Jewish time) the disciples ask where to prepare the Passover. Jesus tells them where it will be and they go to make preparations in Jerusalem.

Nisan 14th
Jesus and his disciples are now in Jerusalem eating their Passover shortly after sunset as God had instructed in the Exodus and Leviticus passages on Passover. Jesus retires to the Garden of Gethsemane on the Mount of Olives.
He prays while his disciples sleep till dark (John 18:3). He is arrested (Matt. 26:20-50; Mark 14:17-46; Luke 22:14-54; John 13:1-18:12). He is tried all through the night and hung on the cross and dies about 3 PM in the afternoon. He is buried before sunset (still the same day) because of the High Holy Day coming on for Passover

By counting backwards from the day of the crucifixion it is easy to see that several days in a row could not have been the Sabbath. That leaves only one day that could be a Sabbath: Nisan 9. It is also very logical that Jesus would have rested on this day after such a long trip and especially with all the activities of the coming week and especially the 10th which was one of the most important days of his life. If you add seven days onto the Sabbath of the 9th then you get Nisan 16th as the next Sabbath, which would mean there was a High Holy Day Sabbath on the 15th and then the weekly Sabbath on the 16th, i.e., back-to-back Sabbaths right after the crucifixion. Also if the 16th was a Sabbath then that made Nisan 14, the day of the Crucifixion, a Thursday.

Luke 24 tells us that on the first day of the week (Sunday), after Jesus arose, two disciples were walking to Emmaus and were greeted by Jesus, but they didn't recognize him. They told him what had recently happened to their Savior and that it had been "the third day since all this took place." This probably occurred in the afternoon because shortly after this they are eating dinner in Emmaus (Luke 24:21-29).

The following chart is provided so you can count backwards from Sunday to see which day fits the 3 day requirement.

Peter and John see the empty tomb John 20:3-8
Who is “that other disciple?”
John refers to himself this way.

The three words for see or saw in these verses are different words in the Greek.
blepei: Vs. 5 A mere partial viewing of the burial spot form the entrance to the tomb.
theorei: Vs. 6 beholding something, looking close, examining it.
eiden: Vs. 8  perceiving to the point of belief.

Vs. 11-18  Why doesn’t Mary react to the angels or recognize Jesus when he first speaks to her?
Shock and deep grief prevent her from seeing what would be obvious in a normal situation.

What finally causes Mary to recognize Jesus?
He calls her name.

Explain why Jesus told Mary, “touch me not?”
Literally, the phrase means “don’t cling to me.”  Jesus was not going to continue living on the earth.  His relationship with Mary and the other disciples would not involve his physical presence.

Vs. 19-31 Jesus appears before the disciples.
Why did Jesus breath on the disciples?
He gave them the indwelling of the Holy Spirit as he had promised in John 14:17.

What authority did Jesus give them?
The authority to forgive or retain the sins of others.

How is this authority administered?
Through the gospel, which is given to all conditionally.  If they accept the gospel their sins are forgiven if they reject it their sins remain.

Thomas was absent at the first appearance and did not accept the testimony of the others.  When Jesus appeared the second time, what was Thomas reaction?
Faith, even without having to touch the scars.  His statement, “My Lord and My God” is one of the strongest and plainest in scripture.

Vs. 29 What does Jesus say about faith and signs after Thomas’ confession?
Those who believe without seeing are blessed.  A greater faith and therefore a greater blessing for those who could not see Jesus.

Vs. 30-31 What is the purpose of John only recording the certain miracles of Jesus?
To cause belief without seeing to those who followed.