The Real Story of Jesus Birth


The Real Story Of Jesus’ Birth 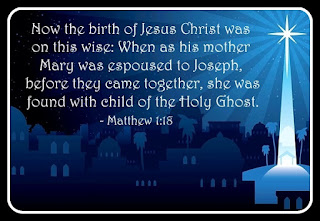 Where was Jesus born?
Bethlehem of Judea

Why was he born her when His earthly parents lived in Nazareth?
A taxing was order by the emperor and all had to return to their hometowns to be counted.

Who announced his birth?
Angels

Where were they told to look for the baby?
They were only that the baby would be lying in a manger, which meant the family were staying with animals, could have been a shallow cave, or a stable.

In Matthew 2 where did Joseph and Mary live when the wise men arrived?
In a house, no longer with the animals, but probably a rented house.

How many wise men were there?
We are not told, only that there were three gifts. This has lead to the idea of three wise men but all we  really know is that there was more than one.

Why did Herod have all the children murdered?  Why 2 years old and down?
This was dating back from the time the star appeared.

So how old then was Jesus when the wise men visited?
The wise men’s visit is around 2 years after Jesus was born. Jesus is no longer a babe but a young child, a toddler, as Matthew points out.

THE PLACE:
Mary and Joseph returned to Bethlehem because of a census ordered by Augustus and carried out by Cyrenius/ Quirinius, governor (Legat) of Syria. Quirinius was legat of Syria in 6 AD. Many bible historians hold the opinion he was in office 13 years earlier and newer research found there was a census ordered by Rome in 12 BC, which was concluded after 8 or 7 BC. Orders spread out over an entire empire took time, Syria was at the eastern edge of the Roman Empire.

THE YEAR:
Jesus was born during the reign of King Herod. Herod the Great ruled from 39BC to his death in 4 BC. Mary and Joseph fled with Jesus to Egypt after the visit of the wise men. In those days no weekend trip and it is assumed they stayed one winter before they heard of Herod's death and returned to Nazareth. So, taking in consideration the census that ended in 7 BC and the death of Herod in 4 BC. Jesus would have to be born between 12 and 5 BC. Today most place his birth at 7-5 BC.

THE MONTH:
Luke 2,8: "That night some shepherds were in the fields outside the village guarding their flocks of sheep"... During winter nights sheep were normally held in stables. They were only left in the fields during warmer spring or summer nights.

History of the Magi
According to Herodotus, which lists the names of the six tribes or castes of the Medes, the Magi were a hereditary caste of priests. They were highly influential in Median society until the unification of the Median and Persian Empires in 550 BC, after which their power was curtailed by Cyrus the Great and by Cyrus' son Cambyses II. The Magi revolted against Cambyses and set up a rival claimant to the throne, one of their own, who took the name of Smerdis. Smerdis and his forces were defeated by the Persians under Darius I. The Magi continued to exist in unified Persia, but their influence was limited after this and other political setbacks, and it was not until the Sassanid era (AD 226–650) that they would again achieve prominence.

The Book of Jeremiah (39:3, 39:13) gives a title rab mag "chief magus" to the head of the Magi, Nergal Sharezar.   It's also believed by some Christians that the Jewish prophet Daniel was "rab mag" and entrusted a Messianic vision (to be announced in due time by a "star") to a secret sect of the Magi for its eventual fulfillment (Daniel 4:9; 5: 11). - http://en.wikipedia.org/wiki/Magi

How did the Magi Know about the Messiah?

The above article is right in that Daniel left a message but wrong in that is was secret. The message was prophetic and would become clear when the time was fulfilled.

The prophetic passage is found in Daniel Chapter 9, the 70 Weeks Prophecy and is the key to all Biblical prophecy and give the exact date when the Messiah would be born.

What is the purpose of the seventy weeks?
Daniel 9:24  Seventy weeks are determined upon thy people and upon thy holy city, to finish the transgression, and to make an end of sins, and to make reconciliation for iniquity, and to bring in everlasting righteousness, and to seal up the vision and prophecy, and to anoint the most Holy. (Temple) 70 x 7 = 490 years

How does 2 Chronicles 36:20 fit in with Daniel 9?
2 Chronicles 36:20   And them that had escaped from the sword carried he away to Babylon; where they were servants to him and his sons until the reign of the kingdom of Persia:  21To fulfill the word of the LORD by the mouth of Jeremiah, until the land had enjoyed her Sabbaths: for as long as she lay desolate she kept Sabbath, to fulfill threescore and ten years (70).

How long is the “week” in Daniel 9?
From Hebrew word shabuwa, meaning seven, or a period of seven (days or years), heptad, week.

When event begin the 70 weeks?
Daniel 9:25   Know therefore and understand, that from the going forth of the commandment to restore and to build Jerusalem unto the Messiah the Prince shall be seven weeks, and threescore and two weeks: the street shall be built again, and the wall, even in troublous times.

When would Messiah be revealed?
At the 69th week.

Now how do you suppose the appearance of the star brought the Magi to the prophecy given over 400 years before?
They saw the star and went back to the prophecies they had recorded. They found the prophecy by Daniel and going backward from the 69th week knew they would be looking for the baby.

Probably the star was a miracle from God, rather than a natural event, still if God chose to use a natural event like a comet or a nova there are some interesting historical events that could fit the description of a star as given in Matthews account.

Defining the word star used by Matthew in chapter 2:2 “Saying, Where is he that is born King of the Jews? for we have seen his star in the east, and are come to worship him.”
The word star in the original Greek is …
Aster. It is a general term for any kind of heavenly body, i.e. a star, a planet, an asteroid, a comet, or a meteor.

In 12 BC Halley’s Comet was charted by the Chinese started on Sept 10th and continuing for the next 56 days.

In 7 BC the Babylonian astronomers recorded a triple conjunction of the planets Jupiter and Saturn, an event that only occurs once every 900 years.

Another conjunction of planets moving though the Zodiac took place in 3 BC which the astrologers of the time would look upon as signaling great changes in the world.

Strengths and Weaknesses
·       Halley’s Comet of 12 BC
The time is before most would say the birth Christ could have occurred. Also, the comet that year was barely brighter than a normal star and would have not attracted much attention from the magi of Babylon whose records would noted it years before.

The problem with this event is the plural conjunctions of the “stars” rather than a singular “star.” Had the planets moved closer together so that they appeared as a single star to the naked eye the language would fit closer that used by the magi when they asked Herod for directions to the Messiah’s birth.

·       The 5 BC “Stars” of the Chinese and Koreans
The star that appeared from March to April was not a comet for it did not move. The best explanation was that it was a nova which would make it brighter than the normal stars and would appear and even reappear as the sun that created the nova could have multiple explosions separated by months or years.

If this event has a weakness it is in the novae themselves. The magi, Chinese and other astronomer/astrologers of the time would probably not think a nova a major portend of great change since they appear about every ten years somewhere in the sky.

·       The conjunctions of 3 BC
To those familiar with astrology the movement of the planets during this time would signal great change and depending on the interpretation of the signs could point to a new world ruler.
The problem with this view is the need for astrology and its very careful interpretation.  Astrology by its very definition must be understood through the interpretation of the astrologer. This would vary greatly between astrologers of Rome and the magi of Babylon. There is not much evidence that the magi used such astrological interpretation to look for the Messiah of the Jews. It would be much more likely that any great events foretold by the stars through astrology would be interpreted with the Roman Emperor Augustus in view rather than anyone from the conquered and inconsequential nation of Israel.

The other problem with this view is the lateness of the date. Most historians believe Herod died in 4 BC and since the birth of Jesus had to occur before Herod’s death any “star” event in 3 BC would be too late.

Conclusion
I am more than content to believe that the “Star of Bethlehem” was a miracle of God, especially when you consider the second reappearance that led the magi to the stable.

If, however God used a natural celestial event in conjunction with the birth of Jesus I would lean towards the 5 BC star and the later appearance in that same year or the next of a comet with it’s tail pointing directly down toward the stable.

However, what is paramount in the real story of Jesus birth is not the exact date or time, but the historical reality of the event. Jesus came into the world as foretold thousands of years before and by multiple 100s of scripture. Jesus was truly born, lived and died and that same historical reality give us more confidence in the scripture and in the other prophecies that are still to be fulfilled.
Posted by D. Kris Minefee at 8:37 AM