Living as Positive People In a Negative World: 3 That Blessed Hope

Living as Positive People In a Negative World: 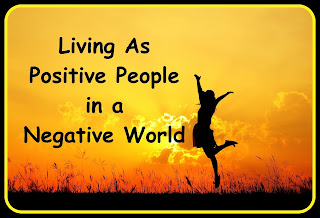 Review: Titus 2:11-13 For the grace of God that bringeth salvation hath appeared to all men,  Teaching us that, denying ungodliness and worldly lusts, we should live soberly, righteously, and godly, in this present world; Looking for that blessed hope, and the glorious appearing of the great God and our Saviour Jesus Christ;

In verse 11 we saw the reason that we are positive people. That reason was God’s grace which brought us salvation has appeared to all men in the person of Jesus Christ. In all this universe that reality will overcome a lot of negativity.
In verse 12 We learned how we are to live as positive people. Denying ungodliness, and worldly lusts. We should live in soundness of mind with in ourselves, rightness of heart with others and godly in our relationship with Him.

Now in verse 13 we are going to see that looking for Jesus return gives us hope to overcome even the darkest days and most terror filled nights.

In the library of Congress there are several inscriptions, written on tablets in letters of gold, most of them taken from the Bible but one is a quote from the poet Alfred Tennyson. It says: "One God, One Law, One Element and One far-off divine event toward which the whole creation moves." That divine event is what we are going to talk about today. The event toward which all of creation inexorably is being drawn and the event which shines as a bright rays of light no matter how deep the gloom of this world may become.

The Greek word speaks of expectation, eagerness and anticipation.
To the people of the New Testament, those who Paul and Peter and the other apostles wrote to, looking forward meant not just an positive attitude but a positive lifestyle. They thought and acted differently because they were looking for the return of Jesus Christ.

1 Peter 3:11-14
Seeing then that all these things shall be dissolved, what manner of persons ought ye to be in all holy conversation and godliness, Looking for and hasting unto the coming of the day of God, wherein the heavens being on fire shall be dissolved, and the elements shall melt with fervent heat? Nevertheless we, according to his promise, look for new heavens and a new earth, wherein dwelleth righteousness. Wherefore, beloved, seeing that ye look for such things, be diligent that ye may be found of him in peace, without spot, and blameless.

Positive People are really looking for the return of Christ.

If you are really looking for His return then it affects your attitude.
How can we be negative if we look for his coming?  How can we carry bitterness, hurt, or sorrow?
Jesus is coming, that truth should lift our spirits and hearts. It should bring us closer to Him who is coming, and my brothers and sisters in Christ who wait for Him with me.

If you are looking then it should affect your lifestyle.
How can I live a life that in any way denies Christ if I believe He is coming back? How can I dwell on the hurt, the pain or the suffering when I’m looking up for the return of Jesus Christ?  My goals, my dreams, and my actions must change if Jesus is coming back and I am sincerely looking for that event.

Quote: The primitive church thought more about the Second Coming of Jesus Christ than about death or about heaven. The early Christians were looking not for a cleft in the ground called a grave but for a cleavage in the sky called Glory. They were watching not for the undertaker but for the uppertaker. - Alexander Maclaren (1826–1910)

That Blessed Hope and Glorious Appearing,

Paul says it is that blessed hope. A specific hope, not a general hope but that hope of that one blessed event when Jesus returns. Often when we read Paul speaking of that hope or the hope it is in reference to the return of Jesus Christ. That is THE Hope above all others. The hope that shines when all others have been dimmed.

Paul says that hope is blessed. A blessing is a gift from God.
The return of Christ gave hope to those in Paul’s time who were suffering persecution due to their belief in Jesus Christ.

Hope was their long-range faith. A faith that could see all the way to the end of time. That hope would be their final, indisputable proof that their faith was not misplaced.  It would be their final and greatest defense. Jesus would return to defend and fight for them against all enemies.
Hope would keep them going.  Hope would keep them faithful.  Hope would overcome their worst trails. They could hold out and hold on because Jesus was coming back!

Our ancestors in the faith, the ana-baptist were persecuted, imprisoned, exiled and murdered. They were driven from the homes, had their children taken from them and put on trial for their faith. At times it seemed all the world and the power and politics of all state churches were against them. How did they keep going? Why would they bother to keep going. One historian said this, “Their eschatology (belief in the second coming) saved them from utter despair. - W. R. Estep.

Paul goes on to say it would be a glorious appearing. I can’t do anymore to explain that than to read from the book of Revelation which opens that window into the future and lets us see for ourselves.

Revelation 19:11-17 And I saw heaven opened, and behold a white horse; and he that sat upon him was called Faithful and True, and in righteousness he doth judge and make war.   His eyes were as a flame of fire, and on his head were many crowns; and he had a name written, that no man knew, but he himself.  And he was clothed with a vesture dipped in blood: and his name is called The Word of God.  And the armies which were in heaven followed him upon white horses, clothed in fine linen, white and clean.  And out of his mouth goeth a sharp sword, that with it he should smite the nations: and he shall rule them with a rod of iron: and he treadeth the winepress of the fierceness and wrath of Almighty God.  And he hath on his vesture and on his thigh a name written, KING OF KINGS, AND LORD OF LORDS.
No more doubts, no more fears, no more hypocrisy, no more doubts, Jesus has come as Lord of Lord and Kings of Kings.

We need to reclaim our anticipation and joy for the return of Jesus Christ.

We need to understand how vital it is for us in this present evil age and how powerful a motivator it can be.

More than a fourth of the Bible is predictive prophecy.
Approximately one-third of it has yet to be fulfilled.
Of the 260 chapters in the New Testament, there are more than 300 references to the Lord’s return, one out of every thirty verses.
Twenty-three of the twenty-seven New Testament books refer to this great event.
For every prophecy on the first coming of Christ, there are eight on Christ’s second coming. - George Sweeting

Illustration- Baptist Evangelist, Vance Havner – Answers in the Back of the Book

When I studied arithmetic, I remembered that the answers were in the back of the book. No matter how I floundered among my problems, the correct solution was on the last page. I have failed often in working out life's problems, and I dwell in the midst of a people who are hopelessly trying to untangle the riddle of this present age. But I am cheered by one unfailing uncertainty-there is a Book that solves the enigma and the answer is in the back of the Book, - Vance Havner
Transition: We can be positive people in this negative world because we have the answer in the back of the book and that answer is Jesus Is Coming Again.

Paul declares That Jesus is Our Great God and Savior Jesus Christ.
Some don’t like this verse because it is such a clear declaration of Jesus deity.
They will admit he existed, they admit he died upon the cross but they will never admit that He is also God. But you cannot believe in Jesus without believing in Him as God and Savior.

Yet that is exactly what the Word of God says
John 8:58 Jesus said unto them, Verily, verily, I say unto you, Before Abraham was, I am.
John 10:30  I and my Father are one.
Romans 9:5 Whose are the fathers, and of whom as concerning the flesh Christ came, who is over all, God blessed for ever. Amen.

You cannot have the power of positive Christianity, you can’t have Christianity at all,  if you don’t understand, believe and take your stand on the truth that Jesus is both Savior and God.

Who is Jesus to you?

Is he a great teacher?  A great prophet?  A great man?
Is he messiah?  Is he the promised one of God?
He must be all of these but if He is not God first and above all others then Jesus is nothing to you at all. Your belief is mistaken, misplaced and misappropriated and it will not sustain nor save you.
Names of Jesus
Scripture tells us that Jesus is the Angel of the Lord, the branch of Jesse, the root of David, the Dayspring on High, the bright and morning star, the Lilly of the Valley, the prince of Peace, the Messiah, the Anointed One, the beginning and the end, the Alpha and Omega.

At the University of Chicago Divinity School each year they have what is called "Baptist Day". It is a day when all the Baptists in the area are invited to the school because they want the Baptist dollars to keep coming in.
On this day each one is to bring a lunch to be eaten outdoors in a grassy picnic area. Every "Baptist Day" the school would invite one of the greatest minds to lecture in the theological education center.

One year they invited Dr. Paul Tillich. Dr. Tillich spoke for two and one-half hours proving that the resurrection of Jesus was false. He quoted scholar after scholar and book after book. He concluded that since there was no such thing as the historical resurrection the religious tradition of the church was groundless, emotional mumbo-jumbo, because it was based on a relationship with a risen Jesus, who, in fact, never rose from the dead in any literal sense. He then asked if there were any questions.

After about 30 seconds, an old black Pastor with a head of white hair stood up in the back of the auditorium.
"Docta Tillich, I got one question", he said as all eyes turned toward him. He reached into his sack lunch and pulled out an apple and began eating it.
"Docta Tillich ... CRUNCH, MUNCH My question is a simple question, CRUNCH, MUNCH...Now, I ain't never read them books you read... CRUNCH, MUNCH...and I can't recite the Scriptures in the original Greek CRUNCH, MUNCH ... I don't know nothin' about Niebuhr and Heidegger" ...CRUNCH, MUNCH...He finished the apple. "All I wanna know is: This apple I just ate,------was it sour or sweet?"

Dr. Tillich paused for a moment and answered in exemplary scholarly fashion: "I cannot possibly answer that question, for I haven't tasted your apple."

The white-haired preacher dropped the core of his apple into his crumpled paper bag, looked up at Dr. Tillich and said calmly, "Neither have you tasted my Jesus."

The 1,000 plus in attendance could not contain themselves. The auditorium erupted with applause and cheers. Dr. Tillich decided to take no more questions and promptly left the platform.